Science and the octopus 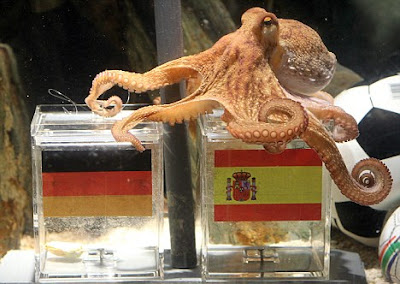 So, the mollusc wins again. Paul the Psychic Octopus, having correctly "predicted" a series of German World Cup victories over, among others, Ghana, England and Argentina, switched its tentacled allegiance to Spain just in time to watch them squarely beat the Fatherland into Sunday's final. The cephalopod's reputation for oracular infallibility is maintained. Scientific rationalism wobbles. Richard Dawkins must be quaking in his smug atheistic boots. I know I am.

As you may recall, I suggested that Paul's preference for the German flag may have been due to conditioning (which is certainly possible for these intelligent invertebrates). Presented with two pots, each containing a mussel, the octopus might be expected to choose the familiar one, simply because the flag provided a reliable indication of food. On this basis I predicted that it would continue to favour Germany.

Annoyingly, I was wrong. Even more annoyingly, the octopus was right. Is there - can there be - a scientific explanation?

According to the usual version of the story, Paul's powers were first put to the test during the 2008 European championships, when he was said to have an 80% success rate. This may not in fact be true. Octopuses tend to have very short lifespans (around 18 months is a maximum) and there have been suggestions that original Paul - who was caught near Weymouth - has since been replaced by a Mediterranean impostor. If this is true, then "Paulo" has in fact a 100% success rate. Even more impressive, if one believes in the special qualities of this particular cephalopod. For myself, I suspect that one octopus is very much like any other, and that whether this year's Paul is the same as 2008's has little bearing on his match predicting success.

The 2008 Paul would seem to have consistently predicted German victories - including in the final, where Germany lost to Spain. During the present World Cup, with one exception (Serbia) Paul again preferred the familiar German colours. The pattern was clear. And with the psychic power hypothesis challenged by the result of the Euro 08 final, the conditioning hypothesis looked the stronger contender. As to the octopus's initial preference for the German flag, this may have be due to chance. But it has also been suggested by one marine biologist that the creature may be attracted to the strong pattern of horizontal stripes found on that flag (and, indeed, on that of Spain).

To date, the octopus has made 12 predictions, six in each tournament, and was "correct" in all but 2 - a success rate of 83% (the mistakes were both in the 2008 championship, so perhaps he's simply honed his selection skills). On the other hand, he has also predicted German wins on ten occasions. The conditioning hypothesis does not require that the octopus choose the German flag every time, merely that it should display a marked preference for it. It still strikes me as plausible - there is, after all, a known scientific mechanism underlying it - but to prove it would require a much larger piece of research, employing several different octopuses and hundreds of trials.

To prove - or even render plausible - the "psychic octopus" theory would also need far more experimental data. At the very least, it would have to demonstrate its powers to predict the result of matches not involving Germany, thus eliminating any colour-conditioning effect. [Update: it is pointed out in the comments that Paul belongs to a colour-blind species of octopus - any conditioning would have to be based on pattern-recognition and shade-differentiation rather than colour. Note, though, that the teams which beat Germany in both tournaments, and which Paul differentially chose, all had a similar pattern of horizontal stripes.] The more matches correctly predicted, the greater would be the evidence - but, again, it would take hundreds of trials to demonstrate a statistically significant effect.

Ideally, the experiment would not use national flags at all, but rather variable abstract symbols randomly assigned to teams, and different on each occasion. In such a set-up, there would be nothing for the octopus to recognise, and its choice would either be truly random or the result of an unknown (possibly paranormal) factor.

But even if there were to be such an effect demonstrated, it would not prove that the octopus was actually psychic. It would show merely a positive correlation between Paul's selections and the results of matches. As it happens, I do think that, even in the absence of a proper controlled trial, such a correlation may exist. Chance may explain it, of course - though with every correct prediction it becomes more likely that something other than chance is involved. So what, other than the existence of a genuine oracular octopus, might that be?

In a word, voodoo.

When it comes to the results of actual matches, we can forget the octopus. It has no idea that it is selecting football teams, and it certainly is not psychic. On the other hand, the human audience does believe (however half-heartedly or with tongue in cheek) that Paul is predicting football results. With time, and as Paul's success has been maintained and his fame has grown, his "predictions" receive increasing attention. This must have an impact. We should thus ask whether the "psychic octopus" is affecting the psychology of the footballers. If they imagine that their success has been foretold by the octopus oracle, their self-confidence will receive a boost. By contrast, if they believe that they have been cursed by the mollusc, their football may suffer - just as someone who believes an enemy is sticking pins in a doll to magically harm them may fall ill. Of course, Germany's losing players weren't consciously thinking about the octopus while they crumbled last night (at least, not much) but they were certainly aware of it - and that awareness might just have made the difference between victory and defeat.

UPDATE: In the comments, ElFlojo84 is "veering towards the idea that this is a publicity stunt from the aquarium, where the predictions are the work of a well-informed football fan and Paul's choices are being influenced somehow". It's entirely possible. The easiest way of hoaxing the predictions would be to place a real mussel in the "correct" box and a dummy one - indistinguishable to the audience - in the one they don't want the octopus to choose. This explanation has the benefit of simplicity and I'm kicking myself that I didn't think of it. Perhaps some tabloid with a big chequebook could track down an aquarium worker and find out the truth. We should be told.

UPDATE 2: Paul chose Spain over the Netherlands to win the final, and Germany over Uruguay in the play-offs. In other words, he went for the two most familiar flags, both of which had proved to be reliable indicators of the presence of food - just as the theory of conditioning would have predicted. The "hoax" theory would suggest the same result, however, since the two selected teams are also the favourites. The voodoo effect remains to be seen.