Proof that Westminster really is impotent 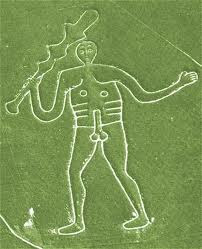 I doubt anyone will have been surprised by the news this week that women living in and around Cerne Abbas in Dorset have more babies than those resident anywhere else in the country. They do, after all, live in the presence of a famously ithyphallic chalk hill-figure, whose philoprogenitive properties are the stuff of legend. The Giant may not actually be an ancient fertility symbol (its original function being apotropaic or, more likely, merely satirical, and its probable age not much more than three hundred years rather than the thousands that used to be claimed) but its reputation as such is more than enough to account for the excess birthrate (an astonishing - for Western Europe - three children per woman).

Seeing THAT every day must surely turn anyone's thoughts to procreation. Add in the lack of much alternative entertainment in the evenings, and the likelihood that women of childbearing age who want to do rather more with their lives than become baby factories have mostly upped and left, and I don't think there's much need to appeal to the mystical powers of the cock o' the chalk.

But what's this? The district with the lowest per capita birthrate in the country is Westminster. It's a mere third that of the North Dorset village. Obviously Parliament's impotence in recent years has had a knock-on effect on the surrounding population. You can't argue with science.
Email Post
Labels: biology general weirdness Politics science