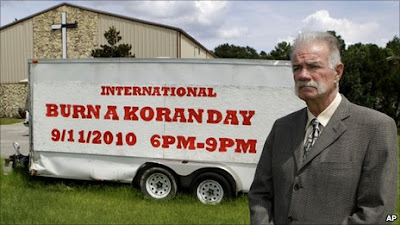 To anyone this side of the Atlantic, the name Terry Jones summons up, not a weirdly mustachioed Bible-thumper but rather the rudest and most lovable of the Monty Python team. There's an irony here, of course, since the Pythons' greatest production - the one in which Jones delivered the immortal line, "He's not the Messiah, he's a very naughty boy" - was seen in its day as almost as provocative as the oddly-named Dove World Outreach Center and its absurdly over-hyped Koran-burning. True, Life of Brian did not lead to actual violence. But it was seen by many Christians at the time as recklessly provocative, mean-spirited and blasphemous. Many generally liberal-minded people demanded it be banned or withdrawn. Today, few people can understand what all the fuss was about.

The way these incidents catch on is oddly random. The Danish cartoons of the prophet Mohammed - the reaction to which presumably provides the template for what American politicians, church leaders and others fear will happen if Jones sets light to the Word of Allah - were published months before the riots happened. And here's something that has been completely missed, so far as I can see, in the blanket and increasingly hysterical coverage of Paster Jones's stunt. Two years ago an even loonier pastor, Fred Phelps of the notorious Westboro Baptist Church, laid on his own Koran-burning event. No-one noticed.

Miffed, perhaps, that their thunder has been stolen by this upstart, the Westies have posted an old video of a burning Koran on the front page of their website, preceeded by a typical rant by Phelps, who denounces Mohammed as a charlatan and American commanders in Afghanistan for apologising after an allegation surfaced that copies of the Muslim holy book had been used for target practice. Another Koran-burning is planned for Saturday's "Burn a Koran Day", maybe in solidarity, maybe in a spirit of competitive bigotry. In any case, regardless of whether or not Jones carries out his threat I've no doubt Phelps will.

Someone else anxious to jump on the bandwagon is our very own Stephen Green of Christian Voice. He would "never burn a Koran", he proclaims tonight, "more out of respect for the feelings of others than out of fear." Right. Nevertheless he hails Jones as "obviously a man of courage and sometimes extreme things have to be done", before quoting the usual Koranic injunctions to fight unbelievers. Green is almost as bigoted as Jones and Phelps. Yet even he manages to make something approaching a valid point:

And us Christians should hang our heads in shame that for all this trouble and fear about the burning of the Koran, hardly a breath of protest was heard about the burning to death of a Pakistani Christian in March, whose wife who witnessed his death was then gang-raped by three policemen. The Italian Foreign Ministry summoned the Pakistani envoy, but why were we not all outside the nearest Pakistani Embassy or High Commission?

Compared with, say, the savage punishment of stoning facing Sakineh Ashtiani in Iran (and many others whose cases have attracted less international attention) or the worldwide scandal of "honour killings" - often in the name of religion and culture - exposed by Robert Fisk this week in the Independent, torching a book seems like a very small thing. But let's not single out the Muslim world. In the US, those of a similar theological bent to Pastor Jones have burned down abortion clinics and murdered doctors. Why not burn a Koran? It's only paper, after all, paper and ink.

There is an argument that the Koran merits a degree of consideration not afforded to other texts, not even to the Bible. A Roman Catholic woman on Newsnight yesterday suggested that a similar level of insult might be caused to members of her faith only were someone to destroy a consecrated wafer. PZ Myers did precisely that a couple of years ago, to the great upset of many Catholics, some of whom nevertheless made a point of loudly turning the other cheek. A few sent Myers death threats, but he's still here. One outraged Catholic challenged him "if you REALLY want to do a courageous, revolutionary act, [to] defecate publicly on a copy of the Quran." He didn't go quite that far, but he did nail the Body of Christ to a few torn-out pages from the Muslim scripture, emptied the contents of a garbage bin on the ensemble, and posted a photo on his blog. Did Muslims worldwide protest? Not that I've been able to discover.

It's true that book-burners, from the Emperor Ch'in Shi Huang Ti to the Nazis, have had a bad rap. We remember the quote from Cleopatra, spoken in contemplation of the (accidental) burning of the library of Alexandria: "Not you, not any other barbarian has the right to destroy a single human thought." And we also remember, perhaps, the remark attributed to the Caliph who ordered the burning of the same library, on the grounds that texts that disagreed with the Koran were blasphemous, while any that agreed with the Koran were superfluous. While that view has never been remotely mainstream in Islam it has its partisans among the hotter Muslim radicals today - the same hotheads whose reaction everyone from Obama to the Pope to Sarah Palin fears today.

Historically, though, the purpose of book-burning was to not merely to demonstrate disapproval or provocation. The idea was to destroy the book. Even in the early days of printing, officially sanctioned books were rare and expensive enough to be obliterated by a thoroughgoing campaign of censorship, even if the bonfire - traditionally in England (yes, this country had its book-burnings too) conducted by the public executioner - was largely symbolic. Books were burned, and pulped - as they still are, by order of the courts, if discovered to contain a libel - and disappeared. Not all the bonfires in all of America could remove the Koran from the world. Burning it will be a gesture, one of impotent defiance rather than of strength, born of the fears and frustrations of a section of American opinion rather than of imperialist arrogance.

It was General Petraeus who asserted that the book-burning would lead to more casualties in Afghanistan, not any Taliban warlord. (And, after all, the Taliban hardly need this provocation to encourage them to attack Americans, do they?) It was Barack Obama, not Osama Bin Laden (or whoever speaks for him these days) who claimed that it would be a "recruiting bonanza" for Al Qaeda. What we've seen over the past few days has been rampant Islamophobia - as in literal fear of Islam - among prominent liberals. It is their apocalyptic visions, rather than any grassroots revulsion in the Muslim world (which has seen, at best, a few half-hearted protests) that has made of this the latest flash-point in the clash of civilisations.

No wonder Pastor Jones, surveying the massed OB vans of the world's media camped outside his run-down church in a hitherto little-known town in Florida, can scarcely believe his luck. No wonder Fred Phelps is jealous.

UPDATE: When the news broke last night (after this post was put up)that the Gainesville Koran-burning was "on hold", the Westboro Baptists wasted little time putting out a new press release, denouncing Terry Jones as a "false prophet" who had "caved". They promise to burn both the Koran and the flag of "doomed" America on Saturday. But will anyone be there to watch?
Email Post
Labels: Fitna free speech Islam Islamophobia Koran burning multiculturalism Obama religion US politics Westboro Baptists