Ten Reasons to love the Pope

The Pope is said to be looking forward to a "joyful" visit to Britain next week. It's not clear who else is. The organisers seem to be terrified it will be a flop, even while doing their best to discourage the crowds. Even Damian Thompson is filled with foreboding, perhaps because his liberal enemies are responsible for the arrangements, while surveys suggest that grassroots Catholics are oddly indifferent to a once-in-a-lifetime opportunity to get a close-up look at their boss. Only the Protest the Pope crowd would seem to be truly looking forward to the occasion. And the Guardian and BBC, of course, who will relish the opportunity to big up the protestors.

Well the Heresiarch will not be joining in the frenzy of pope-baiting. As Brendan O'Neill astutely points out, "the great irony of this allegedly rationalist protest against the pope is that it is indulging in precisely the kind of demonology that the Catholic Church once excelled at." So what if millions of pounds of our tax-money are being spent entertaining and protecting him? He's only the spiritual figurehead of a billion people, after all. So what if he has old-fashioned views on sex and the role of women in his church? He's in his eighties and by most accounts doesn't have that much experience of the opposite sex.

So what if he has been slow to appreciate the seriousness of the child abuse scandals? As Ann Widdecombe notes, in the 1970s practically everyone was touching up children. And as she also says, the only reason the Catholic church gets a bad press is that it is too filled with Christian humility to resort to the kind of PR tactics that would get any other organisation the great headlines it deserves. (But then, if the Catholic Church was PR-savvy they wouldn't have elected Ratzinger in the first place, so it's not quite clear what she's trying to say.)

So welcome the Pope, say I. Lay out the bunting. Cheer for the man in white. Stop being such party-poopers. Let's hear it for Joseph Alois Ratzinger, Pontifex Maximus and Vicar of Christ. I mean, he's got to be more fun than Peter Tatchell. To get you started, here are ten reasons to love the pope. But I'm sure you can think of many more.

1. Julie Burchill hates him. So does Claire Rayner, who recently commented that "in all my years as a campaigner I have never felt such animus against any individual as I do against this creature." Silly woman. That pompous ass Geoffrey Robertson QC has written an entire book about how much he wants to arrest him. And did I mention Peter Tatchell? Anyone who manages to collect such an impressive roll-call of humourless, self-important and tedious enemies must be doing something right. 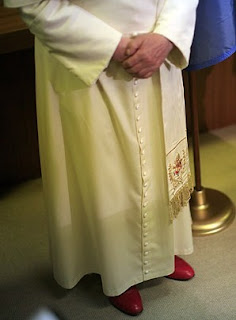 2. His shoes. Got to love those ruby slippers. They even have their own Facebook page. None of your Prada rubbish, either, as was once inaccurately reported: these are unique, handmade pumps created by a leading traditional craftsman, for His feet only.

3. His intellectual brilliance. John Paul II was a crowd-pleasing figurehead who spoke (and indeed wrote) in platitudinous soundbites, which may explain why he was so popular. I once picked up a copy of his bestseller, Crossing the Threshold of Hope. It might as well have been written by Poulo Coelho, frankly. Benedict XVI writes proper books. There's no doubt he's the brains of the organisation. His refusal to dumb down, to compromise his message to make it more palatable to the shallow and fashion-obsessed mass media has been his undoing on more than one occasion, but it gets my respect.

4. His clarity. You know where you are with the pope. You can disagree with him if you like, condemn him as an obscurantist reactionary, but at least you know what he thinks. What a contrast with our own Rowan Williams, who may well be very clever but whose thoughtscape is so profoundly complex that it can often seem that even he doesn't quite understand what he's saying.

5. His age. Well into his eighties now, he continues to travel the world, make speeches, write learned commentaries and encyclicals and otherwise keep up a hectic schedule. It's typical of the youth-obsessed culture of today's world that his venerable years are held against him. Surely we should be celebrating the fact that someone well past the usual age of retirement can still make such a huge contribution. In an era of demographic stretch and shrinking pensions, he is an example to us all.

6. The antiquity of his office. Is there not something heart-stoppingly romantic in the very name of Pope, and all its immemorial glories? Macaulay caught it well in 1840:

No other institution is left standing which carries the mind back to the times when the smoke of sacrifice rose from the Pantheon, and when camelopards and tigers bounded in the Flavian amphitheatre. The proudest royal houses are but of yesterday, when compared with the line of the Supreme Pontiffs. That line we trace back in an unbroken series, from the pope who crowned Napoleon in the nineteenth century to the pope who crowned Pepin in the eigth; and far beyond the time of Pepin the august dynasty extends, till it is lost in the twilight of fable. The republic of Venice came next in antiquity. But the republic of Venice was modern compared with the Papacy; and the republic of Venice is gone, and the Papacy remains...

7. His name. Ratzinger, that is. One cannot get two excited by the ponderous appellation Benedict XVI, but Ratzinger is a name worthy of Ian Fleming at his most baroque, a name that fits perfectly his sallow complexion and slightly sinister lisp. I can almost hear Shirley Bassey. "Ratfinger, he's the man, the man with the cross of gold... and he's so old!"

8. His preference for traditional forms of worship. I even learn that he is to insist on saying mass in Latin during his visit to Britain, despite trendy attempts to strong-arm him into using the vernacular.

9. His moral courage. Not for Ratzinger the easy way out, telling people what they want to hear so as to gain cheap popularity. Instead he witnesses to the tradition that has been entrusted to him. If it offends members of other religions or other churches, feminists, the gay rights lobby or the Guardian that is no reason to tone down his message. He would be betraying not just his faith but his integrity if he trimmed to the times as some other religious leaders have done. Instead he stands firm. Unless there's a really big row, of course, as there was when he was rude about Islam. That same fearlessness now carries him to the geopolitcal epicentre of the culture of death. Tony Blair, by contrast, won't even turn up to his own book launch, so scared is he by the prospect of a few unfriendly placards.

10. His linguistic flexibility. Even if you don't like what he's saying, you've got to admire his ability to say it fluently in half-a-dozen different languages. "That woman speaks eighteen languages, and can't say No in any of them," quipped Dorothy Parker once. Well, Joseph Ratzinger speaks eighteen languages, and can't say Sorry in any of them.
Email Post
Labels: catholicism Pope Popeweek 2010 religion