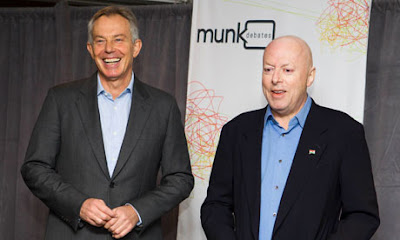 The debate in Toronto between Tony Blair and Christopher Hitchens on the question of whether or not religion is a Good Thing (transcript here) was more eagerly awaited than many heavyweight boxing contests. In the event, it lacked the baroque rhetorical flyting that marked the earlier, insult-laden encounter between Hitchens and George Galloway. Hitch was the more colourful speaker, needless to say, and he prevailed. Not only was the motion defeated (though a closer analysis of the voting suggests that the initially undecided split fairly evenly between the two) but his arguments sounded more forceful and compelling. But then he has been schooled by a lifetime of journalistic controversialism, while Blair's political success was based on a remarkable ability to agree with several opposing viewpoints simultaneously. Hitchens has never done warm words, and wasn't about to start now.

Still, I want to concentrate on Blair's contribution, which in some ways was the more interesting. His points weren't in any sense new, of course (in this debate, there are no new points) but the humble and apologetic tone in which he expressed his belief that religion did, sometimes, make the world a better place - at least, some religious people did - was striking. It might almost be said to have done Hitchens' job for him.

Greta Christina has made an astute point that religious speakers in debates like this often seem to be seeking atheists' approval.

Typically, these believers acknowledge that many religions are profoundly troubling. They share atheists' revulsion against religious hatreds and sectarian wars. They share our repugnance with religious fraud, the charlatans who abuse people's trust to swindle them out of money and sex and more. They share our disgust with willful religious ignorance, the flat denials of overwhelming scientific evidence that contradicts people's beliefs. They can totally see why many atheists are so incredulous, even outraged, about the world of religion.

But they think their religion is an exception.... And they want atheists to agree.

Christina offers two explanations for this phenomenon: that theists believe at some level that atheists - of the humanist variety - have higher (or at any rate more conscientious) moral standards than believers; and secondly that getting the atheist "stamp of approval" will help them to differentiate themselves, in their own mind, from the bad believers, the suicide bombers, the oppressors of women, the creationists... Obviously, she's talking about liberal believers who, God aside, share most of their outlook with humanists anyway. She's not talking about fundamentalists, who don't care what atheists think of them because the atheists will be going to Hell. She's talking about what might be called religious humanists, or Anglicans (of all religions), or Karen Armstrong-style fudge merchants. She could easily be talking about Tony Blair. Indeed, though it wasn't written in response to the Toronto debate, her article is a remarkably good summation of its general atmosphere.

To begin with, the former PM readily admits - how could he not? - that while he would like religion to be part of the solution, it's a big part of the problem:

Therefore, what I would say is I actually think that yes of course a lot of these conflicts have religious roots, I actually think it's possible for religious leaders to play a positive part in trying to resolve those, but in the end, it's for politics and religion to try and work out a way in which religion, in a world of globalisation that is pushing people together, can play a positive rather than negative role, and if we concentrated on that, rather than trying to drive religion out, which is futile, to concentrate instead on how we actually get people of different faiths working together, learning from each other and living with each other, I think it would be a more productive mission.

This, of course, is what his Faith Foundation is meant to be all about. Blair's position is a pragmatic one, as befits a politician:

I'm not claiming that everyone should congregate on my space, I'm simply claiming one very simple thing, that if we can't drive religion out of the world because many people of faith believe it and believe it very deeply, let's at least see how we do make religion a force for good, how we do encourage those people of faith who are trying to do good, and how we unite those against those who want to pervert religion and turn it into a badge of identity used in opposition to others.

Which is far enough as far as it goes (which is a long way towards accepting the atheist criticism, of course - see Greta Christina above). I'm sure he didn't mean to imply that it would be better for all concerned if we COULD drive religion out of the world, and that persuading members of the different religions to get along was making the best of a bad job. Still, these admissions presented Hitchens with something of an open goal:

In one sense Blair's contention is unarguable. Given that there are going to be many religious people, it is better that they should do good in the name of religion than do evil. And yes, of course, there are many selfless humanitarians who are motivated - or at any rate who believe that they are motivated - by a religious faith. A moral purist might object that it is better to do good for its own sake, rather than from a belief that God will reward the do-gooder, or that doing good is carrying out a divine command. But for the beneficiary of the good work, that scarcely matters. What matters is that someone is doing a good thing.

In making the argument for faith, Blair didn't make the argument for any particular religion. He was careful to praise the example of various religious figures, such as Jesus or Mohammed, but when he spoke of what was good in religion, he stressed compassion, altruism - not only something found in the teachings of almost every religion but the very thing that religious believers share with humanists. The quintessential thing about religion, he suggested, was not unique to religion at all. The most he could claim was that religious believers might be more likely than non-believers to devote their lives to such a cause.

It's a good dodge, but it doesn't strike at the root of the problem that Blair readily admitted when he discussed the problem of scripture. The "single most difficult argument" to counter, he said, was that "the bad that is done in the name of religion is intrinsically grounded in the scripture of religion." His answer seemed to be that scripture should be reinterpreted in the light of the modern world. And of course that is what "progressive" religious types have always done. So that when the Bible says that homosexuality is an abomination unto the Lord or that children who answer their parents back should be stoned to death, or the Koran says that Muslims have a duty to make war on unbelievers, or whatever, the correct response is to say that we must interpret the scripture in a more "sophisticated" manner, until what it "really means" is almost the precise opposite of what it appears to say.

In other words, you should pick and choose the bits you like and ignore the rest. Which is fair enough, if you don't then continue to claim that the scripture is inspired by God, or even the direct Word of God. Some religious teachers do make such an admission. Most, though, try to have things both ways.

The problem here goes beyond religious texts. Put simply, the bits of religion that cause the problem - the tribalism, the archaic attitudes towards sex and the position of women, the cruel attributes of God - are precisely what makes each religion distinctive, that anchor every faith in a particularity and definiteness. Not to mention the doctrines: God chose the Jews, God disapproves of condoms (at least He did until last week), God comes in Three Persons (no he doesn't: there is No God but Allah and Mohammed is His prophet)... Whereas the bits that Tony Blair wants to stress, the things that every religion shares with every other - the altruism and so on - are common also to humanism. They aren't really "religion" at all, however many believers do good things in religion's name.

As far as I can see, this is insoluble. Religion, like the IRA, isn't going to go away, which is why Blair's modest project of encouraging different religious people to work together for unobjectionable good ends is about the best we can hope for. But it will never be fully realised, because if it were the differences between the various religions would evaporate - and if that happened, then religion itself would disappear to be replaced by a more-or-less spiritualised humanism. In which case, religion would lose its purchase on the human imagination, which comes from the myths, doctrines and scriptural teachings that make every religion distinct and dangerous. Result: less religiously-inspired humanitarianism, which would probably just mean LESS humanitarianism. Oh yes it would.

Blair wants to say - spends much of his life saying, in fact - that the "true" essence of religion lies in compassion and observance of the Golden Rule (a biological phenomen also known as reciprocal altruism) while religiously motivated war and intolerance is a perversion of its inner spirit. But religion isn't just about being generally nice and loving one's neighbour. It's also about the claim that particular beliefs are true, and (just as importantly) about other beliefs not being true. What dooms any universalist project is that religious beliefs make little sense in the absence of contrary ideas. Even when Europe was almost entirely Christian there were heretics, Jews and Muslim Infidels to oppose; later Catholics and Protestants had each other to despise. Further afield, Hindus and Muslims squared up (the Sikh gurus' largely unsuccessful attempts to reconcile the two notwithstanding) and there have always been lots of different sorts of Buddhist. Although, to be fair, Buddhists don't waste too much of their time hating one another.

Everyone agrees - well, Tony Blair and Christopher Hitchens agree - that religious strife is a Bad Thing. They only disagree about whether or not it represents the true nature of religion, or whether the altruistic, compassionate dimension is the fundamental one. It's not so simple. There is an energy that propels religion, that turns some people into saints of compassion and others into suicide bombers; and it's the same energy in both cases. You can't have one without the other. It's not just wrong, it's wicked, to pretend otherwise.
Email Post
Labels: atheism Blair religion