Has the pope really gone soft on condoms? 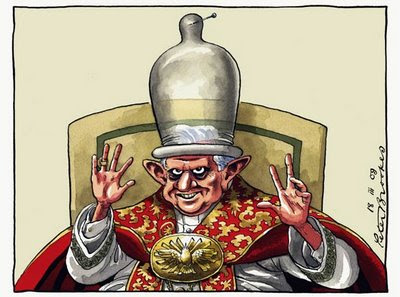 Two big stories this morning: the Pope apparently endorsing the use of condoms to prevent the spread of HIV/AIDS, and Ed Balls telling Andrew Marr that New Labour might have gone a bit far in its attack on civil liberties. I'm looking forward to Carter-Ruck issuing a denunciation of super-injunctions, Tony Blair handing himself in for war crimes and the International Panel on Climate Change predicting an imminent freezing-over of Hell. Or even, as Zeno offers on Twitter, scientists discovering that homeopathy actually works.

Anyway, the Pope - quoted in pre-publicity for a forthcoming biography - seems to have created the biggest stir. What he said was fairly modest and tentative - merely that "there may be a basis in the case of some individuals, as perhaps when a male prostitute uses a condom, where this can be a first step in the direction of a moralization." He wasn't actually advocating condom-use even in these circumstances. The interview doesn't mean that "the Pontiff has ended the Church’s absolute ban on the use of condoms" as Jonathan Wynne-Jones has it in the Telegraph. But still, the Pope - and not just any Pope, but Ratzinger - saying something sensible about condoms is undoubtedly big news. If only in the sense that Man Bites Dog is big news.

Some of the media excitement undoubtedly comes down to a rather simplistic misunderstanding of the Vatican's position on condoms. The assumption seems to be that the Pope objects to condoms as such; in fact, the objection is to what they do, which is to prevent conception. It may or may not be the primary intention (that depends) but in heterosexual couplings it is at the very least a side-effect of condom use that the act is not "open" to the transmission of life. For the Catholic Church, that is what sex is all about; other things, such as reinforcing the love-bond between a couple, or pleasure, are secondary (and, in the case of pleasure, historically rather questionable). Gay sex, of course, isn't open to the transmission of life with or without a condom. Thus homosexuality is, effectively, already "sex-with-a-condom", whether or not condoms are actually being used.

The Pope appears to have been making a point about degrees of badness. He brought up the example of gay prostitution, which is presumably the worst thing he can conceive of, combining as it does the "intrinsic disorder" of homosexuality with the anti-human (as he would see it) squalor of commercial sex. But his argument would no doubt apply equally to other gay sexual situations where there is s significant risk of HIV transmission, such as cottaging. The most important consideration here is that the condom is not being used, even accidentally, as a method of contraception. The normal argument against condoms therefore doesn't apply. The homosexual act is not made worse by the presence of a condom. In those limited circumstances, however, the "responsibility" shown by the condom-wearer indicates that he has the first glimmerings of conscience. In the Pope's mind, condom-use may be the first stage on a journey of enlightenment that ends with him giving up the gayness altogether, finding a good Catholic virgin to marry and settling down to the morally virtuous production of ten or twelve children.

Janet Smith explains this with a rather striking analogy:

If someone was going to rob a bank and was determined to use a gun, it would better for that person to use a gun that had no bullets in it. It would reduce the likelihood of fatal injuries. But it is not the task of the Church to instruct potential bank robbers how to rob banks more safely and certainly not the task of the Church to support programs of providing potential bank robbers with guns that could not use bullets. Nonetheless, the intent of a bank robber to rob a bank in a way that is safer for the employees and customers of the bank may indicate an element of moral responsibility that could be a step towards eventual understanding of the immorality of bank robbing.

So, no big revolution, then? I'm not so sure. Smith writes that "the Holy Father is not making a point about whether the use of a condom is contraceptive or even whether it reduces the evil of a homosexual sexual act" but merely "about the psychological state of some who might use condoms." Surely, though, his words imply that the transmission of HIV is a bad thing, and that preventing its spread is a good thing. The Pope does indeed appear to believe that protected gay sex, while still an evil, is a lesser evil than unprotected gay sex with an inherent risk of infection. This strikes me as being potentially revolutionary in three ways.

First of all, it admits the possibility of moral discrimination within gay sexual encounters; that by showing concern for one another the partners are acting in meritorious ways. It follows that homosexuality might be immoral but it is not amoral. It is an area in which virtues of responsibility, forethought, conscientiousness, putting another's interests before one's own immediate pleasure can be manifested. What other shades of discrimination might be teased out of this discovery? Perhaps the Pope (or his successor, or his successor's successor) might one day be able to proclaim the value of faithful, loving, stable relationships between same-sex partners. There's a long way to go, but this could come to be seen as the vital first step.

The second important element concerns the narrower question of condoms and HIV. The case of gay prostitution is fairly straightforward, since the benefit of disease-prevention doesn't have to be balanced against the "evil" of contraception. Nevertheless, by acknowledging that containing infection is a good in itself the Pope has already waved goodbye to moral absolutism. He will find it hard to argue that condoms are acceptable for gay sex but unacceptable for heterosexual encounters, even where there is a similar risk of disease. The Catholic doctrine may be that sexual acts must be "open to life"; but does that imply that they should also be open to death? Ratzinger may continue to insist that abstinence is the best policy. He now at least appears to be saying that the best need not be the enemy of the good.

The third point goes beyond both homosexuality and AIDS. Simply put, by allowing an element of nuance to override a rigid application of rules the Pope may be inching away from the old claim that his church embodies Absolute Truth towards a more flexible, even humble, attitude - an acknowledgement of the complexity of modern life and moral problems, of the possibility of shades of grey. In such a world, Popes - like anyone else seeking to give advice on moral or social questions - will have to argue their case from first principles, will have to appeal to facts more than to Holy Writ or abstract theological principles when seeking to persuade.

Of course, it's a very small beginning. Damian Thompson is right - for now - that "the core of Catholic teaching on contraception... remains intact". But Ratzinger has opened the door just a crack. Or perhaps he has taken a peek inside Pandora's Box. Who knows where it might lead?
Email Post
Labels: catholicism Pope religion sexuality