Other times, other adverts

Thanks to Tania Glyde on Twitter for pointing me (and countless others) in the direction of a priceless collection of politically incorrect advertisements from (mostly) the Forties through to the Sixties - a world whose slow passing is hymned in Mad Men. 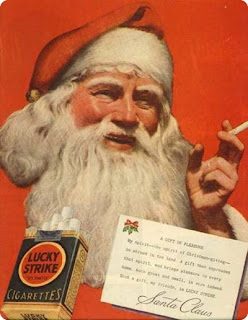 This should bring some pre-Yuletide cheer to the likes of Leg-Iron and Dick Puddlecote. I'm seriously considering using it as my Christmas card.

While I can think of a few people who might enjoy this: 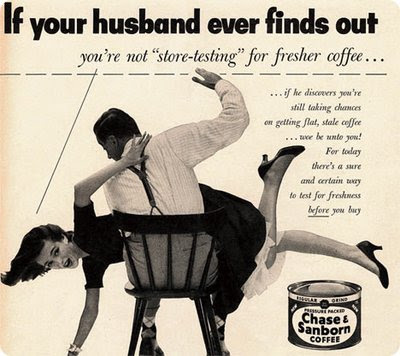 And this is, well, just weird.

But take a look at them all.

Advertising can certainly provide an illuminating peek into the attitudes and assumptions of a former time, as well as affording us a warm glow of self-satisfaction. But it's lazy to assume that previous generations were simply blinkered and bigoted (or that we're not) and in any case at this distance it's not always clear who is the butt of the joke. An advert for morning-sickness pills bearing the strapline "Now she can cook breakfast again" is as much a comment on stereotypical male selfishness as an indulgence of it. And one claiming that a certain brand of cigarettes is recommended by doctors reflects a dawning awareness that smoking is, in fact, bad for one's health. These days, anyone taking their sociological data exclusively from advertising would probably conclude that men are uniformly clueless and incompetent and ethnic minorities, instead of being the racial stereotypes of yore, scarcely even exist.

What I can't see is any evidence that social progress was derailed as a result of advertising messages of this type. On the contrary, they look absurd today precisely because they had little or no role in shaping society. And it is modern manners, not the bureaucratic preciousness of an Advertising Standards Authority, that would prevent any company attempting to run similar campaigns today.
Email Post
Labels: advertising culture gender politics