Does God care about animals?

It isn't quite April 1st yet, so I suppose this must be true.

New Humanist reports that PETA, the US animal rights group, is objecting to a new "inclusive language" version of the Bible, on the grounds that the language isn't quite inclusive enough. The translators' politically correct agenda extends only to human beings, you see: animals are routinely afforded the pronoun "it". I find it hard to think of a more inclusive pronoun than "it", personally - it's not as though creatures are assumed to be male - but PETA nevertheless finds it rather undignified. Animals are people too - a spokesman is quoted as claiming that the pronoun "denies them something" and that "God cares about animals". "He or she" would have been both inclusive and respectful of the unique personality of each of God's creatures, from the elephant down to the humblest flea. We're not told how the translators should tackle the pronounisation of hermaphrodites, such as earthworms.

This is all a trifle odd. The strongest argument in favour of inclusive language, where human beings are concerned, is that the old grammatical principle that "the male embraces the female" is offensive to women. In other words, that many women are offended by it. Are animals offended by being called "it"? Are they even aware of such nuances of language? And if not, why should it matter?

As for God caring about animals, the evidence for this in the Bible would seem ambiguous at best. Yes, the Lord did instruct Noah to rescue two animals of every kind (rather more of the edible ones) and preserve them from the Flood. But the cramped conditions of the Ark would scarcely answer to modern animal welfare standards - and with only one breeding pair of each species I worry about the health of the genepool. And what of all the myriads of other creatures, those not lucky enough to be selected by Noah? God was quite happy to drown them all for the sins of humanity, it would seem. Perhaps he cares more about fish.

In the Old Testament, God's concern for animals seems to revolve mainly around their suitability for eating and sacrifice. The Bible records, usually without adverse comment, several instances of what looks like casual cruelty. In Numbers, Balaam beats his ass (which does, however, answer back). A little later, in Judges, Samson catches 300 foxes, ties their tails together and sets them on fire, just to frighten the Philistines. 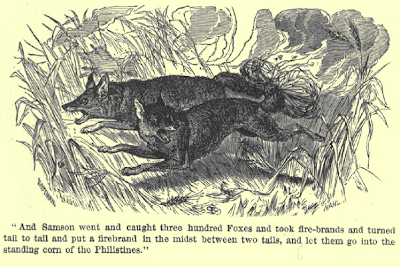 And God himself takes revenge on the serpent that tempted Eve: "On thy belly shall thy go, and dust thy shall eat all the days of thy life". He might, though, be said to have a soft spot for frogs and locusts, which he sent to plague the Egyptians. And, as Alexander Waugh noted in his eccentric biography of the deity, God does have at least two pets, Leviathan and Behemoth. Sadly, though, "When God has finished playing with them his intention is to crush their heads and feed their flesh to the wild beasts of the wilderness". Ouch.

The New Testament starts off well, with Jesus talking warmly about the birds of the air and claiming that not one sparrow falls to the ground without God being aware of it. But before long he is casting demons, with cavalier disdain, into an entire herd of quite blameless pigs. Not, I would think, quite the behaviour PETA would want to encourage.
Email Post
Labels: Christianity religion respect