Hooray for the daffodil police 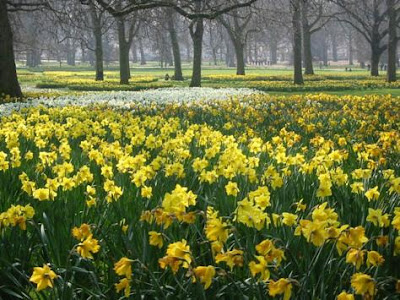 The daffodils are beginning to flower in the city where I now live, glorious along the riverbank. A symbol of Welshness it may officially be, but nothing - even the all-white inhabitants of picture-postcard fictional murder hotspots - is as evocative of England in the springtime as hosts of golden daffodils, fluttering and dancing in the breeze. They are cheap and plentiful, perhaps, but as Wordsworth noted they take pleasure in crowds, which is why they never look more joyous or spectacular than when arrayed in public parks, a common resource. Conversely, cut at the stem and dumped in jugs of water, they hang forlornly and quickly droop. "I gazed and gazed," wrote the poet, "but little thought /What wealth the show to me had brought." He did not take a scythe to the jocund company, congratulating himself on depriving others of the view.

But not everyone has the poetic sensibility. Not, for example, Jane Errington, a mother from Poole who was quite happy to let her three angelic daughters rip up several handfuls of daffodils from Whitecliffe Park. Not surprisingly, someone complained - either Councillor Peter Adams or someone close to him. "We are very proud of our parks and can't have people ripping up public property," he is quoted as saying. "The parents were encouraging them to do it and it is unacceptable." Quite right too.

The police turned up - this detail has been the focus of attention for a media ever-attuned for stories of bureacratic heavy-handedness and lazy mugger-dodging cops. Two constables are said to have observed the situation for around twenty minutes before walking up to the mother and her partner and pointing out that ripping out the council flowers constituted criminal damage. Quite apart from being monstrously anti-social. Ms Errington was furious - not with her delinquent children, though, but with the police who upset her little darlings. She suggests that "the police have better ways to spend their time and taxpayers' money." But do they? It's taxpayer's money, after all, that funds the daffodils in the first place and I for one am pleased that the police consider protecting the public environment a worthy use of their time.

Not that the police operation is beyond criticism. It's strange that the officers wasted twenty minutes "observing" the situation - during which time large numbers of daffodils will have been wantonly destroyed. Even then, it seems, it took Cllr Adams to (by his own account) "walk across to them and point out the family responsible" before anything was done. No-one was arrested (though they might well have been) and, unless the reports are missing something - the parents haven't even been asked to pay for replacing the daffodils. So what is Ms Errington's problem? Desire for publicity, perhaps? She claimed that her daughters had picked "only" around twenty flowers (Cllr Adams asserts that it was more like 70), and that she had no knowledge of what they were up to. The youngest is just four. Perhaps she was too busy watching the police watching her family to pay any attention to them herself.

The story doesn't say much for the Big Society, though, does it? Neglectful parents, disrespect for public amenities, police who sit around "observing" the daffodil massacre before plucking up the courage to intervene. The press, quick to decry or ridicule the "daffodil police" rather than ask what sort of society it is where parents don't, pre-emptively and as a matter of course, instill in their children that in a public park you DO NOT PICK THE FLOWERS. Even Cllr Adams, proud as he is of his council's floral display, and in a position of some authority, preferred to wait for the police to show up instead of complaining to the family himself. As a man of mature years, he was perhaps afraid the mother might accuse him of having some improper motive in noticing the behaviour of her daughters.
Email Post
Labels: Big Society police Politics