Extraordinary people the Japanese. They have an intimate relationship with nature. They are intensely orderly. That's why there hasn't been any looting after the Tsunami (it's the culture, you see; nothing to do with there being nothing left to loot). Their buildings don't fall down, but they do build nuclear powerstations in seismically vulnerable places, just to show how modern they are. The Japanese economy was already shot to pieces before these disasters struck, and this is the final straw. Or perhaps it will give them just the impetus they need to rediscover their national mojo, rather like being bombed to pieces by the US Air Force did all those years ago.

There's been an amazing amount of guff along these lines in the past few days, far more than you usually get following a national disaster. The earthquake/tsunami/nuclear meltdown has provided a convenient excuse for what seems to be an ever-present need to psychonalyse the Japanese. Lesley Downer is at it in the Telegraph, waxing lyrical about the low crime-rate, the socially devastating implications of standing up to take a shower and "Mount Fuji, eternally smoking." Since she's one of very few Westerners ever to train as a geisha, I assume she knows something about Japan - but as various commenters point out, it's almost impossible to find a photo of Mount Fuji fuming. Perhaps it just looks as though it should.

Never mind. The eternally (but invisibly) smoking Fuji is probably a metaphor for a people given to concealment, who make the allegedly uptight British seem like a nation of emotionally incontinent over-sharers, like the Italians. (Did you see what I did there?) Who knows what these people are really thinking? Inscrutability, the preservation of "face", stoicism, obedience to strict social disciplines - the natural consequence of living in tight confinement on a volcanic island. Perhaps it's all down to Shinto, with its acknowledgement of the animistic power of the natural world (and, unlike Christianity, no expectation that nature will respect human rationality) or Zen Buddhism with its attachment to the transience of things. Or perhaps it's the Samurai tradition, or there are lessons to be found in the tea ceremony. Or failing that, karaoke.

Alternatively, try Hokusai, the woodblock artist whose evocation of The Great Wave Off Kanagawa has been reproduced and discussed everywhere during the past week. The Wave threatens disaster, indifferent to the fate of the fishermen desperately rowing for shore. It is magnificent but deadly, and its magnificence and deadliness are of a piece. What a quintessentially Japanese idea.

But it's another Hokusai image I have in mind - the one that hangs in Brendan Cooper's office in Mad Men, the one known in the West as The Dream of the Fisherman's Wife. Though actually she's meant to be a pearl diver. You know the one. It's the one with the octopus. This one: 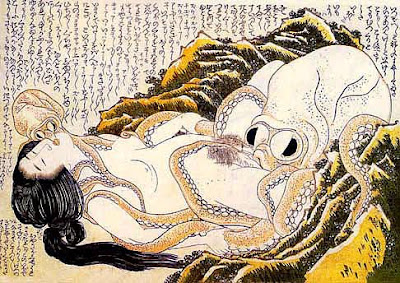 Now there's a metaphor for current situation: a huge mutant monster sucking lasciviously on a human body. She is, in this fantasy, orgasmic. But does the cephalopod actually care? Or is it - he? - about to engulf her, to eat her out literally as well as figuratively? Hard to tell. But either way, and whatever strange impulse brought her into the creature's lair, she is now totally at its mercy. The woman is obviously Japan, dangerously hooked on a transgressive form of energy generation, thinking only of its physical pleasures, oblivious to the precariousness of its situation. The octopus - a natural force, but one monstrously deformed by the human imagination - is a reactor about to blow.
Email Post
Labels: environment Japan nuclear power