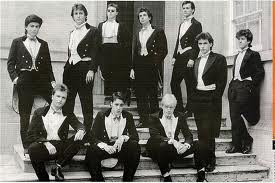 Will David Cameron ever live down his Bullingdon days? He was asked about his misspent youth once more this morning by Evan Davis. His answer, as before, was that "we all do stupid things when we're young". In response Labour put out a prim press-release stating that he "needs to start admitting what he did and start taking responsibility for what he shrugs off as youthful indiscretions." According to the New Statesman's George Eaton, Labour "regards this as legitimate political territory."

What exactly did David Cameron get up to with fellow members of the Bullingdon club?

Jim Pickard of the FT offered a reasonably accurate description of Cameron's most notorious evening with the Buller last month. The closest thing to a contemporary account, however, was provided by Sebastian Shakespeare in an essay collection entitled The Oxford Myth, which came out in 1988 (it was edited by Boris Johnson's sister Rachel, and Boris himself contributed a memorable essay on the inner workings of the Oxford Union which, shall we say, explains quite a lot about his subsequent career).


In the summer of 1987 the members hired a double decker bus and brought with them a case of Bollinger to drink while they toured the town and nearby country lanes. They eventually ended up at a restaurant outside Oxford and the bus waited for them for the duration of the meal, at which there was a lot of sconcing and toasting. On their return they thought it would be amusing to do a round of social calls and they paid a visit to an undergraduate, who lived above a restaurant in St Clement's, intending to trash his room. One member scaled the drainpipe while the others threw some potted shrubs at the door. However, one pot unfortunately went through the restaurant window. The panic-stricken student, holed up in his flat, called the police, who came upon the scene within minutes. Those caught were taken to the cells while two members were later tracked down by sniffer dogs in Merton Rose Garden.

Shakespeare - who went on to be the Evening Standard's Diary editor - also gives details of other Bullingdon parties of that era, events which Cameron may or may not have attended but which Boris Johnson almost certainly did. For example:


Besides the summer events there is also the Buller Brekker. In Easter 1986 it took place in Woodstock at the Bear Hotel where they hired two prostitutes: "we always hire whores". Prostitutes were paid extra money by members who wanted to use them and they were taken off into another room. Otherwise they just sported themselves and challenged individuals, egging them on. "There is not really much point in hiring a prostitute if you consume two bottles of champagne. Also, if you have twelve friends standing around it takes quite an effort of will to go for it."


Shakespeare's source (unnamed, but possibly Ralph Perry-Robinson) doesn't name names but does given the following assessment of the general mood:


The Bullingdon is great fun to be at but if you happen to arrive late you walk in and you notice everyone's lolling around and only uttering vague and intermittent words. When you're drunk everything seems much better and it doesn't matter if there are long patches of torpor and people slumping off chairs. The Bullingdon is something you feel very happy about a year after, but one feels frightful about the morning after.

Not to mention twenty years later when you're lecturing young people about responsibility...