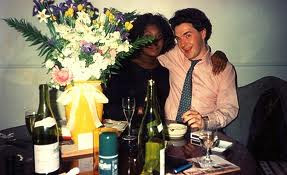 The story of George Osborne, the exotic escort and the white powder has been hidden in plain sight for almost a decade now, ever since his mate Andy Coulson splashed it in the News of the World. Libel fears alone can't explain why the tale - complete with what looks to be a highly compromising photograph - didn't become a bigger story at the time, or indeed later as Osborne continued his steady climb up the greasy pole. But the media made little of it, nor did his political opponents, even as Natalie Rowe publicly mulled her memoirs. It remained background noise. Yet it never quite went away.

Two of her former clients are in Tory leader David Cameron’s top team today, while the other two are former Tory ministers – one was in the Cabinet. Her £1million memoirs – already snapped up by a major publisher – threaten to send shockwaves through David Cameron’s party ahead of next year’s general election.

She says she had repeated sex sessions with them over a year-long period when they paid to be sex slaves. One snorted copious amounts of cocaine during the sessions.

“I had them barking like dogs and begging for mercy,” she said. “Quite often they would take me wholly in their confidence, discussing deep, personal matters about their past and their thoughts on other politicians. Most of them are desperately insecure and at war with their own egos.

It seems that the memoirs are finally coming out. Rowe has given a mildly revealing interview to the Australian media. Panorama is likely to feature the story as part of its ongoing investigation into News International's newsgathering techniques. Is George Osborne's past finally going to catch up with him?

In the interview, Natalie Rowe - escort, dominatrix or "vice madam" according to taste - now claims that George Osborne took cocaine in her company (something he has always denied) and that the two were "more than friends". Guido adds the charming detail that, "during kinky paid-for sex and cocaine sessions" George used the safe word "Louise". That's a VERY strange safe word, even though the then Miss Bagshawe could be pretty scary. Even more embarrassingly, perhaps ("thoughts on other politicians"?) George referred to his then boss William Hague, at that time posing as the scary face of the Tory right, as "insipid", a word Natalie Rowe had to look up.

But still. Osborne was young at the time, fresh-faced and stil nursing the remnants of a hangover from his last Bullingdon knees-up. The more lurid rumours and allegations may turn out to be entirely untrue. And a youthful friendship (even more than friendship - though if Guido's claim that she was charging him £350 a time (in 1994!) is true, it can't have been much more than friendship, and might have been much less) with a young lady who didn't know the meaning of "insipid" and didn't earn her money working for a bank bespeaks an encouraging broadmindedness and tolerance. In the social circles in which he moved, moreover, he would have been very prim and buttoned-up indeed not to indulge in the occasional snort of the white stuff. So probably no biggie.

Obviously the story intersects with larger matters - the phone-hacking enquiry (Natalie Rowe seems to have been among the victims), Andy Coulson's subsequent career in Downing Street, drugs policy, or the question of whether a politician's youthful indiscretions should have any bearing whatever on their subsequent career:

And I said to George jokingly that when you're prime minister one day I'll have all the dirty goods on you. And he laughed and took a big fat line of cocaine.

If George Osborne can - as a fully mature adult - get away with disgracing his great office by using the word "wankers" at an awards ceremony, it's unlikely that the disinterment of something that everyone already knew will scupper him. Rather more disturbing is the information that, even now, "Dave and George basically like laughing at losers" - not an attractive trait at any time and certainly unfortunate at a time when government policy is creating far more losers than winners.

Today's report by Sir John Vickers into the banking industry is, of course, of far greater significance to everyone in the country than whatever George Osborne got up to with other consenting adults as a young man. It has, so far, garnered more headlines. But the combination of sex, drugs and politics is a very strong one, and the soap-opera of politics often turns out to hold greater interest than the serious business of government.

I can't help thinking of Blondie...

Ah Natalie, it seemed like paradise
When she spanked me, it always felt so nice
I'd shout Louise! when I was black and blue

Those were the days, a line of best cocaine
with Natalie, would get me through the pain
I'd shout Louise, when I was black and blue