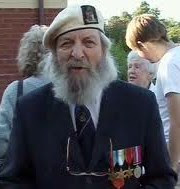 It's good that Norman Scarth has been released by the Court of Appeal. Prison is no place for an 85-year old war veteran in failing health, or indeed for any 85-year old (except perhaps a serial killer). No obvious public interest was being served by his continued detention - at least, no public interest than would not be better served by keeping him in hospital, which is where he almost certainly belongs.

Scarth had been sentenced to six months for contempt of court after covertly recording a court and verbally abusing a female usher. It seemed harsh punishment, even for a man who - according to the High Court Judge who initially upheld the sentence - has repeatedly "displayed utter contempt for all lawyers and judges". He had already been arrested once this year while taking part in a disruption of Birkenhead county court in March: he was there to support a man who preferred not to pay his council tax and purported to arrest the judge. The incident so rattled the authorities that state privileges were invoked to have illegally filmed footage of the demonstration removed from YouTube. You don't mess with judges. Everyone knows (or ought to know) that.

But what, exactly, is society meant to do with the likes of Norman Scarth? Aggressive, deluded, a compulsive nuisance, a vexatious litigant, a writer of crank letters, a deranged conspiracy theorist, a man who, moreover, has served several years for attacking a bailliff with a chainsaw, Scarth is nevertheless not quite mad enough to be confined permanently to an institution. Though it is unsurprising to learn that he has spent time in psychiatric care. And equally unsurprising to learn that he did not appreciate the NHS's efforts to help him.

Instead, aged 79, weighing 8 stone, with spondulosis, osteo-arthritis & congenital fusion of the spine, in double handcuffs, escorted by three sadistic screws & a 'nurse', I was unlawfully carted off to Newton Lodge Gulag ‘Mental Hospital’, Wakefield, not as a patient (neither needing nor receiving any treatment), but a captive, just as much as Terry Waite, John McCarthy, Brian Keenan in Beirut, Daniel Pearl in Pakistan, Ken Bigley & Margaret Hassan in Iraq. I never expected to be let out alive, but by a miracle it happened, & here I am, still trying to waken the nation to the corruption which is rampant throughout this ruthless, lawless, murderous & merciless ‘1984’ Police State. And STILL under attack from the evil ones!

That, by the way, is a good sample of Scarth's self-dramatizing, self-pitying, paranoid prose, much more of which can be discovered on his blog. Lord Justice Pitchford, ordering his release, noted that Scarth was "an unusual individual in that the nature of his personality disorder means that he is not one of those who is likely to see the error of his ways and, to use technical language, purge his contempt."

Scarth has a long catalogue of complaints against the powers that be, which range from claims that the state stole his savings and rigged an election in which he obtained 66 votes to a bizarre claim that his local library has been taken over by agents of Common Purpose. The underlying theme in his weltanshaung, so far as one can be deduced, is that Britain has been taken over by Nazis, indeed by people "worse than the Nazis". Typical of the evidence he sees of the conspiracy against him is the fact that the Conservative Party failed to adopt him (rather than David Davis) as its candidate in the 2008 Haltemprice and Howden by-election. He stood as an Independent instead.

If Norman Scarth deserves a modicum of sympathy due to his age and mental and physical infirmity, the same cannot be said for his supporters. Some are well-intentioned but gullible people naturally distressed by the sight of an old man being manhandled and banged up - especially one who refuses to appear in public without a row of medals. Even Cranmer has been suckered into backing him, no doubt in his case out of an excess of Christian compassion. But for the most part Scarth's camp encompasses an online lunatic fringe of sociopaths - Madeleine McCann theorists, ranty bloggers, right-wing anarchists, followers of David Icke, proponents of weird constitutional theories, tax-evaders. Claiming to have Norman's interests at heart, they sustain and promote his delusions, presenting a sick man who clearly needs help as a champion of civil rights.

Targeted by corrupt lawyers and judges West Yorkshire Police were sent out to terrorise Norman, who lived under siege for eleven months before riot police illegally forced an entry into his home and brutally assaulted him. The Police maliciously prosecuted Norman for a minor injury to a bailiff. There was no fair trial: there was perjury by officers, judicial obstruction of key defence witnesses and the press were banned. Defamed by the corrupt judge as a ‘dangerous man’ he was sentenced to 10 years. His appeal against conviction was obstructed by the legal establishment, the judiciary, the Court Service and the Prison Service; and then permission to appeal was refused. His lawsuit against West Yorkshire Police has also been obstructed by conspiracy and collusion. Norman’s treatment in a succession of hellhole prisons has been inhumane - savage and brutal. None of it is justifiable. He has borne his incarceration with the dignity, determination and courage that few can match. He is a frail old man who works tirelessly for many long hours, often cooped up in his cell, trying to expose an evil for the sake of ALL OUR FREEDOMS.

Scarth is no Walter Wolfgang. Nor is he just a harmless eccentric. And the British prison system, for all its faults (and they are many) does not go out of its way to torture war veterans. Let's get real. Scarth's plight raises questions about how society treats someone who cannot, or will not, conform to the basic decencies of normal behaviour, who threatens officials, who treats every attempt to aid him as evidence of a massive Nazi conspiracy, who is, in short, no less an anti-social menace than a teenage ASBO-wielding vandal. But it is not a national scandal. Just a very sad, and probably unavoidable, tale of mental decline.