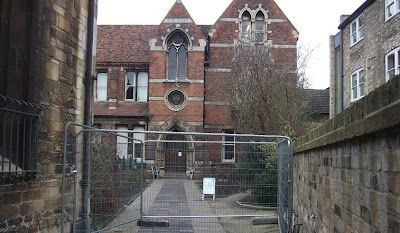 Dominique Strauss Kahn will be addressing the Cambridge Union this evening. Well, that's the plan. Personally I'll be surprised if he gets to say anything. To feminist campaigners the former head of the IMF and longtime key figure in French politics can only ever be an alleged rapist, a subform of life indistinguishable in all relevant respects to a convicted rapist. His presence in Cambridge, where he is supposed to be speaking about the global economy rather than his legal difficulties, is thus an insult to womankind. He must, and probably will, be howled down -- just as David Willetts was howled down late last year for the less obviously serious offence of being the minister in charge of higher education.

Yesterday vandals (or what the Guardian describes as "activists") defaced the Union building with anti-DSK slogans. "This house supports rape culture." Earlier today it was already prepared for the coming siege, with hastily-erected crash barriers and beefy security men wandering around in high visibility jackets. This lunchtime saw a rally of his opponents featuring, among others, Douglas Wigdor, lawyer for DSK's accuser (the New York chambermaid Nafissatou Diallo) and Cath Elliott of CIF fame. No doubt it was an uplifting occasion. CU Women's Officer Ruth Graham tweeted that it was "absolutely fantastic" and the speeches had been "incredibly moving".

DSK, you may remember, was released after the case against him collapsed, not because of some pan-rapist conspiracy but because his accuser's credibility was fatally damaged. He has, it is true, faced other allegations. Journalist Tristane Banon accused him of sexual assault on a TV chat show some years ago, and he was briefly arrested in France last month after he was linked to a Lille prostitution ring. He has long been rumoured to frequent upmarket brothels and has what some might consider to be an excessive sexual appetite. Cambridge's student feminists are more than welcome to dislike him. But he has never been convicted of anything and, thankfully, university women's committees do not get to decide questions of guilt and innocence. 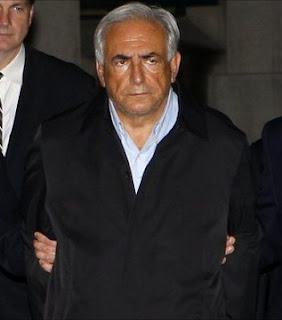 In a typically narcissistic statement, Cambridge University Women's Campaign said that inviting DSK to talk about the global economy despite the allegations against him "feeds an existent culture of silence and shame around rape, in which alleged perpetrators are given a platform mostly denied to survivors of sexual violence". Furthermore, "By inviting him to speak, the Cambridge Union risks colluding with attitudes that condone or trivialise violence against women."

But he is not in Cambridge to promote his Don Juanish lifestyle, to offer dating tips or to speak out on behalf of convicted rapists everywhere. He's there to discuss the global economy, a subject that he might be said to know something about. As the Cambridge Union said in a statement, they've been trying to get him to speak for several years.

He was not invited after or as a result of the circumstances surrounding his departure from the IMF... Mr Strauss-Kahn is exceptionally well qualified to speak on some of the most prominent international headlines of 2012, namely the global financial crisis and the French Presidential election, and so we believe he will give a pertinent and interesting speech.

Hard though this must be for the protesters to understand, the fact that DSK has faced allegations of sexual misconduct does not negate his political expertise. By seeking to deny Cambridge students - the next generation of this country's leaders - the benefit of his insights into finance and diplomacy, his opponents are feeding their own "rape culture" which seeks to turn each and every issue into a discussion about sexual violence. The Union is not "giving a platform" to an alleged rapist but to the former head of the IMF.

The campaigners have determined, in effect, but because of what he is alleged to have done, he must henceforth be a non-person, with no right to speak publicly about anything. Ironically for a group who claim to detect a "culture of silence and shame around rape" their success in attracting support and publicity for their attempt to silence and shame both Strauss-Kahn and the Cambridge Union reveals the precise opposite: the peculiarly intense focus in our culture on sexual crimes, the increasing intolerance shown towards anyone facing even unsubstantiated accusations of sexual misconduct, the synecdoche that would reduce the former IMF chief to his hyperactive penis.

Rape is a very serious crime and rightly attracts heavy prison sentences. But it is not the only thing that matters, and it is not more important than the global economy. And it's ludicrous to see the international hounding that DSK has been subjected to since his arrest in New York last year as evidence of the trivialising of violence against women. On the contrary, for most of the world, Strauss-Kahn's professional achievements are now beside the point. He's the unshaven, shady-looking figure in the notorious photo doing the perp walk.

The protesters will no doubt dismiss the argument (made by the Union) that DSK has a right to freedom of speech. They, after all, have their own right to protest. But the right to protest is a dangerous thing when it becomes a right to silence, a right to bully, a right not only to prevent a speaker from speaking but (even more importantly) the right of others to listen to what he has to say.
Email Post
Labels: Cambridge Crime economy free speech gender politics