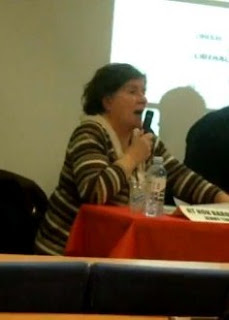 No-one should be too surprised that (now former) Lib Dem baroness Jenny Tonge is in trouble over her latest comments mde about Israel. She has plenty of form, after all.

A couple of years ago she was sacked by Nick Clegg from the party's front bench after claiming that the Israeli defences forces were engaged in organ harvesting. She had previously expressed her sympathy with suicide bombers. Or there were her 2006 comments about the Israel lobby having "got its grips on the western world, its financial grips," which sounded to some like the language of an anti-semitic conspiracy theorist.

Tonge has lived in Iran, and she is one of the useful idiots - others include George Galloway and Yvonne Ridley - regularly used by the Tehran regime to peddle propaganda to naive Western audiences.

Tonge was speaking last week at what the Guardian coyly describes as "a meeting at Middlesex university." The topic under discussion was "Is Israel an Apartheid State?" and, according to one report, it developed into "an evening of unadulterated Jew hatred." One of those on the panel with the baroness is a known conspiracy theorist who believes that 9/11 was perpetrated by Mossad. The words from Tonge that embarrassed Nick Clegg included the following:

Beware Israel. Israel is not going to be there for ever in its present form. One day, the United States of America will get sick of giving £70bn a year to Israel to support what I call America's aircraft carrier in the Middle East – that is Israel. One day, the American people are going to say to the Israel lobby in the USA: enough is enough.

Her language is certainly inflammatory (Achtung Juden!), especially the part about Israel "reaping what they have sown". It appears to threaten, and indeed to look forward to, Israel's destruction. ("In its present form" is code for "as a majority Jewish state".) It's the type of statement we're used to hearing from the likes of Mahmoud Ahmadinejad. Leave that aside, though, forget for a moment the nature of the event, ignore the fact that what she almost certainly meant is that she wants to see the end of Israel ... is Tonge's prediction plausible?

I'd say that it is. For one thing, American sponsorship of Israel, on which the country's security ultimately depends, is contingent on the US continuing to play the global role that it currently does. Whatever the power of the Israel lobby, US policy is in the end determined by its strategic interests and, indeed, by its capacity. Presidents both Republican and Democrat have been looking to settle the Israel-Palestine question for decades now, and relations with Israel have been increasingly strained. Especially under Obama.

And I seriously doubt that Israel's enemies would be permanently satisfied with a two-state "solution". Even were Israel to tear down every one of its West Bank settlements. The ultimate aim of Palestinian campaigners and their supporters in the region has always been the destruction of Israel, which they see (in a sense rightly) as an alien imposition planted in the region by Western powers, partly in response to the catastrophe of the Holocaust. Hatred of Israel runs deep in the Arab world, even among moderates and liberals. The Arab Spring has not so far unleashed that genie with full power, but many in Israel have greeted the revolutions, especially the toppling of Mubarak in Egypt and the Islamist election victory that followed, with considerable alarm.

Looking forward a few decades, demographic changes may one day make Jewish Israelis a minority in their own country. Israel is, for all its fearsome defences, perilously positioned and innately vulnerable. It remains an outpost of the West, an historical anomaly, in many ways an extraordinary achievement but ones whose long-term future is far from certain. The siege mentality that has long characterised Israeli politicians and public alike is no accident, and the pervasive, paranoid and often brutal security apparatus that Israel's haters (like Jenny Tonge) revile is a consequence of the fact that the country is surrounded by murderously-intentioned enemies.

Like Spartans surrounded by Helots, the Israelis can never relax. They must remain armed to the teeth in order to survive. They know (and their enemies know) that any sign of weakness could be fatal. And as a consequence they continue to react to provocation with excessive force; and they continue to lose friends in the wider world. It's a no-win situation, which I why I think that ultimately they will lose.

Will Hamas tear up its founding charter and proclaim its belief in Israel's right to exist? It doesn't seem remotely likely. Will Iran remove its support from Israel's would-be destroyers, will the new Egyptian democracy transform itself spontaneously into a nation of Israel-lovers? Will the Saudis and other ruling elites surrender the excuse that the existence of Israel has always given them to divert the attention of their subjects to the corruption and abuses of their own regimes? Hardly. It has suited the rulers of the Arab states and Iran to keep the Palestinian pot simmering over for decades, condemning a displaced people to misery to justify their eternal resentment of the existence of Israel. Too much time has past and hearts have become too hardened for that to change now.

The Christian Kingdom of Jerusalem lasted for less than a hundred years from the victory of the First Crusade in 1099 to Saladin's recapture of the city in 1187. There's no iron law that says that the modern State of Israel will be any more permanent.
Email Post
Labels: Lib Dems middle east Politics