Prince Harry goes back to war 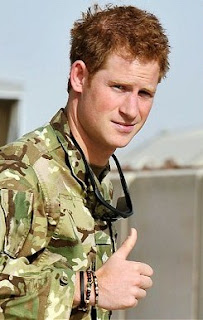 Prince Harry has returned to Afghanistan, which is obviously great news for him, PR-wise. Unlike last time, when he deployment was seen as such a security risk that the entire UK media acquiesced in a news blackout, this time, we learn, the Palace sent out a team from the PA to provide pictures of Harry giving a thumbs-up sign and carefully-chosen quotes while MoD sources went into considerable detail about what his job will be.

His job will be to sit in a helicopter shooting at suspected Taliban fighters. As the Telegraph says baldly, "his role will be to kill insurgents as he operates the aircraft's weapon systems, which include Hellfire missiles and a 30mm chain gun." This, of course, makes a nice change from his recent trip to Las Vegas, where his role was to drink a lot of beer and get naked in the company of attractive young women (although one who claimed to have stayed behind for private snogging session later turned out to be 40 and wanted for fraud).

Last time, he was fighting on the ground. Officially, it's said that he's less of a target in a helicopter, which is why it's now safe to risk publicising his presence in the country. I note that they're not saying he's safer now because the situation in Afghanistan, after eleven years of Western led peace-keeping and nation-building, is safer. It manifestly isn't, although the danger to ISAF troops these days comes less from crude roadside bombs than from rogue Afghan soldiers and police, who must even now be working out how they can get to meet Prince Harry.

Far from disguising the lethal nature of his job in Afghanistan, the prince's handlers seem to be revelling in it - and in Harry's enthusiasm for combat. As the puff-piece in the Telegraph tells us, Harry "graduated from his training course as Top Gun among more than 20 other co-pilot gunners in his class, will be part of the unit with the greatest kill rate of any in Afghanistan, currently averaging around two Taliban killed every week." (Presumably he's a better shot with a 30mm chain gun than he is with a pool cue.) His spokesman assured reporters that killing people was "not an issue at all" for the prince, since "he's a soldier" and that's what soldiers do. Which is obviously the case, though the MoD has tended in past briefings about Afghanistan to concentrate on the supposedly humanitarian, nation-building aspects of the deployment.

During his last tour of duty in Helmand province, almost five years ago, press silence was bought in exchange for promises of extensive film-footage and interviews with the young prince. The tales of royal derring-do that emerged when the embargo was finally broken (by the Drudge Report) doubled up as unquestioning puff-pieces for the MoD and for the Afghanistan mission. There was even a tear-jerking interview in which Harry speculated that his mother, a noted campaigner against all forms of military action in her later years, would be proudly looking down from heaven, "having a giggle" as he occasionally took a wrong turning in the desert. Aaaah.

The footage did wonders for Prince Harry's own reputation, of course. Then, as now, the prince had an image as an inveterate party animal to live down, but unlike today there was precious little else for the public to go on beyond tales of teenage drug-taking and a picture taken at a fancy dress party of Harry with a Nazi armband. Less attention was paid to the PR boost Harry gave to the Afghan war itself, which then as now was going nowhere and to which there was as yet no end in sight.

Film of the fighting prince was presented like something out of an Army recruitment video, with Harry in the role of all-action hero but also down-to-earth, ordinary Joe. "This is about as normal as it gets," he was heard to say, in between shots of His Royal Highness blasting away at "Terry Taliban" and calling down airstrikes. Completely lacking was any sense of context, any analysis of what the campaign in Helmand was designed to achieve and whether it was doing so. It was war as entertainment.

This was no coincidence. In media terms, royals are not hard news. Their role is that of decorative space-filler. Even when the coverage is critical, as it often is, it is rarely serious: the public is supposed to gawp at their clothes, titter at their jokes (or, in Prince Philip's case, gaffes), need to hear details about their medical conditions, indulge their eccentricities (such as Prince Charles's enthusiasm for homeopathy) and feel some vague swell of patriotic pride at the fact that they even exist. With very few exceptions, royal stories are ultimately trivial. So when a member of the royal family gets involved in something that is serious, such as a war, the royal personage may gain an ounce or two of gravitas but the main consequence is that the serious news sinks to the level of trivia.

So don't expect this deployment to lead to much discussion of how things are going in Afghanistan, a subject no-one really wants to talk about. Obama in yesterday's speech to the Democratic convention at gave the Afghanistan mission the briefest of mentions, promising that it would be over by 2014 (that's two more years!). Mitt Romney didn't mention it at all. But then what is there to say? That the Taliban are probably stronger now than at any time since the US troops led by John Simpson kicked them out of Kabul a few weeks after 9/11? That the country remains mired in poverty, backwardness and lawlessness, a place where people can be beheaded for dancing at a wedding? That last week a senior US commander suspended the training of new Afghan Local Police recruits for at least a month because so many of them had links to the "insurgency"?

Best stick to a good news story about a prince using his kit rather than getting it off. That's all this war is really good for.