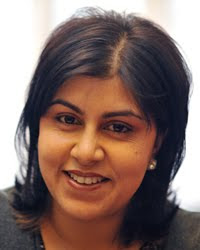 Time will tell if Baroness Sayeeda Warsi's new job as minister for "faith and communities" is anything more than a sop to compensate her for losing her role as Conservative Party chairman. She will be somewhat oddly situated in the Foreign Office, rather than in the Department for Communities and Local Government, which may limit the potential for damage somewhat. The DCLG is already run by the volubly pro-faith Eric Pickles, so we should perhaps be grateful that the two won't be working in the same office to advance the faith agenda.

The title is one that Warsi might have devised for herself. Perhaps she did. While nominally in charge of the Tory party, with a brief to make it more attractive to women and ethnic minorities without alienating more traditional supporters (she seems to have succeeded at neither) she has carved out a niche for herself as a campaigner for the importance of "faith" in society and for the voice of "faith" to be heard in government. More particularly, and worryingly, she became a leading voice against secularism.

She has repeatedly denounced what she sees as the marginalisation of religion in society. In a speech to Anglican bishops two years ago she accused the last Labour government, which many of us thought was rather too keen on opening new "faith schools" and paying heed to self-appointed religious "community leaders", of having been "too suspicious of faith's potential for contributing to society". The Coalition would "do God", she promised.

In a later speech, she complained about "the rise of unreasonable, unfounded, irrational bigotry," by which she meant not religious fundamentalism (which might, indeed, have been something worth complaining about) but rather the negative way that religion was portrayed in the media. Then earlier this year, on the eve of a visit to the Pope at the head of a government delegation, she became almost hysterical in her denunciation of "this militant secularisation is that at its core and in its instincts it is deeply intolerant" and which "demonstrates similar traits to totalitarian regimes."

In the same article, she proclaimed that "faith has a vital and important role to play in modern society" and (although a Muslim) called for "Europe to become more confident and more comfortable in its Christianity." She expressed her "fear" that "a militant secularisation is taking hold of our societies", a "rising tide" that had seen religion "sidelined, marginalised and downgraded in the public sphere." This, of course, is the same case that is made by campaigners who claim to see evidence of discrimination against Christians, and who by coincidence are arguing four cases at the European Court of Human Rights today, including that of Lillian Ladele, the registrar who refused to officiate at civil partnership ceremonies .

There's irony in the fact that the defendant in the claims, technically at least, is a British government publicly committed to ending the "marginalisation" of Christianity in society. But it's probably lost on the likes of George Carey, who thinks that the complaints are victims of "new heresy trials". The former Archbishop of Canterbury writes today in the Mail that David Cameron "has turned the value of ‘tolerance’ on its head" and that under this government, like its predecessor, "the secular equivalent of the Inquisition will brook no dissent from the reigning orthodoxy of diversity and equality."

I find it quite hard to square such suggestions with a government committed to an expansion of state schools, one that even under the now abandoned proposals to reform the House of Lords wanted to maintain reserved seats for Church of England bishops, one that now boasts a minister with special responsibility for "faith and communities."

Up to now, Warsi's interventions have been largely extra-curricular affairs, in the nature of personal ruminations. In future, she will be speaking within the parameters of her job description. Giving her the title of minister for "faith and communities" is, at the very least, an endorsement of her previous comments and in invitation to carry on speaking in the same vein. While it's not clear what direct influence this will give her over government policy, or how, the mere fact of there being a minister with a "faith" brief is likely to increase the profile of religion in government, and raise the expectations of faith leaders of all kinds.

One of the main dangers of the new appointment is that it may further institutionalise the notion of a "faith community" as a demographic grouping defined by reference to religious belief. The concept is inherently problematic. It assumes that people have common interests because they share a religious label: indeed, it encourages groups to adopt a religious identity for political rather than spiritual reasons, and that is bad both for politics and for religion. And it potentially privileges people who assert a religious identity over those who don't. There's not going to be a minister for secularism.

Any "faith community" will be highly diverse: not just religiously (fundamentalists and liberals, observant and less observant) but also socially and politically. The very idea of a "faith community" is necessarily distorting. A Muslim billionaire and a Muslim welfare claimant may have absolutely nothing in common except their religion, which they may practise in very different ways. To speak of a "Muslim community" masks such distinctions. It also gives power or at least influence to religious leaders, whose grounding is in religion rather than in social or political affairs, and whose priorities are (by the fact that they are religious leaders) distinctively their own.

Or take Christianity. Does Cardinal Keith O'Brien, for whom same sex marriage is a human rights abuse on a par with slavery, speak for most Scottish Catholics, whose "faith leader" he nominally is? What is "the Christian community"? To judge by the press coverage, it consists mainly of people like George Carey, the Christian Institute and evangelical hotel proprietors who want to exclude gay couples from their premises. It's not so much a community as a collection of special pleaders who seem to be principally obsessed with sex.

And now they have their own minister. Great.
Email Post
Labels: Con/Lib coalition Politics religion