Tom Holland: In the shadow of a sword? 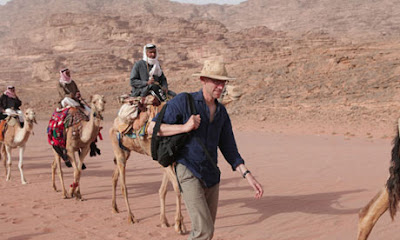 Channel 4 said today that it had cancelled a special screening planned for this Thursday of Islam: the Untold Story, its documentary of last month written and presented by Tom Holland and based on his latest book In The Shadow of the Sword.

The whole thing is slightly mysterious, the station saying merely that the event was cancelled on "security advice". There are suggestions that Tom Holland was threatened. He was certainly the target of much abuse on Twitter in the days following the programme's broadcast. But the screening itself, which was to have been presented by Cathy Newman and featured a Q and A with the author, was a small-scale event for journalists and interested parties (including representatives of Muslim groups) and may have been intended partly as an opportunity for Holland and the programme-makers to dispel any misconceptions. It was not well-publicised; I was only aware that it was taking place because the people at Channel 4 had been kind enough to invite me along.

Whatever prompted it, the cancellation has surely caused a much bigger stir than the event itself would have done had it gone ahead. It will no doubt fortify the bullies and threat-makers in their conviction that they are able (and entitled) to intimidate anyone who questions their religious dogmas. And it may make it harder for other writers and film-makers to broach even mildly controversial subject-matter about Islamic history in future, to the intellectual detriment of Muslims and non-Muslims alike.

The last time I wrote about Tom Holland's researches into the obscure origins of Islam I said - and hoped - that suggestions that he was brave even to broach the subject were unhelpful, alarmist, even (in the literal meaning of the word) Islamophobic and, worst of all, risked becoming a self-fulfilling prophecy. If you put it about, after all, that a book or film is "offensive" about or even critical of Islam, you are practically inviting the crazies to come out with death threats. Then there is the self-censorship that comes either from fear or from a misplaced desire to show "respect" and that results in important debates not being had, voices (both internal and external to Islam) being silenced and widely-held prejudices being reaffirmed about Islam being a uniquely intolerant religion whose followers exist in a state of constant irascibility, ever on the lookout for a new infidel or apostate on whom to rain curses and death-threats.

For a while it looked as though Tom would get away with suggesting that the traditional story of Mohammed and the birth of Islam is supported by no historical evidence and might, indeed, conceal a more complex sequence of events. Criticism of the book by Muslim intellectuals, while trenchant and in some cases savage (Ziahuddin Sardar in the New Statesman was especially uncharitable) at least seemed to acknowledge that rational debate, rather than the issuing of fatwas or the carrying-out of mob "justice", was the proper response.

The commonest charge against Holland from Muslim critics was not blasphemy but "orientalism" - the idea, popularised by the late Edward Said, that any discussion by Western academics of Islamic history or culture is by its very nature presumptuous and imperialist. In other words, the criticism was political. While accusations of orientalism are, in some ways, only a more sophisticated version of the "How dare you!" favoured by angry mobs stirred by religious passions and feelings of offence, and the attempt to close down debate scarcely more disguised (or less pernicious), they do not amount to a security risk.

Holland himself has been almost painfully concerned to stress his respectful attitude and good intentions. He has agonised in public, though robustly defending his conclusions, and on Twitter has politely, and repeatedly, responded to many of his critics. This is no surprise: he is surely one of the nicest people on Twitter. But it does make the torrent of abuse that has greeted Islam: The Untold Story all the more depressing. Unlike the book, the film concentrated on the origins of Islam. It also featured interviews with controversial scholars, notably Princeton's Patricia Crone, whose work Holland drew on in reaching his apparently radical conclusions. But it was far from bombastic. Holland is no David Starkey (Starkey on Islam - there's a suggestion for Channel 4 commissioners if you think you're hard enough).

Nevertheless, it drew well over a thousand complaints (no doubt some of them were "organised") and a strongly-worded press-release from the Ramadhan Foundation, a group that presents itself as a moderate voice for Muslim youth in Britain and claims "to promote tolerance and peaceful co-existence." Mohammed Shafiq, the organisation's chief executive, claimed that the film "makes a mockery of impartial and objective broadcasting" and "broadcast lies." He called on Channel 4 to withdraw the documentary and apologise. The statement included a paragraph that read disturbingly like a threat:

There is a desire amongst some people trying to change or discredit Islam whether its politicians, commentators or broadcasters like Channel 4. The British Muslim community will not allow Channel 4 to distort our faith and our history.

Such reactions (or that of the Muslim Council of Britain, which called Holland "a pop historian" who had a "total lack of understanding of both Islam and its Prophet") oddly combine dismissiveness with fear, as though the programme's assertions were at one and the same time obviously untrue - indeed ridiculous - yet likely to be widely believed by an ignorant and easily-led public. I find this a bit odd.

If Tom Holland is wrong, believing Muslims have nothing to fear from him. Actually, they have nothing to fear in any event, since his whole argument rests on the idea that the traditional accounts of Mohammed's life are not reliable as historical sources, dating as they do (at least in written form) to many years after the prophet's death. To say that is not to prove that they are inaccurate, merely to show that they might be inaccurate and that the creation and rapid spread of Islam might be explained in other ways. This sort of revisionist history is unlikely to be of any interest to committed believers except for use as target-practice.

The idea that the accepted story of Mohammed's career or even Islam itself will be destroyed because Tom Holland has written a book pointing out omissions in the historical record is, apart from anything else, inherently ludicrous. Christianity, after all, has quite happily coped with two centuries or more of critical scholars poring over the Gospels and finding them inadequate as historical documents. Scarcely an Easter goes by without some new revisionist TV documentary suggesting that Jesus never existed, or went to live in India, or that the Gospels were pieced together from bits of the Old Testament and bear little-or-not relation to reality. One of the most popular novels of recent years (the most popular, until 50 Shades of Grey came along) was based on the premise (not altogether ridiculous in itself) that Jesus married Mary Magdalene. Such speculations pose surprisingly little threat to the accepted Christian story, which for most people still starts in a stable at Bethlehem.

There may be no external proof that Mohammed ever lived in Mecca, or emigrated to Medina, or for any of the events of his life recorded in the Hadith and resolutely believed in by devout Muslims. But they are internally consistent, and supply a context for the Koran which would otherwise be lacking. That is enough; if not enough for historians then enough for believers. Holland's critics complain that his film "lacks balance", by which they mean that not enough time was devoted to interviews with Muslim scholars offering a more orthodox view. But that is to misunderstand the whole point of the film, which was to offer an alternative perspective. The traditional narrative - of the Meccan camel-trader turned prophet turned lawgiver turned military leader, who united the tribes of Arabia with a message that seemed to have come from thin air - is, even in the west, incredibly (and increasingly) familiar. The BBC gave it a whole three-part series last year, presented by Rageh Omaar and containing very little in the way of sceptical "balance".

In terms of the presentation of Mohammed and of Islamic history in the British media as a whole, representatives of the "Muslim community" have very little to complain about.