Hubris and a Woman Scorn'd: Narrative cliché in the sentencing remarks of Mr Justice Sweeney

The normally level-headed Charles Crawford was sent into raptures by the performance of Mr Justice Sweeney as he sent Chris Huhne and Vicky (aka Vasiliki) Pryce down for eight months yesterday.  "When a British judge is on top form," he writes, "the result is peerless: clarity, precision, nuance and above all a strong sense that, yes, a good and fair decision has been reached."

Hmm.  What I saw is a judge indulging himself, as sentencing judges often seem to, in a crowd-pleasing display of moralistic finger-wagging that ultimately had little to do with the facts of the case before him.  Whether or not the eight month sentences were justified as a deterrent (and to what? Not keeping shtum about a crime you committed years ago?) or as proper punishment for the acts committed is another matter.  Had he confined himself to the offences and the appropriate penalty that they attracted, he would have completely discharged his obligations to the public interest.

He seemed to sense, though, that more was expected of him.

To the media, the Huhne/Pryce case has only ever been tangentially concerned with the crime of perverting the course of justice by exchanging speeding points with a spouse.  Rather, it is somewhere between a soap opera and a Greek tragedy.  Chris Huhne, a high-flyer brought low by his own arrogance and sense of invulnerability, his stellar political career wrecked not so much because of his manipulation of the criminal justice system but because of the way he left his wife.  Vicky Pryce, herself a high-flying economist but now reduced to living out a misogynistic cliché: a modern-day Medea, deranged by jealousy and deformed by hate, wreaking her hysterical revenge on the man who rejected her; or else a cool, cynical manipulator, plotting with her neighbour Constance Briscoe, a publicity-hungry barrister and part-time judge, to bring her ex-husband down while escaping the consequences of her own actions. 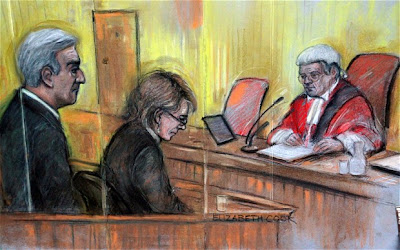 All journalists like a neat narrative hook, of course. They're in the business of telling stories, and stories are easier to tell when they fit (or, more often, can be fitted) into a pre-established narrative framework.  The wronged wife is such a stock character in fiction, and Vicky Pryce's ultimately self-destructive behaviour fits so comfortably into the time-honoured pattern, that it would be expecting too much for the media not to latch onto it.  Especially as it takes attention away from the role of the newspapers themselves in the downfall of both partners, above all the inducements and implicit guarantees offered Pryce by Isabel Oakeshott of the Sunday Times under the guise of friendship, followed by a failure of both Oakeshott and her editors to go to the wire to uphold the once-sacred principle of journalistic confidentiality.


(Although a narrative template can be fitted to that, too: witness Sarah Ditum, who eschews any discussion of journalistic ethics by painting the Pryce/Oakeshott relationship as a "horrible parody" of female friendship.)

But however tempting it is for the media to frame the Pryce/Huhne implosion as a modern morality tale, as the two protagonists act out their hoary roles of fallen hero and vengeful wife, we should expect better of a high court judge.  Yet Sweeney J was only to eager, it appears, to lard his judgment with the same narrative clichés and trite amateur psychology.

For him, the fate of Huhne touched on the tragic.  The former Cabinet minister had "fallen from a great height", his ambition (originally, concern about possibly losing the Lib Dem nomination for Eastleigh) leading him to embark on the course of criminality and lying that ultimately ended in the dock.  The judge expressed no sympathy for Huhne, indeed asserted that "to some extent" he was the more culpable of the two (they were his speeding points, after all).  Nor did he seem very convinced by Huhne's expressions of remorse ("It's easy now to apologise").  Nevertheless it's possible to detect in the tenor of his remarks a certain sadness at the predicament in which Huhne now finds himself.  Indeed, he gives Huhne a 10% discount for pleading guilty, even while detailing the lengthy and mendacious attempts he made right up to the day of the trial to frustrate justice, by lying to the police and then trying to have the case struck out, attempts that "will not add a day to your sentence."

The relish with which the judge lays into Vicky Pryce, by contrast, is evident in every twist of his rhetorical knife.  Her behaviour, he has "no doubt", demonstrates a "controlling, manipulative and devious side to your nature."  Having decided that she is motivated ("I have no doubt") by "an implacable desire to revenge", he admits that the circumstances under which Huhne dumped her must have been "horrendous" but is nevertheless unmoved.  Pryce had "little consideration for the position of your wider family", he tuts (meaning, I suppose, that she was a bad mother, who let her vindictive desire to get one over on her ex override her duty as a woman to keep up a dignified façade for the sake of the children).

Armed with this interpretive framework, Sweeney then relates Pryce's dealings with the press in a manner that makes no allowance for the subtlety of her relationship with Isabel Oakeshott.  While Pryce did indeed make the first move, Oakeshott's dogged pursuit of a story, her willingness to flatter and cajole a sometimes reluctant source are all too obvious from the leaked emails between them.  As Janice Turner put it in Saturday's Times, "from the needy tone of her emails... it seems Pryce sought solace besides revenge.  So much so that she didn't notice this consummate journalist expertly reeling her story in."  Turner, though detecting "little sexual jealousy" (but much jealousy of Huhne's political career) thinks that Pryce lost both her cool and her common sense.  Had she displayed more "propriety and grace", her warmth and expertise on the Greek economic problems would have seen her star rise as Huhne's set.

Well, maybe.  Sweeney J, though, has Pryce down as a cold and devious manipulator, which makes the press the victim as well as the instrument of her calculating manipulations.  Pity the poor journalists who became the puppets in Pryce's theatre of revenge:


Your weapon of choice was the revelation of his part in the offence in 2003. But it was a dangerous weapon because it had, in truth, been a joint offence. Thus you did not go to the police, because (as you admitted during your second trial) you appreciated the risk that you would both be prosecuted. Instead you went first to The Mail on Sunday then, when they didn’t publish, to the Sunday Times and then, after they published, back to The Mail on Sunday. Hence it was that over the period of six months from November 2010 to May 2011 you, I have no doubt, sought to manipulate and control the Press so as to achieve that dual objective, hoping all the while to be able to hide behind their duty of source confidentiality, which you tried long and hard to do, as well as laying the ground, if that failed, for a false defence of marital coercion.

It's hard to square this simplistic notion of newspapers lamely doing Pryce's bidding with the language used by Oakeshott in her emails, which seems more calculated, devious and manipulating than anything attempted by Pryce (eg: "It's an entertaining thought, cornering him at a press conference - his expression would be a picture.")

Sweeney then goes on to attribute Pryce's attempt to use a defence of marital coercion as part of the same "controlling, manipulative and devious" character.  Her original act of taking the points on her husband's behalf is impelled by nothing more than "shared ambition" (as if a woman of Pryce's professional standing, a senior economist who before Huhne became an MP was arguably in a more prominent public position than he was, cared only for her husband's career) and because she would find it inconvenient were he unable to use the car to ferry the children around.

It doesn't occur to the judge that, even without coercion, there are subtle pressures at work in a marriage, which while not excusing the crime perhaps render it less morally damning: the loyalty that exists between spouses, a sense of mutual obligation, of being a team.  The fear, perhaps, of otherwise feeling guilty at having let her husband down, of letting him suffer the consequences of her own moral punctiliousness; the fear of the look in reproach in his eyes, of what would be the long-term effect on their relationship if she refused to back him up.  She was doing him a favour, it should be remembered: lying to the authorities, committing a crime, at some considerable risk to herself.

Even Sweeney accepts that swapping the points was almost certainly Huhne's idea.  It would have been quite open to him to deplore her action in placing marital loyalty (or even harmony) ahead of honesty and obedience to the law, to say something along the lines of "It is no excuse that you acted out of misplaced love and a sense of obligation to your husband."  But such a conclusion would fit ill with his favoured interpretation of Pryce as a cold, calculating and manipulative woman: she couldn't possibly, on this view, have ever helped Huhne for his sake; she must have had selfish and devious reasons of her own, like not wanting to have to drive the kids to school.

Constructing a pat little narrative that draws on age-old misogynist stereotypes but which is pitched perfectly to appeal to modern newspaper readers (at least as journalists imagine their readers to be) does nothing to advance justice or understanding.  It's a judge's job to pass sentence, not to carry out gratuitous acts of character assassination based on little more psychological insight than a daytime talk-show of the Jerry Springer or Jeremy Kyle variety.

Huhne and Pryce were only in court, of course, because of Pryce's desire to hurt her ex-husband and her resentment at his treatment of her led to an old offence being brought to light.  The judge notes this in passing, and somewhat strangely: "To the extent that anything good has come out of this whole process, it is that now, finally, you have both been brought to justice for your joint offence."  The phraseology implies that the conviction and jailing of Huhne and Pryce is merely a minor, if benign, side-effect of the disastrous train of events that has destroyed the careers of both of them.  That certainly reflects the story as told by the press, and perhaps as experienced by the ex couple themselves.  Legally, though, the exposure of the crime is the only thing that really matters: the collapse of the Huhne marriage was merely the mechanism that brought the crime to light.  If there's little sense of that in Justice Sweeney's remarks it's probably because, like almost everyone else who isn't Chris Huhne or Vicky Pryce, this has been less a trial than a narrative event.
Email Post
Labels: Crime gender politics law Lib Dems Politics Society