Melvyn Bragg on Mary Mag: A cause for Concern 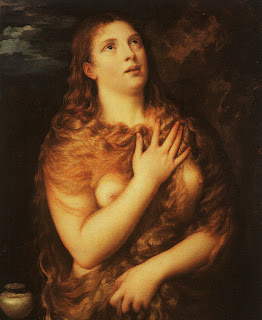 The BBC is showing a documentary about Mary Magdalene tomorrow lunchtime. Typical, pious, Good Friday viewing, reminding the public that Easter isn't all chocolate and bunnies but (for Christians at least) has something to do with Jesus, you might think. It's presented by Melvyn Bragg, for one thing, which is British broadcasting's ultimate stamp of intellectual seriousness. Better than Botney, even. But the loopy evangelical pressure group Christian Concern are aghast. In an "action alert" email tonight, they urge supporters to complain to the BBC about this forthcoming outrage, the timing of which they suggest is "highly inappropriate and inflammatory."

"The BBC's online complaint form only takes a few minutes to complete," they remind people. "The BBC's response will depend on what level of feedback it receives."

Because the Beeb is entirely unfamiliar with the concept of an organised write-in campaign.

"Inappropriate timing" is hard to sustain. The Gospels state that Mary Magdalene stood at the foot of the cross while Jesus was being crucified, and that she was the first person to see (or imagine she saw) the risen Christ. And those are the only definite references to her in the New Testament. So it's hard to see what would be a more appropriate time to celebrate her.

So what's so outrageous about it?

Christian Concern are disturbed by a Telegraph piece in which Milord Bragg discusses the "tantalising and elusive" evidence about Mary M, and the "fragments which increasingly hint at radical new truths about the woman who has been called the apostle to the apostles."

This is certainly over-egging the pudding. The "radical new truths" have been around for donkeys' years: a few passages in apocryphal gospels that hint at a unique closeness in the relationship between Mary and Jesus. Yes, all that Holy Blood, Holy Grail/ Dan Brown stuff that has been the stuff of speculative history and conspiracy theorising since I was a lad and probably long before. There is, Bragg offers, "one taunting scrap of record which may well lead to the conclusion that she was his wife."

Well, knock me down with an archangel's feather.

If there's anything to be aghast about, it's the fact that this utterly familiar idea, for which there is, of course, no definitive proof (nor will there ever be) is still being presented in TV documentaries and newspaper articles as new and shocking. Given that half the population of the planet seems to have read Dan Brown's poorly-written thriller, that ought to be a genuine scandal. But, of course, that isn't the scandal that Christian Concern is concerned about.

Their concerns are as follows:

1) In a broadcast at the precise time Christians are remembering his death on the cross, this programme questions the purity of Jesus.

The programme suggests that Jesus might, just possibly, have been married. To a woman. How does this "question his purity", exactly. I thought that Christian Concern approved of heterosexual marriage. Barely a day goes by without Christian Concern voicing their supposedly Christian concern about the "threat" to traditional marriage posed by the government's proposal to extend it to gay couples. Only this Tuesday they sent out a "prayer alert" urging people to pray that the US Supreme Court uphold California's ban on same-sex marriage "and that God's good pattern for marriage and family is not further corrupted."

Yet somehow God's good pattern is not good enough for the Son of God, that if Jesus had married it would have exposed him to "impurity". As Cranmer Tweeted to me earlier this evening, one might expect Roman Catholics, with their ideal of the celibate priesthood, to reason thus (though celibate Catholic bishops, like the very pure ex-Cardinal Keith O'Brien, have put themselves at the forefront of the campaign for traditional marriage). But Christian Concern is a largely Protestant outfits, and Protestants have never thought that marriage might be somehow "impure".

It's an odd objection.

2) The claims about Jesus are based on dubious scholarship... it feeds on Dan Brown's 'Da Vinci Code' hypothesis rather than taking account of sensible scholarship.

Well, they're on slightly firmer ground with this one, I suppose. The scholarship itself isn't dubious: the apocryphal gospels which imply a wife-like status for the Magdalene do exist, and to regard the statement that "he often kissed her on the [mouth]" as suggesting physical as well as spiritual intimacy is not wholly implausible. What is dubious is the notion, which no serious scholar makes, that these texts are historically reliable. But to say that is not to say definitively that Jesus was not married.

What we can say is that the mainstream Christian tradition has always assumed Jesus to have been celibate; but that there were, in the first few centuries AD, contrary ideas floating about. The Gnostic and other apocryphal gospels record some of these ideas. So while there is no real evidence that Jesus was married, there's also no direct statement in the canonical gospels that he wasn't.

How does this matter? What Christian Concern and their ilk can't abide is that, for many people, Jesus is a fascinating historical (or quasi-historical) figure about whom little is known but about whom many would like to know more. I suspect that very few people would be scandalised if proof emerged that there was a Mrs Christ. Most of us would be quite pleased, I would guess, because most of us (even including Richard Dawkins) feel quite warmly about the Jesus depicted in the gospels, and wouldn't begrudge him a little connubial happiness. The theory that Jesus was married keeps getting trotted out, in other words, not because it's scandalous but because, credible or not, it has popular resonance. It's also plausible that a church that acknowledged Jesus as married, or even gave equal prominence to his female disciples (a role which Mary Magdalene, as depicted in the New Testament, undoubtedly fulfilled) might have had fewer problems down the centuries with sexuality and the role of women.

3) It makes indefensible claims about the nature of the Bible (e.g. the process by which the books of the Bible came to be recognised and collated)


The Gnostic Gospels which were rejected by those who put together the authorised versions include the Gospel of Mary, found in Cairo in 1896 and widely argued to depict the character of Mary Magdalene, and, as important for her story, the Gospel of Philip – which was among the texts found by an Arab shepherd in the desert in 1945. These, like others, were excluded from the final political version of the Bible. When you read them you can understand why. Philip tells us that Christ “loved her” more than all the other disciples. In Mary’s Gospel she speaks of close and long dialogues with Christ himself. But the forces of men, later abetted by the forces of the manly state of Rome, and the masculine structure of the hierarchy of the Catholic Church, were going to bring her down.

If all Christian Concern are saying is that the compilation of the canon of scripture was more than just a patriarchal plot to exclude female voices (even if that was the effect) they may have a point. But Christian Concern's idea of a "defensible" claim about the Bible is that it is the revealed Word of God, literally true in every particular, that may as well have floated down on a cloud, leather bound and written in Jacobean English. Compared with the view of scriptural fundamentalists, Bragg's "political" interpretation, simplistic caricature as it is, is rather closer to what modern scholarship has discovered.

I would however urge my few remaining readers (sorry about the patchy service of late) to bear in mind Christian Concern's valid points: that the BBC complaint form doesn't take long to fill out, and that "the BBC's response will depend on what level of feedback it receives."
Email Post
Labels: BBC Christianity conspiracy theory history religion