Much talk today about the so-called "UK Peace Index", a piece of research put about by something called "Vision of Humanity".  It shows that Britain has become "11% more peaceful" over the past decade.  In particular, there have been dramatic falls in the rate of recorded crime, especially dramatic crime - since the middle of the last decade.  The trend is a global one - at the very least, it is mirrored in other Western countries - but the fall in crime in the UK is particularly marked.

The reports led to much head-scratching among the constitutionally pessimistic media, who rely on everything becoming progressively worse.  "Despite the fall in violent crime across the country, the public tends to perceive that Britain is much more violent than it is in reality," reports the Daily Mail, with a completely straight face.  Why might the British public have an exaggerated fear of crime, I wonder?

Still, there was a crumb of comfort for the Mail, which was able to report "wide variations between dangerous inner-city areas and far more quiet rural regions" (and to dub Lewisham the violent crime capital of England).  But highlighting these unsurprising statistics misses the point that crime has fallen everywhere, even in Lewisham, which was always going to be more violent than the sleepy Norfolk village identified as the most "peaceful" part of the country.  Midsummer Murders is supposed to be fiction, after all.

So yes, crime has fallen.  But why? When crime was rising in the 1980s, it was fashionable to blame Thatcherism, de-industrialisation, unemployment, rising inequality and other economic causes, but as the tooth-sucking Mark Easton was forced to admit, crime has continued its recent downward path despite the economic woes of the last few years and despite the fact that inequality continues to increase.  Easton however has found another convenient Lefty comfort-blanket:


Could it be that global communication, particularly the internet, is having a civilising and calming effect on people's behaviour? We live in an age when, for the first time in history, people from all backgrounds can get an understanding of how the rest of the world lives without needing to leave the comfort of their living room.

This mass socialising may be changing attitudes. In the UK there is good evidence that people are becoming more tolerant of difference and less tolerant of violence.

The huge fall in drinking among young people over the past decade, another thing the doom-mongers don't like to talk about, may also be connected with reducing crime-rate; but is it cause or effect, or are they both merely manifestations of an increasingly controlled and conformist society?

More excitingly, perhaps, there's the lead pollution theory put forward by George Monbiot in January.  This is the idea, for which there is surprisingly good evience, that the generation that has grown up since petrol was deleaded is less predisposed to violence than those whose infant brains were subjected to high levels of lead in the environment.


Lead poisoning in infancy, even at very low levels, impairs the development of those parts of the brain (the anterior cingulate cortex and prefrontal cortex) that regulate behaviour and mood. The effect is stronger in boys than in girls. Lead poisoning is associated with attention deficit disorder, impulsiveness, aggression and, according to one paper, psychopathy. Lead is so toxic that it is unsafe at any level.

Who knows, such a theory might help explain the hyper-violence of the Roman Empire, whose population drank water conveyed in leaden pipes.

There's an important caveat, though, which has scarcely been noticed in the coverage of the Peace Index.  A trend is not the same as absolute numbers, as this graph (provided by the researchers) shows quite dramatically: 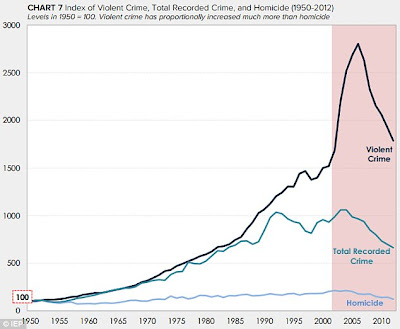 While the graph does show big falls in recent years both in recorded crime as a whole and, most dramatically, in violent crime, these falls come at the end of a decades-long increase in both.  The trend since 1950 (admittedly, a historically low base) was consistently upwards in overall crime and, even more, in violent crime until the end of the last century.  It rose in good times and bad; during the buttoned-up, militarised Fifties and the Flower Power Sixties, under Labour governments and Conservative ones.  The overall crime rate took off in the Seventies and then accelerated further in the Eighties, reaching a peak ten times the 1950 figure about twenty years ago.  It fell off a bit under John Major and before rising under Tony Blair to its previous peak; but then it began falling again, and has fallen consistently for a whole decade. It's now down to levels last seen in the early Eighties, but is still much higher than it once was.

Violent crime shows a different profile, rising even faster with a sharp spike and peaking in 2005 at a level 28 times the 1950 level.  It has fallen sharply since, but is still above 2000 levels.  It's still around three times as high as in 1980 and sixteen times that in 1950.

Crime, then, is still high, and violent crime is still extremely high.  Despite today's superficially good news, modern Britain is still a crime-ridden, ultra-violent hellhole compared with the paradise that is was the 1950s, when Peter Hitchens was growing up and everything was safe and secure.  Nil desperandum.
Email Post
Labels: Crime economy Politics Society