Thatcherism in theory and practice 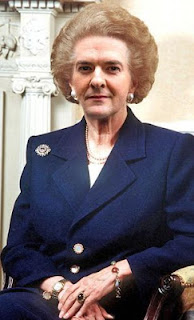 As a postscript to yesterday's offering, here's a telling extract from the article that George Osborne wrote for today's Times:

The word "Thatcherite" has become so overused and misapplied that it bears only a partial resemblance to the programme of government she undertook.  Indeed, the other day before my recent budget I was told by someone that I needed to deliver a real Thatcherite budget, "like 1981" they said, and slash taxes.  I politely pointed out that the famous 1981 budget had actually increased taxes substantially, in a determined attempt to bring the deficit down and lower interest rates -- and that I was trying to do something similar by cutting spending.


Was she ever a Thatcherite at all?  I think there's a useful distinction to be drawn between "Thatcherism", the pragmatic and cautious response to economic and diplomatic affairs that characterised Mrs T's government during at least the majority of her rule, and "neo-Thatcherism", a set of ideological beliefs and somewhat simplistic policy prescriptions based on a somewhat idealised or (as in Osborne's case) barely remembered notion of what she was like.
Email Post
Labels: conservatives economy George Osborne Thatcher