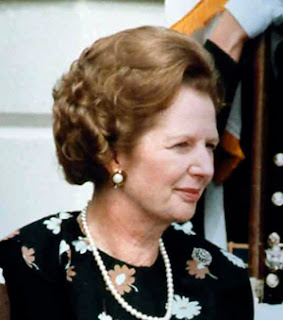 So Maggie is dead. The lady's not for returning. She has gone to the great grocer's shop in the sky, where the books always balance and the supply of jam never runs out. And we who are left on this sublunary orb cannot but be aware of the diminishment. Twitter today has not seen quite the orgy of grave-dancing that many had predicted, but even her harshest critics have had nothing else to talk about since lunchtime, and that is a mark of her historic stature. A giant has departed, the principal figure of a lost heroic epoch: as Boris Johnson put it earlier today, "her memory will live long after the world has forgotten the grey suits of today's politicians." Indeed, it will surely endure even after the world has forgotten Boris.

It's important not to exaggerate. She didn't single-handedly save Britain (had she done so, let's be honest, we wouldn't be in quite the mess we are today); nor did she single-handedly destroy the postwar settlement, a task that has been largely left to her successors, New Labour and Coalition alike. Her premiership answered some questions, but raised others that remain unresolved. She made massive political blunders (such as the poll tax) and her persona was sometimes ridiculous (but then, as Roy Jenkins wrote in his biography of Churchill, great men often have about them "strong elements of comicality"). But her achievements were real and lasting, in the eclipse of undemocratic union power and, abroad, in the defeat of communism. Perhaps her greatest accomplishment, though an accidental one, was that victory in the Falklands destroyed the credibility of military dictatorship not just in Argentina but throughout Latin America. She helped to bring democracy to two continents.

In Britain she failed, in large part because the people were not worthy of her. She wanted to create a property-owning democracy, populated by small business owners and respectable workers with their own homes and share portfolios, in which "society" was not a synonym for the state but rather a network of self-reliant and charitable families supporting themselves and looking out for their neighbours. That's what she meant when she said that there was "no such thing as society". Unfortunately, the people she emancipated sold their shares at the first opportunity and invested the proceeds in drink and cheap holidays; while those who made fortunes under her government too often failed to see any obligation to their fellows. The freedom she offered required a discipline and moral conscientiousness that she herself possessed but that too many, not being of her own wartime generation, lacked. Today's selfish and deracinated society is her legacy but was never her intention.

The Britain which Margaret Thatcher came to lead in 1979 was a vastly different place. In retrospect, the politics of her time seems strident, violent even. The language was polarised and impassioned, the issues at stake starker and more real. This is to some extent an illusion. Politics was not nearly so professionalised then. Her rhetorical style was abrasive even at the time, but less outrageously than it would be today. Politics had not yet become wholly dominated by inoffensive platitudes. Quite the reverse, in fact: Mrs Thatcher often preferred the language of confrontation to its reality, and her policies tended to be less radical than her rhetoric. If a time machine could bring the Thatcher of the mid 80s into the present day, many her policies would be revealed as well to the left, not just of the current coalition government, not just of Tony Blair, but even of Ed Miliband.

Today we appear to be in the midst of an impassioned debate about welfare, but the one thing that all parties agree upon is that benefits are too generous and their claimants largely undeserving. Yet under Thatcherism, sickness benefits were generous and nodded through by family doctors, single parents were allowed to stay at home on Income Support until their children reached 16 (Harriet Harman ended that one), while unemployment benefit was worth 50% more in real terms than it is today. There were often three million unemployed, but this woeful figure didn't lead to their demonisation nor to a Dutch auction among politicians over who would be most punitive. (Norman Tebbit suggested that the unemployed should get on their bikes to look for work, but he neither cut their benefits nor forced them to work for nothing.)

The Thatcher government increased spending on the NHS in real terms every year that she was in power. She herself talked tough on law and order, yet under her the Home Office was a bastion of liberal reform. The prison population was half what it now is (even though crime was higher) and it was her government that introduced the Police and Criminal Evidence Act, which for the first time laid down in a detailed statute the limits of police power. She faced IRA terrorism with fortitude but not with repression. Even after the Brighton bomb almost killed her and her entire Cabinet, the country didn't see the draconian laws that the Blair government introduced after 9/11. The most controversial measure was silly but harmless: a notorious stipulation that Gerry Adams and Martin McGuinness could not be heard on the airwaves but their words must be spoken by actors. Under Blair, they would probably have been in Belmarsh. On social issues she was not instinctively liberal, and many will never forgive her government for Section 28; yet she was one of a minority of Conservatives to vote for the decriminalisation of male homosexuality, and was personally sympathetic and supportive to many gay (but closeted) Tory MPs.

The first major politician to talk up the threat of global warming, Mrs T also did more than any previous British leader (apart from Ted Heath) to promote European integration, passing the Single European Act which opponents at the time feared would mean the end of British independence. Until Nigel Lawson's 1988 budget, the top rate of Income Tax was 60%, which today would seem impossibly high, and it was paid by all higher-rate payers, not just by millionaires. Lawson's tax-cut, moreover, came at a time when public finances were (astonishingly, it now seems) in credit. And even despite it, the total tax take was 2% higher as a percentage of GDP than it had been when she came to power. This was no profligate or ideological small-stater. Her government freed public utilities from sub-Soviet nationalisation and inefficiency, but privatisation was pursued with caution. She once said that some things could in principle never be privatised, and the example she chose was the Royal Mail.

Today President Obama paid tribute to a "true friend" of the United States, which is no more than just. But she was no-one's poodle. She opposed President Reagan's invasion of Grenada, even though he was her greatest foreign friend (would Blair have been so forthright?) and the Iron Lady was the first Western leader to cultivate the friendship of Mikhail Gorbachev; without her influence, Reagan might never have moderated his own implacable opposition to the Evil Empire.

Seventeen years after she left office, people who had looked at her as the embodiment of the Antichrist finally had a taste of power; and, their backs ensconced comfortably on ministerial chairs, began to implement policies of which she would never have dreamt. They ignored Parliamentary conventions and ride roughshod over ancient civil liberties in a manner which would have horrified the Iron Lady. But they faced not even a fraction of the screaming, hysterical opposition Margaret Thatcher had to endure.

That's partly because, being (theoretically) of the Left, they benefited from a halo effect (because they weren't evil Tories). But it's also because, unlike Thatcher, they used emollient language. Speaking in reasonable and moderate tones, they got away with far more than she ever could have done. Cameron learnt the lesson well, so that today, pursuing social policies far more right wing that she ever attempted, he yet retains the image of a moderate Conservative. And in terms of the centre of political gravity, that is indeed what he is. Margaret Thatcher set the country on a rightward course, but it was Tony Blair who made it impossible ever (or at least for the foreseeable future) to change tack.
Email Post
Labels: conservatives Politics Thatcher