Coming out in Barnsley

Sixteen year olds registering at a sixth-form college in Barnsley, fabled home of Ian McMillan and Arthur Scargill, were told to fill out a form giving their details to the school authorities.  The first question, coming after the section requesting contact details, asked their gender, the second (which may have been incomprehensible to some) enquired whether their gender had changed since birth.  The third invited them to "please indicate your sexual orientation."  The options given were, in alphabetical order, Bisexual, Gay man, Gay woman/lesbian, Heterosexual, Transsexual or "Prefer not to say." 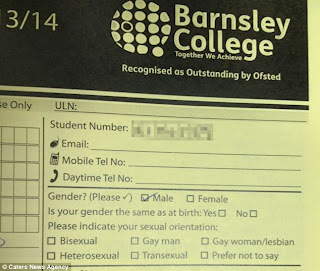 It is reported that some students were reduced to tears at being asked to disclose such personal information, not as part of an anonymous survey but on the front of a form that was designed to gather data about them as individuals.  I'm not surprised.  It could be argued that the question was optional, in that a "prefer not to say" box was provided.  But as one student was quoted as saying , she "did feel under pressure to tick a box and then if you ticked 'prefer not to say' it might make people question why you have done that."  Not all students would have felt such pressure, the breezily heterosexual ones least of all.  But it was wholly predictable that some would.

What does surprise me is that anyone imagined that putting such a form in front of sixth formers, some of whom might be vulnerable and confused about their sexuality, others of whom might be fearful of bullying and discrimination, was in any way appropriate, even in a town as blessedly free from homophobia as Barnsley.  Whoever devised and whoever approved the form should have no place in the education system, as they clearly have little understanding of sexual development or of the adolescent mind.

In what fantasy land is every 16 year-old secure and confident enough in their sexuality to be able to declare publicly - or at least to their teachers - which of those essentialist boxes they fit into?  Some will be.  But at that age, most are either at the beginning, or have not yet begun, their sexual lives.  They will have wildly differing levels of maturity.  Yet the bureaucratic mindset, which is interested merely in the assemblage of data, shows no understanding of the psychological impact that such intrusive questioning might have - if not on the majority, then on many of those whom equality laws are supposedly designed to protect.  For some of those youngsters confronted, quite unexpectedly, with a bluntly-worded request about their sexual orientation, it may have been the first time they had been expected to think in such terms.  It would have been a question better explored in a counselling session than on an official form.

When it comes to sexual orientation, the official dogma imagines a society that does not yet (and may well never) exist, one in which everyone is certain of their erotic identity and secure and confident enough openly to declare it.  Where there is no embarrassment surrounding sexuality, not even among 16 year olds, and where no-one minds intimate details about themselves being placed on a database accessible to school staff and, if the occasion arose, other professionals (and no guarantee that it would not be disclosed to their parents).  Where no prejudiced or ill-intentioned person would ever come across it, because prejudiced or ill-intentioned people are nowhere to be found in the ranks of public employees.

Barnsley College was, to begin with, predictably defensive, citing its duty under the 2010 Equality Act to collect statistical information about sexual orientation, as about gender, disability and ethnicity.  The initial statement noted merely that it was "a method of monitoring the success of protected characteristic groups."  Such weasel words, of course, reveal the true focus of their priorities: not the welfare of their students, but their data-gathering responsibilities under equality law.  But they were forced to change their tune after Wes Streeting of Stonewall, among others, criticised the form, saying that it was "not acceptable that students were asked to disclose their sexual orientation in a way that failed to respect their privacy" and that they "should have done their homework." Stonewall's own expert guide, aimed at companies employing adults, recommends that such questions be asked on detachable forms that can be separated and anonymised.

The college has now apologised and promised a review, "taking into account feedback from our students."  Yet this apparent change of mind only underlines the manifest incompetence of the school authorities, seemingly reliant on "student feedback" to educate them that a teenager's sexuality ought not to be a matter of public record, and that they should not feel under any pressure, however slight, to disclose it.

Even as a means of evidence-gathering, the form is basically useless.  It is likely to under-count gay and lesbian students, and those least likely to respond accurately are going to be those who might be in most need of protection.  Indeed, there is a huge incentive for those in the closet to lie because, in a society in which homophobia remains an issue, where there is even the slightest fear that the information might be misused, the only safe answer is "heterosexual": anything else, even "prefer not to say" is potentially compromising or may be felt to be so.  Is a teenager who has been bullied on account of (real or supposed) orientation then to be told that their bullying or underperformance is of no consequence because they don't form part of the school's official LGBT statistics?  Or if that isn't the intention (presumably it isn't) is that teenager, or even a teacher, nevertheless likely to think that their officially-designated status will make a difference?

Since the introduction of the public sector equality duty, there have been regular stories of bone-headed councils, quite unnecessarily, asking direct questions about the sexuality of tenants or of residents joining the local library, or even of companies asking job applicants to specify their orientation on recruitment forms.  It is unnecessary, even if the duty to collect data exists, because such information can be ascertained more accurately and with less possibility of causing offence through anonymous surveys.  I sometimes wonder if the aim isn't merely to collect information (with the laudable aim of targeting discrimination) but also to create a society in which no-one is allowed to be either private or in doubt about their sexual orientation and in which we all fit neatly into predefined boxes.

It's certainly the case that the Equality and Human Rights Commission has regularly expressed the view that some people's reticence about sexual orientation is an obstacle in the pursuit of their utopia.  The quango has laid down making sexual orientation "a public matter" as central to its policy in the area.  It has also publicly lamented the exclusion of a sexual orientation question from the 2011 census.  ECHR advice and codes of conduct stress the importance of canvassing information from employees and service users, and it suggests re-framing monitoring as "personal information sharing" as a way of persuading the reluctant to talk.

One EHCR report acknowledges that "data collection is not about intruding into the private lives of individuals," but then goes on to claim that the fact that some people continue to regard their sexual orientation as private holds back progress.  Openness is key.  "People should be able to have the right and choice to be open about their sexual orientation," it says - which is, of course, true.  But the EHCR seems unwilling to accept an equivalent right not to be open, partly because it seems to believe that such a desire for privacy would not exist in a truly tolerant society.  It's a form of victim-blaming that underestimates the courage that coming out still involves.

It is true that sexuality is nothing to be ashamed of and that many gay people, happily, are now proud and open about their orientation.  But you don't produce a tolerant society by causing vulnerable people shame and embarrassment or by imposing the cult of openness on people who consider their sexuality to be an essentially private matter.  That such a question should have been posed to teenagers, and with such disregard to its likely effect, is gobsmacking.  A moment's reflection should have been enough to decide that this was not appropriate.  It suggests school leaders whose brains have been reduced to mush by the bureaucratic tasks placed upon them in the sacred name of equality and diversity.
Email Post
Labels: Education equality Politics sexuality