Yes but... the Niqab debate 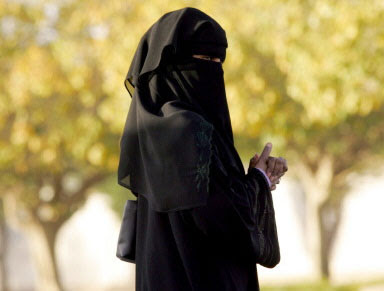 The niqab is an anachronistic garment that oppresses women. It embodies the idea that women are the property of men, have a lesser status and are repositories of sexual temptation. It's also a security risk. It should be banned, at least in public spaces such as schools or courtrooms. We should lay down a clear principle that in our society men and women are equal.

Yes but, in our society, no-one is forced to wear it. Women who wear the niqab are exercising a free choice. It is illiberal to forbid them from manifesting their religious beliefs in the way that they choose. It also amounts to discrimination against women, because no-one is seeking to ban religious attire worn by men, such as Sikh turbans.

Yes but, what of other women and girls who might not be exercising a free choice, but whose "choice" is being foisted on them by husbands or fathers? Banning the face veil allows them to discard it without being seen as "bad" Muslims or "bad" women. Should not society be promoting these women's freedom?

Yes but, as far as we can tell, such women are in the minority. Most women who choose to wear the niqab do so entirely voluntarily, sometimes over the objection of their (male) family members. For some young women, it is almost an act of rebellion, like dressing as a goth or wearing a very short skirt might be.

Yes but, no young women are being pressured by relatives to become goths or to wear overtly sexualised clothing. And even if girls choosing the niqab are going against the wishes of their parents, they may well have fallen prey to extremists. Have you ever noticed how terrorist suspects in court are invariably accompanied by heavily-veiled wives? The spread of the niqab is a sign of growing separatism and extremism in parts of the Muslim community, and if we don't act to discourage it as a society, more young women will feel pressure to conform. We owe it to those potential victims to take a stand. Instead, naive and well-intentioned liberals fight for the rights of extremists.

Yes but, the niqab hurts no-one except (arguably) the wearer, and then only because other people discriminate against niqab-wearers. The proper course of action is to educate the rest of society to not be prejudiced against women who choose to manifest their religion in this way. There's no reason why niqab-wearers shouldn't play a full and active part in our modern, multi-faith and tolerant society.

Yes but, that's probably asking too much of other people. The human face is a highly-evolved mechanism for communication. Psychologists tell us that a high proportion of communication - perhaps as much as 90% in some estimates - is non-verbal. The ability to read in someone's face their emotions, their intentions, even their honesty is a fundamental human skill, without which social interaction would be far more difficult. It's natural to want to see someone's face; it's not some giant conspiracy against Islam. It's also natural to distrust people who decline to share their faces with other people, as if they have something to hide.

Yes but, that's still the problem of the person who objects to the niqab. It's not the niqab-wearer's problem. Not everyone relies on non-verbal communication, anyway. Some people are blind. Even sighted people in this socially networked age can have meaningful exchanges with people they have never met or even spoken to.

Yes but, why should anti-social behaviour be encouraged, or at any rate condoned, just because it is done in the name of religion? If someone wanted to go to school wearing a V for Vendetta mask, perhaps to make some political point, would that be allowed? Why give special privileges to religion? Niqab-wearers may say that they are acting out of severe religious commitment, but the niqab is not compulsory in Islam. It's the choice of an eccentric minority, which is what it should stay.

Yes but, it's not just a matter of religious choice, or personal conviction. Many niqab-wearers say they feel more comfortable wearing it. They are not sexually objectified, reduced to their outward appearance, or subjected to sexual harassment or the stares of men. The veil protects them against the misogyny of wider society. It is above all an expression of sexual modesty, an outward sign of the conviction that they do not exist purely to gratify men.

Yes but, there is no more objectifying garment. It strips away a person's individuality, reducing her to a formless, shapeless mass. Besides, it is quite false to suggest that a woman wearing a niqab is not judged on her appearance. Assumptions will readily be made about her, true or otherwise: that she is an oppressed woman, that she is a religious extremist, or that she does not want to interact socially with other people. This will necessarily reduce her engagement in society. It is also dangerous to argue that for a woman to cover her entire body, and even her face, is an expression of "modesty": it's essentially the same argument as that which tells sees short skirts as an invitation to rape. It is insulting to both men and women. It also ignores the truth that some men find veiled women sexually attractive. And have you ever read the Arabian Nights?

Yes but, the niqab still represents a powerful rejection of a sexually objectifying, superficial and decadent western culture that judges women on their personal grooming and encourages a shallow, hedonistic approach to life.

Yes but really? Among those who choose to wear it, the niqab is a demonstration of narcissistic self-absorption. It's a demand for attention, attracting the stares that it is allegedly designed to deflect. Nothing says "look at me!" quite as assertively as a niqab in a society in which it is abnormal. It's an act of cultural aggression, not of submission.

Yes but, that's not the intention. The niqab wearer doesn't want to blend in but she does want to blend out. The niqab is liberating because it allows its wearer to ignore all that and concentrate on what really matters, which might well include education itself. To restrict the niqab would therefore be to force women to conform to an oppressive social standard.

Yes but, historically the emancipation of women has always been as much sartorial as political. In Victorian times, women were dressed up like dolls and barred from most areas of public life. Demands for freedom from imprisonment in corsets and long skirts went along with campaigns for the right to vote, to attend university and to join the professions. In the 1970s, feminists burned their bras as symbols of patriarchal oppression. But the bra itself was invented to free women, who were moving into the workplace and for the first time in modern history taking their full place in society, from the restrictiveness of the corset. Feminists today decry the "objectification" of lads' mags and internet porn, but these developments take place in the context of a society that offers unprecedented and growing opportunities and freedoms for women.

Yes but, it's historically inaccurate to suggest that the niqab is associated with oppression. The only reference to veiling in the Quran involves the wives of the Prophet: their concealment was a demonstration not of their subjugation but of their high status. The burqa and similar garments were originally the preserve of the upper classes, whose women never worked and often lived in purdah, only occasionally venturing out or receiving unrelated male visitors. The veil was an expression of their superiority over women who toiled in the fields or laboured as servants. Prostitutes, too, might often be veiled, and for an ironically similar reason: as proof of their exclusivity, their unavailability even to be gazed upon by any except those who could afford to pay.

Yes but, that makes the point, surely. The concept of a woman being both veiled and playing a full part in society makes no sense. The niqab was always a symbol of separation and segregation, of demarcation: of women from men, of Muslims from non-Muslims, of the leisured classes from those who had to work for a living. Historically, veiled women may have been privileged, living in a gilded cage, but they were always essentially the property of the husbands or fathers who could afford to subsidise their enforced idleness.

Yes but, the niqab today facilitates social engagement, rather than preventing it, because it allows women who would otherwise be kept at home to go out, to study, even to work without her modesty being compromised. Surely it's better for her to be free to leave the house, even veiled, than to remain indoors? That's far more "oppressive".

Yes but, at least if the niqab-wearer remains at home she isn't contributing to the normalisation of an inherently sexist and oppressive custom. It's a counsel of despair to suggest that society's response to a manifestly regressive and discriminatory custom is to accept it because the alternative might be even worse. Banning the niqab, at least in public spaces, isn't about telling people how they should dress. Rather, it's about sending a message about what kind of society we want to see. One in which men and women are equal citizens.

Yes but, suppose it was men who were required to wear veils. People wouldn't complain then that it was a signifier of oppression. Instead, women would be demanding the right to wear veils too.

Yes but, men aren't required to wear veils, are they? That's the whole point!

And so on. For what it's worth, I instinctively dislike the niqab and find the arguments of its proponents entirely specious. I'm naturally opposed to banning things, and I don't think that French-style criminalisation of the niqab is a realistic proposition here in any case. But I do think that the French commitment to secularism embodies an important principle that is all too easily lost in the laissez-faire liberalism of the UK, which slides too easily and too often into indifference. The French authorities, it's worth noting, take a much firmer line against female genital mutilation than do their British counterparts, who have somehow managed to bring not a single prosecution.

I would also argue that the social trends associated with the niqab - political extremism, extreme social conservatism and gender apartheid - are both regrettable and potentially dangerous. I think we should take more seriously the arguments of Muslim liberals, such as Yasmin Alibhai-Brown, who see in the spread of the niqab the growing power of narrow and regressive forms of Islam such as that associated with Wahhabist Saudi Arabia. It's worth remembering (but usually forgotten) that the campaign in France to ban the burqa was vocally supported and to some extent led by Muslim feminists - the very people whose voices are squeezed out of the British debate.

This isn't a simplistic question of freedom of expression versus secularism or social conformism. Personal freedom is an important principle but isn't the only thing that matters, nor is it a trump card. Nor is religion.
Email Post
Labels: Islam multiculturalism religion veils