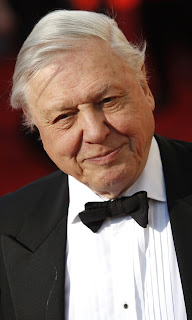 National Treasure he may be - and pillar of the liberal establishment - but twinkly, avuncular old David Attenborough has long been a Malthusian population bore.  So it's not really surprising to find him sounding like a stuck record in the Telegraph this morning, warning that nature will take revenge on our pullulating species unless people stop having children.  Especially in the third world.  He was defending his comments from earlier this year about human beings being "a plague", saying that this was "blindingly obvious" and that the planet was "heading for disaster unless we do something."

As for Nature's revenge - he managed to make it almost purposeful:


They've been having... what are all these famines in Ethiopia, what are they about? They're about too many people for too little piece of land. That's what it's about.  And we are blinding ourselves. We say, get the United Nations to send them bags of flour. That's barmy.

Actually, it's Attenborough who's barmy. Ethiopia is five times the size of Great Britain but has a roughly comparable population: there's plenty of room for more people. The famine of the 1980s, which indelibly fixed the world's perception of that country, was caused - and certainly prolonged - by a civil war as much as by rain failures.  The country's chronic poverty and underdevelopment didn't help much either.  Temporary famine relief is no substitute for economic development, of course, but it's more humane than sitting back and watching people die, and does at least preserve a country's human resources without which no development would be possible.  The productive parts of Ethiopia can be lush and bountiful: to suggest that it can't support a sizeable, and even growing, human population is to mistake circumstance for destiny.

Which is what Malthusians tend to do.  Ever since Thomas Malthus proposed, in 1798, that famine and pestilence would intervene to check the increase in human population, doom merchants (and their modern descendents in the green movement) have been predicting demographic disaster.  Malthus was wrong, of course, and not for a forgiveable reason: he somehow failed to notice that he was living through the agricultural and industrial revolutions that were as he wrote transforming the world's (or in those early days, Britain's) ability to sustain a steadily growing population.

A similar mistake was made a few decades ago by American professor Paul Ehrlich in his bestselling - but laughably wrong - The Population Bomb (1968).  Ehrlich forecast that the final decades of the 20th century would be characterised by devastating famines and the collapse of food production, to be followed by mass death.  "Hundreds of millions" would starve to death during the 1970s.  And the problems wouldn't be confined to the third world, either: by 2000, he predicted, the UK would be "a small group of impoverished islands, inhabited by some 70 million hungry people".  He thought that there was an evens chance that England would have ceased to exist by the turn of the century.

Trapped as he was in Malthusian circular reasoning Ehrlich didn't factor in the new agrarian revolution that was about to transform global agriculture.  One would imagine that having been so embarrassingly mistaken he would have recanted and retired into obscurity: but no, he's still actively promoting his misanthropic message even today.  The Guardian seems to give him a regular platform, often billing him as "the world's most renowned population analyst".  From last year, for example:


The optimum population of Earth – enough to guarantee the minimal physical ingredients of a decent life to everyone – was 1.5 to 2 billion people rather than the 7 billion who are alive today or the 9 billion expected in 2050, said Ehrlich in an interview with the Guardian.

"How many you support depends on lifestyles. We came up with 1.5 to 2 billion because you can have big active cities and wilderness. If you want a battery chicken world where everyone has minimum space and food and everyone is kept just about alive you might be able to support in the long term about 4 or 5 billion people. But you already have 7 billion. So we have to humanely and as rapidly as possible move to population shrinkage."

"The question is: can you go over the top without a disaster, like a worldwide plague or a nuclear war between India and Pakistan? If we go on at the pace we are there's going to be various forms of disaster. Some maybe slow motion disasters like people getting more and more hungry, or catastrophic disasters because the more people you have the greater the chance of some weird virus transferring from animal to human populations, there could be a vast die-off."

Like Attenborough, Ehrlich is one of the patrons of the pressure-group Population Matters, formerly the sinister-sounding Optimum Population Trust.  Since rebranding themselves, they've stopped publicising their preferred population levels, so it's not clear if they still advocate reducing the population of the UK to a "sustainable" twenty million.  Ehrlich's comments would however suggest that they do.  It would be unfair to describe the group or its supporters (who also include James Lovelock and Jonathon Porritt) as eugenicists or misanthropes, but as Brendan O'Neill once wrote, after attending one of their conferences, "there is something unavoidably spooky about people who spend their waking hours fretting about overpopulation, and who hand out leaflets saying ‘How many is too many?’ illustrated with a picture of an innocent-looking schoolgirl (white, of course) doing population sums on a blackboard".

Contrary to Malthusian assumptions, the population does not expand inexorably until it reaches natural resource limits.  It is quite capable of regulating itself.  Human beings aren't breeding machines but intelligent and rational creatures.  The most recent UN population estimates foresee the total human population expanding from its current 7 billion to around 9 billion by the middle of this century and then, or a little later, to stabilise or even slightly decline.  It won't be pestilence and famine that halt the growth of population: the rate of growth has been slowing for decades and in most advanced industrial countries has already gone into reverse (the increase in population in the UK is largely a product of immigration).

In country after country the pattern is the same.  As people live longer, as child mortality declines - factors that ought to spark a population boom - the birthrate goes down.  What intervenes to reduce the increase in population.  Three things, mainly: prosperity, the emancipation of women and birth control.  They tend to go together, and they happen without much prompting from Attenborough and his well-heeled friends at Population Matters.  Nor is there any need for an equivalent of China's draconian and cruel One Child policy.  The "something" that needs to be done to halt ever-rising population turns out to be a by-product of economic progress.

Nor is there any reason to suppose that scientific and technological progress will not come to the aid of a growing population, even one that as it becomes more prosperous demands a higher standard of living.  It always has in the past.  A gloomy Malthusian hunter-gatherer living at the end of the last ice age, when he wasn't warning about the looming threat of climate change (which was killing off all the mammoths and seemed likely to do the same for human beings too) would no doubt have been fretting about the capacity of the environment to support ever growing numbers of people and prophesying imminent disaster.  He wouldn't have foreseen the Neolithic revolution, still less the technological advances of the Bronze Age, to say nothing of the astounding industrial leaps of the past two centuries, all of which resulted in a more efficient use of available resources and thus enabled more people to be supported.  He would have made the mistake common to all Malthusians of imagining the natural environment as something to which human beings are subject rather than something that is made and remade by human beings.

Attenborough claimed in a lecture at the RSA in 2011 that "there is no major problem facing our planet that would not be easier to solve if there were fewer people, and no problem that does not become harder - and ultimately impossible to solve - with ever more."  But the truth is almost the opposite: the more people there are in the world, the more creativity and innovation tends to occur.  The industrial revolution was not wrought by hermits living in mud huts: it arose from the meeting of people and ideas in cities that were already expanding.  And the rate of progress has only speeded up since then.

Attenborough's gloomy prognostications will be proved wrong - but unlike Ehrlich, he won't be around to see it.