Boys will be (Tory) boys

We now know pretty well what next year's Labour election campaign is going to look like. "Don't vote for them, because they're toffs". The retreat to the politics of class hatred, prefigured in the Crowe by-election earlier this year, has informed Gordon Brown's recent soundbites. Alan "I'm just a humble postie" Johnson returned to it at the weekend. Mandelson, reportedly, isn't happy, nor I suspect are privately-educated members of the cabinet like Alistair Darling or Harriet Harman. The ugliness of the attack, and its obvious desperation, don't detract from its potency, however. Althought they wrought their havoc under Labour, under a financial regime devised largely by Gordon Brown, the evil bankers can convincingly be assimilated to Conservatives, perennially smearable as "the party of the rich". Even if the rich got richer under Labour than they ever did under the Tories.

Dan Hancox, writing for Prospect, has gone after an even easier (if less significant) target: Tory boys. He gatecrashed ("went undercover to") the Conservative Future Christmas party at the Warwick, Piccadilly, earlier this month, hoping, as he put it, "to see the next generation of Tory leaders do their pre-emptive general election victory dance".

He was, needless to say, on a toff-hunt. "Do I look like a toff?" asks a young man, who, according to Hancox, looks like a toff. Perhaps he really means "sounds like a toff"; or perhaps Tory and toff are so interchangeable in his mind that anyone walking into the party was instantly transformed into a tweed-wearing, fox-hunting, peasant-squashing member of the Bullingdon Club. My guess is that a small handful of party-goers - perhaps none - were genuine "toffs" (a word which, if it means anything, signifies a member of the aristocracy), rather more may have been bankers, and a fair smattering would like to be toffs but know in their heart of hearts that they aren't. They are, at most, playing at toffdom, as their left-wing contemporaries imagine they are saving the planet by camping in Blackheath or being battered by the police in Copenhagen.

Hancox's snarky piece, sarcastically entitled "Britain's bright Tory future", is illustrated by a photo showing four clearly inebriated young male Tories, who are presumably supposed to be representative of the species. One has a prominent brace in his mouth. They look harmless enough. 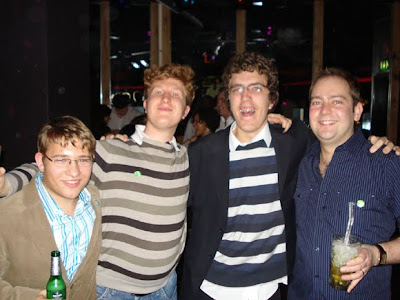 And the photo was taken two years ago, long before victory hoved into view (in those days, only the very foolhardy, or the very optimistic, would have predicted a Conservative victory). And what of this year's party-goers? Every cliché of the class war is present and correct. They are "floppy-haired", "young bloods"; one has a "ruddy burn-tan straight off the slopes" (he skis? burn him.) A small group of smokers hanging around the entrance is - I rather like this - "a hooray". At one point, conversation turns to the subject of names. "Jenkins is such a butler's name", jokes one (addressing someone named Jenkins). Hancox sees this as evidence that young Tories are "remarkably fixated" on class. I interpret it as irony.

Nevertheless, Hancox claims to have a serious point. In their Christmassy condition, some of the young Tories (the vast majority of whom, if his account of the evening is at all accurate, seem to have been male) behaved in a manner which might be construed as boorish, or just drunken, but which Hancox is keen to portray as stereotypically toffish. They also express opinions which seem to rattle our sensitive reporter.

One, for example, opines that while Cameron is an unfortunate necessity for attaining power, George Osborne is "the bloody man". I seem to remember Labour types preferring Brown over Blair in a similar fashion, in the days before the 1997 landslide. One makes a weak joke that Hancox interprets as "casual racism"; but it's a far cry indeed from the mid-eighties, when Tory boys indulged themselves in raucous singalongs of "Hang Nelson Mandela!" Now they just chant "Conservatives! Win! Oi Oi Oi!" to a hip-hop beat - a perfectly reasonable thing, I would have thought, to chant in the circumstances.

Does any of this matter? Hancox apparently thinks so. One party-goer is convinced that tomorrow belongs to him. "It’s called Conservative Future for a reason: we’re going to be in power in ten years!" he says. Well, some of them may be. The vast majority won't stay the course, or will find something else to do with their lives. And those who do eventually emerge as proper politicians will grow into far more nuanced and thoughtful individuals than they appeared to be at the Christmas party. David Cameron's own Bullingdon days are long behind him, however much Labour likes to bang on about it. It was at just such a gathering that a young right-winger named John Bercow first met a Hooray Henrietta named Sally, and look what happened to them. Strangely, many of New Labour's own leadership have managed to bury their own Communist pasts. Personally, I would much prefer to be governed by someone who misspent part of his youth drinking and throwing up than by one who sat around plotting the overthrow of society.

Tory boyism, in any case, has always been a pose. Conservative youth culture is a form of rebellion. Young Tories have always enjoyed being self-consciously obnoxious, mocking the right-on platitudes of their peers, winding people up. The aim is épater le bien pensant. This generation, having grown up under the most stifling, hectoring and self-satisfied government imaginable, can be forgiven for wanting to let their floppy hair down.

So no, this Christmas bash doesn't represent "a sobering glimpse of this country's future leaders", even if the report of it did fill Open Democracy's Guy Aitchison (on Twitter) with "a certain amount of dread". It does, though, probably represent a modest foretaste of the scenes we shall see on election night, before older and wiser Conservatives set about the gargantuan task of tying to rescue something from the wreckage of Labour's catastrophic mismanagement.
Email Post
Labels: Christmas conservatives elections Politics Sally Bercow