What Shishak (generally identified with Shoshenq I, c. 945 – 924 BC) did with these treasures once he had got back to Egypt isn't recorded. Presumably he had the gold shields melted down and turned into something else - Egypt was never short of goldsmiths, after all - while he may have kept some of the more ornamental treasures to decorate his palace. The ancient Egyptians didn't, so far as anyone knows, have public museums, and it's most unlikely that two hundred years later a delegation came from Jerusalem to demand the goods back.

That, though, is what the publicity-hungry head of the Egyptian Council of Antiquities, Dr Zahi Hawass, is doing. He has a list of the most famous artefacts of Pharaonic Egypt that have been dispersed across the world since the country first attracted the attention of European archaeologists at the beginning of the 19th century, and he has been making increasingly strident demands for their "return". Today he's been in London demanding (not for the first time) that the British Museum hands back the Rosetta Stone, which has been happily sitting there since 1803. It belongs to Egypt, he argues, because more than two thousand years ago it was carved there, by people who may or may not have been the ancestors of modern Egyptians. It's not much of an argument. 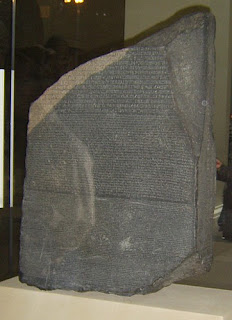 If Hawass had his way, the world's museums would be emptied of Egyptian artefacts, or at least of everything of beauty and interest (he also, for example, wants the bust of Nefertiti returned from Berlin). And to what purpose? Not, surely, to the enhancement of Egypt. Hawass already has the Pyramids and the Valley of the Kings. The treasures of Tutankhamun are in Cairo, as are the mummies of most of the significant pharaohs whose remains have been preserved. Every year new treasures are reclaimed from the rich sands of the Nile Valley, more often than not by international teams which nevertheless dutifully give up their finds to Hawass's already overstuffed museums. To ask for more is just greedy.

Some countries - Egypt, Greece, China, Italy (especially Italy) - have more than their fair share of cultural patrimony, a small proportion of which has been exported abroad. This process has not only taken knowledge and appreciation of the original cultures far beyond their borders, it has often inspired new creativity in the lands to which they've been brought. Even theft enriched the societies that indulged in it. There could have been no Michelangelo without the ancient Greek sculptures that inspired him, sculptures plundered by the Romans a millennium and a half before his birth. By such (to us) dubious activities the generals and emperors demonstrated their taste as well as their power. The alternative to looting, after all, wasn't to leave things alone, it was to smash them up. As for the heritage of Egypt, for centuries it was appreciated only in Europe. In Arabic-speaking and Islamic Egypt the remnants of the ancient civilisation were regarded with a combination of superstition, indifference and religiously-motivated disapproval.

The age-old tradition of plundering artworks - already well-established in Shoshenq's day - continued right up until the Second World War, but Britain, which like the United States has received more great art than it has managed to produce, has rarely been guilty of looting. Our museum-pieces, by and large, were picked up legitimately on cultural expeditions, collected by grand tourists, or (like the Elgin marbles) acquired lawfully from the local authorities. But however it has occurred in the past, the movement of artefacts is part of the great human story of cultural exchange and influence. Hawass's demand for the Rosetta Stone misses this. But there are also specific reasons why he has no claim on it.

What is the Rosetta Stone, after all, except a slab of text? It isn't particularly interesting or distinguished in itself. It's neither beautiful nor intrinsically valuable. It's a boring piece of Ptolemaic state propaganda, recording the granting of a tax concession to some local temple, not much more than a departmental press release - though written in the exalted prose that was the ancient equivalent of spin. I doubt the inhabitants of Hellenistic Egypt ever gave it much thought. For several hundred years it was propping up a wall, and no-one paid it the slightest attention. But then it was found by a member of the French military expedition that arrived with Napoleon right at the end of the 18th century. It was the French, not the Egyptians, who realised that with its bilingual text the Stone offered a unique opportunity to crack the hieroglyphic code, the meaning of which had defeated scholars and mystics for centuries. And although it was soon enough nabbed by the British, it was a Frenchman, Jean-François Champollion, who made the decisive breakthrough.

There is, perhaps, a case for the Rosetta Stone to be returned to Paris, although the French have not yet demanded it. But there is none for it to be sent back to Egypt. For the importance of the Stone lies in the spur it gave to the Europeans who created modern Egyptology. Without Champollion, the boasts of pharaohs and the thoughts of scribes would be a closed book, there would be no annual influx of tourists eager to soak up romance of the Nile valley, and Dr Zahi Hawass himself would be out of a job.
Email Post
Labels: archaeology culture history