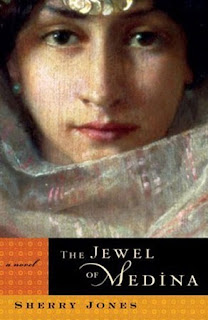 The case of Sherry Jones and her novel The Jewel of Medina has reawakened memories of the fatwa against Salman Rushdie 20 years ago. As books, of course, the two have very little in common. Rushdie is a major writer and The Satanic Verses was an important novel. Jones is a previously unknown author, and on the evidence of those parts of Jewel that have been released online, deserves to remain so. Rushdie was published, despite serious riots, actual violence (the Japanese translator of his book was murdered) and the involvement at the highest level of the Iranian state. Jones's book was withdrawn because of fears of what might happen if some Muslims didn't like it.

This week, the saga got rather more serious, with a handful of extremists arrested in the course of a fire-bomb attack on the small London-based publisher who had agreed to bring out Jones's novel. But the only Muslim voice the BBC found to lend any kind of support to the campaign against Jewel belonged to Anjem Chaudhury, loudmouth sidekick of deported extremist preacher Omar Bakri Mohammed, he of the pole-dancing daughter. "It is clearly stipulated in Muslim law that any kind of attack on his honour carries the death penalty," said Chaudhury. But there's no evidence that the widespread disorder and public book-burings that were so memorable a feature of the Satanic Verses imbroglio - or indeed the Danish cartoons - would be repeated this time. The withdrawal of the book by publishers Random House still looks like a grotesque overreaction.

To many who deplore Random House's decision, their attitude is, in itself, one of the biggest dangers to free speech currently existing. On Comment is Free, Jo Glanville of Index on Censorship had this to say:

Random House's actions show just how far we have lost our way in this debate over free expression and Islam: the level of intimidation, fear and self-censorship is such that one of the biggest publishers in the world no longer felt able to publish a work of creative imagination without some kind of dispensation. Jones's book does not claim to be a piece of history - it's a work of invention.

It was also disingenuous of Random House to suggest that the novel might incite violence. Certain members of the population might choose to commit an act of violence, but that is not the same as the book itself inciting violence. To pass the responsibility in this way to the novel was a betrayal of the author and of free speech.

Her view echoed some comments made by Kenan Malik in The Times:

What the differing responses to the two novels reveal is how Rushdie's critics lost the battle but won the war. They never prevented the publication of his novel. But the argument at the heart of the anti-Rushdie case - that it is morally unacceptable to cause offence to other cultures - is now widely accepted. In the 20 years between the publication of The Satanic Verses and the withdrawal of The Jewel of Medina, the fatwa has in effect become internalised.

...In the past, free speech was viewed as an inherent good, to be restricted only in exceptional cases. Today it is seen as an inherent problem, because it can offend as well as harm, and so has to be restrained by custom, especially in diverse societies. These days not only do publishers drop books deemed offensive, but theatres mutilate plays, opera houses cut productions, art galleries censor shows, all in the name of cultural sensitivity.

I heartily agree with both these sentiments. I wonder, though, to what extent "cultural sensitivity" or internalised censorship of the type imputed to lily-livered Western appeasers is the main culprit. Fear of "causing offence" is real - but does it derive from a sincere desire not to cause offence, or from a fear of the consequences that causing offence may bring? The end result - non-publication - may be the same, but the psychology is very different, and so, perhaps, is the resulting atmosphere. If you believe, as some politically correct "left-liberals" undoubtedly do, that causing offence to someone's deeply held convictions is wrong in itself, then you have already committed cultural suicide in your heart.

Ironically, Sherry Jones herself would seem to be of that tendency. In hand-wringing interviews, she has protested that she holds both Mohammed and his child-bride Aisha in the highest possible esteem, and that her intention was only to bring home to readers in the west what remarkable people they were. Her detractors, Muslim and otherwise, may have thought that her book amounts to tawdry, pseudo-historical soft porn, but she would seem to regard "causing offence" just as dimly as they do. She doesn't strike me as a stout defender of free speech - which means, if it is to mean anything at all - the freedom to be offensive, satirical, rude and disrespectful.

Actually Jones doesn't remind me of Rushdie so much as of Gillian Gibbons, the well-meaning British teacher who got into so much trouble in Sudan last year for naming a teddy bear "Mohammed".

Salman Rushdie was playing a very different game. For a start, he wasn't really writing about Islam at all. He was writing, rather, about the immigrant experience: the controversial passages in the Satanic Verses were dream sequences. If you haven't read it, you may have heard it described as unreadable tosh. It isn't. It has a rather complex narrative structure, but the story comes through clearly enough and Rushdie is, whatever else you may think of him, a wonderful storyteller. On the other hand, the Mohammed-like character "Mahound" - a fantasy in another character's head - is depicted as a con-man, and the passages in which he features were plainly intended by Rushdie as a satire on the origins of Islam. Mahound has highly convenient revelations and ruthlessly organises a massacre.

To Muslims brought up from the cradle to regard the character of Mohammed as sacrosanct, as a model and pattern, such thoughts are by their very nature offensive. That, however, is their problem, not the West's (and not Rushdie's). It could even be argued that in their insistence on resisting any slight on their prophet, or any description of him beyond the crawlingly reverential, some Muslims come close to the idolatry that they are supposed to shun. In any case, the battle over The Satanic Verses was an important one.

So are Malik and Glanville right? Self-censorship there undoubtedly is: in Britain especially. No major British newspaper had the balls to run the Danish cartoons, even while they were being republished everywhere else in Europe. Publishers cited prudence - not wishing to "inflame opinion". They sometimes even cited cultural sensitivity. Few had the honesty to admit the real reason: fear. Random House at least came clean on that one. They pulled The Jewel of Medina, they said, because, according to an official statement, they had received "credible" reports that the book "could incite acts of violence by a small, radical segment". They cited protection of their staff, and the author herself, as grounds for their decision. Since they also publish The Satanic Verses - a bright new edition came out earlier this year - I see no particular reason to disbelieve them.

Another reason for their apparent cowardice, however, may be more nakedly commercial. One change over the 20 years since the Satanic Verses fatwa is that protest against perceived slights on Islam is no longer the preserve of spontaneous grassroots campaigners, even abetted by elderly ayatollahs from rogue states like revolutionary Iran. Respectable Muslim governments have also become involved. There were widespread boycotts of Danish products in response to the cartoons. While much lip-service is paid to the sanctity of free speech in the West, the only truly sacred principle in the US and Europe is the bottom line.

For governments in the West, trade is also an issue. There is even fear of the power of oil states. There are votes at stake, too. A government may not want to distance itself too clearly from the deep pain felt by religious believers, especially if it is of a party that traditionally relies on votes from that community. Hence the mixed messages about the need to balance competing "rights" we sometimes here from ministers.

Certainly no-one seems happy at the moment. The easily offended are as angry as ever. Defenders of free expression feel let down. Inayat Bunglawala, who seems to have recanted his former antipathy towards free speech and now even claims that "Rushdie was right", is surely accurate in his belief that the Rushdie case did untold damage to the image of Islam in the west:

Some months back I had dinner with a well-known British columnist who has some rather strident views about immigration and Islam. I asked him outright what it was that so annoyed him about Islam and he said it was what he viewed as the seemingly constant attempts by Muslims to try and restrict freedoms.

And regrettably, like it or not, that is the image too many people now have of Muslims.

But Bunglawala lives in Britain. His claim that many British Muslims now agree with him is of limited significance when set against ongoing attempts by the 57 member Organisation of Islamic Conference (with the tacit and cynical support of Russia and China) to re-write international law and make "defamation of religion" something akin to a war-crime.

The forces ranged against freedom of expression in this area are greater than they were twenty years ago: more subtle, better organised, richer. Some well-intentioned but intellectually lazy Western liberals are too willing to listen to their arguments. But the real betrayals stem from a less principled combination of fear and self-interest. Call it "Islamophobia", if you like: many people are just scared of Islam.
Email Post
Labels: blasphemy books culture gender politics Islam religion respect

Anonymous said…
I think you're spot on H. Self-censorship does not come from the fear of hurting feelings, it's the fear that it will come back at you in the form of intimidation or violence. It's the same reason there isn't enough criticism of Scientology (only with them it's stalking and litigation rather than firebombs). Does it relate to a general kind of nation-wide fear of getting involved with anything, whether it is telling someone to pick up their litter, trying to stop a fight or standing up to religious bullies?
1 October 2008 at 09:22