Palin and Paleontology: the story evolves 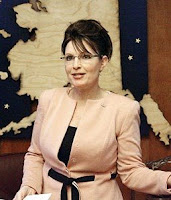 Via New Humanist, I discover what might or might not be the smoking gun in the Sarah Palin/ Creationism mystery. Anti-Palin blogger Philip Munger, who calls himself the Progressive Alaskan (he's far from alone up there, incidentally) recalls having a conversation with her in June 1997, when she was Mayor of the important (for Alaska) but tiny (for anywhere else) town of Wasilla. It was at a "graduation ceremony for home-schoolers" which may be relevant: there's a considerable overlap in the US between home-schooling and creationism. The ceremony, moreover, was being held at Wasilla Assembly of God church, which Palin then attended. According to Munger:

As the ceremony concluded, I bumped into her in a hall away from other people. I congratulated her on her victory, and took her aside to ask about her faith. Among other things, she declared that she was a young earth creationist, accepting both that the world was about 6,000-plus years old, and that humans and dinosaurs walked the earth at the same time.

I asked how she felt about the second coming and the end times. She responded that she fully believed that the signs of Jesus returning soon "during MY lifetime," were obvious. "I can see that, maybe you can't - but it guides me every day."

It's not clear what prompted Munger to bring up the subject, since Palin was not at that time a major political figure. I don't tend to ask people I've just been introduced to what they think about the Book of Genesis. Perhaps she alluded to it in her speech. Nevertheless, this at first seems to be solid evidence that Sarah Palin is, indeed, a creationist. Or at least, she was.
Fast forward a few years:

Our next discussion about religion was after she had switched to the less strict Wasilla Bible Church. She was speaking at, I was performing bugle, at a Veterans ceremony between Wasilla and Palmer. At this time, people were beginning to encourage her to run for Governor.

Once again, we found ourselves being able to talk privately. I reminded her of the earlier conversation, asking her if her views had changed. She was no longer "necessarily" a young earth creationist, she told me. But she strongly reiterated her belief that "The Lord is coming soon." I was trying to get her to tell me what she felt the signs were, when she had to move on.

In her much discussed comments during and after a televised debate in 2006, Palin seemed at first to suggest that creationism and evolution should be given something like equal billing. She referred to it as "healthy debate". She later backtracked and stated that she believed merely that creationism might be discussed if it is "brought up" in class, which is more or less the line taken by Prof. Michael Reiss, who has been forced to resign his position in the Royal Society as a result. Either position might be taken by someone who is not, themselves, a creationist: for political reasons, for example, or from the mistaken belief that a science class is an appropriate venue for such a discussion.

In an interview she also recalled childhood conversations with her father, a science teacher, about "his theories of evolution" and stressed her belief in "a creator"; but she came close to denying being a convinced creationist when she said, "I'm not going to pretend I know how all this came to be". A real creationist does know: it says so, after all, in the Bible.

Munger's suggestion that Palin may have changed her opinion along with her church is an interesting one. A couple of weeks ago the New York Times ran an article about Palin's religious background. The Assembly of God church would seem to be rather hardline. It was to that congregation that she delivered a much-discussed address back in June, in which she expressed the belief (or was in merely the hope?) that the US soldiers in Iraq were on a "mission from God". It has even emerged that an African evangelist, who is a regular guest preacher at the Assembly and who prayed over Palin in 2005 while she contemplated running for governor, also has a successful career as a witchfinder.

The New York Times quoted Palin's long-time colleague Janet Kincaid as saying that "The churches that Sarah has attended all believe in a literal translation of the Bible" - including Wasilla Bible Church (well, the clue's in the name). However, the report continues,

One of the musical directors at the church, Adele Morgan, who has known Ms. Palin since the third grade, said the Palins moved to the nondenominational Wasilla Bible Church in 2002, in part because its ministry is less extreme than Pentecostal churches like the Assemblies of God, which practice speaking in tongues and miraculous healings. She added: “A lot of churches are about music and media and having a big profile,” Ms. Morgan said. “We are against that. That is why it is so attractive to politicians because they can just sit there and be safe.”

It seems likely, then, that Palin went through a creationist "phase" when she became a born-again Christian, but has modified her position in recent years.

Does it actually matter what Palin believes about the dinosaurs? In a word, yes. Richard Dawkins turned up on Horizon last night, as one of a number of scientific talking heads giving "advice" to the next US president. People who believed in creationism, he declared, were "either ignorant, stupid or mad". Having learned about nature at her father's knee, Palin has no excuse for ignorance, and she doesn't strike me as either stupid or mad. There's another possibility, though: that creationists are deluded, caught up in an all-encompassing mental trap that makes them unable to see reality. Not something to be desired in someone in a position where mental flexibility ought to be a prerequisite.

Creationism doesn't come on its own. In that respect at least Michael Reiss was right: it's part of an entire world view. It is merely one part of a much larger structure of fundamentalist belief. Belief in the literal truth of the Bible underpins it, of course: but so, too, does the whole scheme of salvation. Jesus died for the sins of mankind, goes the theory. This belief entails others: for example, that mankind is in a state of sin. Sin exists because of the Fall: Adam and Eve sinned, and that Original Sin has been transmitted to all succeeding generations. No Adam and Eve, no Garden of Eden, no Original Sin: no need for Jesus. Similarly with the "young earth". Given that the creation, fall and redemption of man is (according to traditional doctrine) the whole point of the universe, then the idea that it is around 15 billion years old, whereas modern human beings have been around for about one hundred and fifty thousandth of that time, leads to problems of scale. Of course God, who can do all things, could have spent those billions of years twiddling his divine thumbs waiting for man to arrive; but contemplating the immensities of time and space tends to make the traditional religious narrative seem rather parochial.

"Young earth" creationism exists in a closed system, and leads directly onto the apocalyptic pre-millennial beliefs that Palin also appears to subscribe to. That said, it has more rather more intellectual coherence than "intelligent design", which in most of its manifestations attempts both to accept the findings of science regarding the age of the earth while picking holes in Darwinian evolution by seeking out "hard to explain" cases. It thus tries to import the notion of individual divine creation of species from a paradigm in which it makes sense - "Bible-based" fundamentalist Christianity - into another, modern science, where it has no place.

The result is neither scientifically nor religiously satisfying: which is why most Christians who accept the findings of science when it comes to the age of the universe have no problem with evolution. That goes, not just for ever-liberal Anglicanism but for the Roman Catholic Church, too. They are organising their own events to celebrate next year's Darwin anniversaries. Asked whether an apology would be forthcoming, the Vatican's Archbishop Gianfranco Ravasi commented that Darwin was "never condemned by the Catholic Church nor was his book ever banned".

Clearly the Catholic Church had learned some lessons from the Galileo business.

valdemar said…
Re: the Catholic Church. Isn't their laid-back attitude to evolution simply down to the fact the Bible is less central to their faith?
17 September 2008 at 19:14

Anonymous said…
There is yet another option for creationists, Gosse's theory

that the earth was created as if it were old. I remember coming across it in a great old OU course, Science and Belief, and being struck by Kingsley's challenge that he could not believe that God had planted an 'enormous lie' in the rocks.

On the other hand, well - I think Russell said that we couldn't tell if the earth and all our memories of had just been created half an hour ago!
17 September 2008 at 21:34

Anonymous said…
So what if she has irrational views? plenty of folks do, and not just people with low IQs, for example quite a few clever people believed that mortgage and loan risk could be reduced through the use of complex financial instruments, and these clever folks have not had their irrational beliefs in computer models battered by the credit crunch, they have another complex financial instrument developed by computer models all ready to go, its called carbon credits.

Lehman were planning on being big players in the market according to their web site...and some folks worry about creationism?
17 September 2008 at 22:43

Anonymous said…
and some folks worry about creationism?

Anonymous said…
Edmund Gosse was ridiculed by both sides, i.e. Young and Old Earthers, because Omphalos creationism makes God out to be a bit of a tosser. As indeed does all basic modern science. All that time and effort, all those galaxies and aeons, for the sake of one ephemeral species on one planet? I suspect creationists find it easier to believe the downright impossible because to take the 'sensible' religious view requires embracing the wildly improbable.
19 September 2008 at 09:15