You'd have to have a heart of stone not to feel a slight twinge of sympathy for Inayat Bunglawala when you read something like this:

Yesterday afternoon, I got a call from GMTV inviting me on to their Newshour show in the morning. "We want to do a balanced piece making clear to our viewers that these people do not represent the views of all Muslims," said the woman...

A few hours later, I got another call from GMTV. They had managed to get hold of Anjem Choudary, who was, of course, totally supportive of the actions of the protestors, and he had agreed to come on to the show to say so publicly. So, er, they would not now need me to come on to the programme. Well, so much for seeking to do a "balanced piece"!

Poor Bungle. In the days when he was organising "Death to Rushdie" marches and (as he revealed in a BBC documentary the other day) idolising the Ayatollah Khomeini he got plenty of publicity. The well-upholstered, government-funded, chippy "community leaders" of today owe their prominence, influence and power to the sense of Muslim identity they helped to foster during the Rushdie affair. And how did they get their message across? By burning copies of The Satanic Verses. By publicly backing the fatwa. By coming out with juicy quotes and slogans. Bunglawala's mentor, former MCB head Iqbal Sacranie, told a TV camera that "death was too easy" a fate for Salman Rushdie. He's now "Sir Iqbal".

These days, of course, Bunglawala has put all that behind him. Like Gerry Adams and Martin McGuinness, he's now happy to denounce those embarrassing people who will insist on continuing to do the sorts of things he used to do. So when a small group of perhaps fifteen former members of the banned radical group Al Muhajiroun (this week calling themselves Ahlus Sunnah wal Jamaah) demonstrated at a march-past of troops in Luton, he was understandably keen to distance himself from his co-religionists: 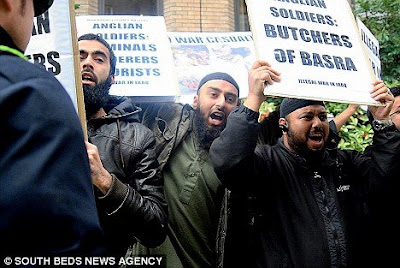 Al-Muhajiroun and its variously named successor organisations have always craved media attention in order to help further their goal of creating discord and polarising relations between communities in the UK. Although our news channels and newspapers have adopted a very disapproving tone, the truth is that they have been very much complicit in promoting the divisive agenda of al-Muhajiroun all this time.

He's right, of course, about the skill with which Anjem Choudary and his sidekicks manipulate the media. They know that the tabloid press are ever alert to any signs of disrespect for "our boys", that they love being scandalised by "hate preachers" and men with strange beards holding placards, and that so long as a demo is peaceful the police will protect it, generating more opportunities to complain about political correctness. It's a win-win situation: the angry mob get their pictures in all the newspapers (and the TV too, if they're lucky), the press gets to exploit one of its favourite stereotypes, and politicians get an opportunity to grandstand and demonstrate their love of the armed forces. Though a cynic might think that there were more practical ways in which the political class could show their respect - by providing better housing, for example.

I can't help noticing that Bunglawala seems more troubled by the protestors' success in gaining publicity than by the insult to the troops itself. Similar thoughts were prompted by this press release that appeared on the website of the Muslim Council of Britain:

The MCB is appalled at media reports of the scenes at a homecoming parade for British soldiers in Luton on 10th March 2009. This small minority do not speak for Muslims but instead provide fodder for Islamophobes keen to drive a wedge between Britons.

The first sentence is ambiguous, but it suggests the MCB is more appalled by the coverage than it is by the protest itself. Its main complaint against the protestors would seem to be the fodder they provide for "Islamophobes" rather than the insults that they offered to the soldiers. This inverted sense of priorities, of course, is something that we have become familiar with over the past few years from the MCB.

A more "radical" grouping, but one which has quite successfully positioned itself in the media as a "progressive" pressure group supporting such things as greater participation by British Muslims in politics or better facilities for women in mosques, has an even more sympathetic post on its website, though one which also makes the point that the Luton demo is bad for the image of Islam:

We welcome the fact that the anti-war protestors carried out their protest peacfully. They are well within their rights to protest at the 1 million dead in Iraq because of the whims of Bush, Blair and their Ziocon stooges.

Whilst all anti-war protesters care for the troops on the whole, we are not blindly patriotic to the extent that we will turn a blind eye to the errors of the Armed Services.

Blaming troops, however, is perhaps not the wisest thing to do, neither is condemning the anti-war protestors as they are both consequences of a calculated ziocon agenda.

Says one of the commenters, Nasr:

Well done to those who demonstrated against the parades. They have laws against glorifying terrorism and terrorists, so how is it allowed for people to celebrate the return of those who are complicit in the illegal war on terror. And to say the soldiers had the best of intentions is not good enough justification as i'm sure Hitler and his nazi army would have given the same response. Every one has been given sufficient intellect by Allah to tell right from wrong and merely saying that 'i was doing a job'will not save one's soul for commiting murder.

That view wasn't universally shared: in fact, the comments were fairly split, with several denouncing the demonstration. But such opinions suggest that the placard-wavers of Luton are not entirely lacking in support. In any case, the demonstration was eminently newsworthy, precisely because it was so extreme. That's journalism, folks. Inayat Bunglawala, of all people, ought to appreciate that.
Email Post
Labels: Al Muhajiroun Islamism Islamophobia journalism Politics religion terrorism

asquith said…
Am I the only person who thinks Bunglawala & friends are more of a threat to secular values than the totally flagrant nutters?
11 March 2009 at 20:17

Goodness me, do you really believe this? You might want to take a look at the Guardian (http://www.guardian.co.uk/uk/video/2009/mar/06/police-surveillance-climate-camp-journalists)or some of the Fitwatch material.
11 March 2009 at 22:33