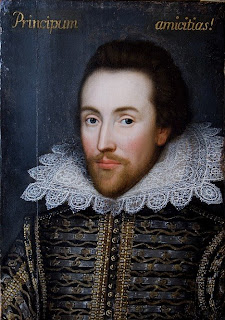 A couple of weeks ago someone claimed to have found the Lost City of Atlantis on Google Ocean. The story was much covered in the press, above all by the Sun, but it didn't last very long. Google waited just long enough to ensure maximum publicity for their new add-on before explaining it away as the creation of a mapping process. Fear not, there was another discovery from the mysterious past announced this week: a new (or newly identified) portrait of William Shakespeare.

Superficially, Shakespeare and Atlantis may seem to have little in common. For one thing, few serious scholars would put much credence in the Atlantis myth, whereas with Shakespeare it is the doubters who find themselves in an eccentric minority. But there has long existed around the Bard a penumbra of pseudoscience, conspiracy theory and wishful thinking. His life is commonly believed to have been profoundly mysterious - although it is, in fact, better documented than most lives of the time and less mysterious than many. It was, perhaps, disappointingly boring - in comparison with those of Christopher Marlowe or Philip Sydney, very boring indeed. Perhaps that's the point. In the absence of actual mystery or excitement, invented mystery or excitement will have to do.

In his book Shakespeare: For All Time, Professor Stanley Wells gives some prize examples of "dottiness":

A Sicilian teacher claimed that Shakespeare was born in Messina and Michelangelo Florio Crollalanza. South African scientists proposed that Shakespeare smoked cannabis on the basis of a misinterpretation of a phrase ("keep invention in a noted weed") in Sonnet 76 along with the discovery that pipes found in Stratford showed traces of the drug. A German scholar claimed to have found evidence that Elizabeth Vernon, who married [Shakespeare's patron] the Earl of Southampton, was the Dark Lady of the Sonnets, and that Shakespeare had an illegitimate daughter by her, from whom Princes William and Harry are directly descended...

Wells also mentioned an alleged Shakespeare portrait of 1603, the "Sanders" portrait, whose claims have recently been revived. He thinks that there's little reason for the attribution, however, since "a now almost illegible label giving the date of his death as well as of his birth was clearly added years after the portrait was painted."

By contrast, Professor Wells - described in the Mail as "the world's top expert on the bard" - is the prime force behind this latest claim. "My first impression was scepticism - I am a scholar" he is quoted as saying,

But my excitement has grown with the amount of evidence about the painting. I am willing to go 90 per cent of the way to declaring my confirmation that this is the only lifetime portrait of Shakespeare. It marks a major development in the history of Shakespearian portraiture.

At the news conference on Monday, Wells described the portrait as a "pin-up". And he's certainly plugging it for all it's worth. According to the New York Times:

In a handout for reporters, the trust said the portrait might open a new era in Shakespeare scholarship, giving fresh momentum, among other things, to generations of speculation as to whether the playwright, a married man with three children, was bisexual. Until now, that suggestion has hinged mostly on dedications to the Earl of Southampton that Shakespeare wrote with some of his best-loved poems and some of the sensual passages in his poems and plays, particularly his sonnets, most of which, the London scholars said, are centered on expressions of love and desire for men, not women.

“This Shakespeare is handsome and glamorous, so how does this change the way we think about him?” the handout said. “And do the painting and provenance tell us more about his sexuality, and possibly about the person to whom the sonnets are addressed?”

Perhaps, but it may tell us more about the desire of Wells to promote his new exhibition, Shakespeare Found, which opens next month in Stratford. To move from a tentative identification of a painting to drawing conclusions about Shakespeare's sexuality and career seems remarkably ambitious.

The story behind the discovery is rather strange. It has long been in the family of Alec Cobbe, where it was previously thought to depict Sir Walter Raleigh. Mr Cobbe, we are told, began to speculate that it might be a portrait of Shakespeare in 2006; while visiting the Searching for Shakespeare exhibition at the National Portrait Gallery, noticed a copy of his painting hanging there as one of a number of alleged Bards. That picture came from the Folger Shakespeare Library, Washington - and had been accepted as a life portrait of Shakespeare until some 70 years ago, when it was found to have been altered during the 18th century. So this is not so much a brand new image as the rediscovery of an old one.

But what is there, other than wishful thinking, to link the portrait to Shakespeare? Not a great deal. The painting seems to have come into the Cobbes' possession via the great-granddaughter of the Earl of Southampton, who was Shakespeare's patron (and probable dedicatee of the Sonnets). At least that is Wells's contention: other accounts state simply that some of paintings in the Cobbes collection came from Southampton's descendant. There's also a quotation from Horace, principum amicitias ("friendships of princes" or, more accurately perhaps, "alliances between leading men") which is "addressed to a playwright" according to much of the coverage. That's pushing things a bit: it was actually addressed to Gaius Asinius Pollio, who was more of a soldier and (as readers of Robert Graves may recall) an historian, though he wrote poetry on the side. There's nothing in the tag, nor in the poem from which it comes, to tie it to Shakespeare.

It might be Shakespeare. It looks vaguely like other representations of the playwright, although with it has rather more hair, and is better looking, and better dressed, than the canonical versions (such as the engraving in the First Folio). But its pedigree seems far too doubtful for the link to be anything more than conjectural. It may have belonged to Southampton's great-granddaughter - but (unless there's something they're not telling us) there's no proof that she inherited it from him. The fact that one copy of the portrait was altered during the 18th century to make it look "more like Shakespeare" is scarcely evidence that it was a picture of Shakespeare originally, only that someone very much wanted it to be so, and was prepared to resort to fakery.

And there are other reasons for doubting the Shakespeare identification. The man in the picture was dressed as an aristocrat, and the most plausible interpretation of the Horatian phrase is that he was a friend of royalty - something that an actor and playwright, even a successful one, couldn't hope to be. The portrait is said to date from 1610, when Shakespeare would have been 46. Even by today's standards, however, the man in the picture doesn't look older than thirty - and in the early seventeenth century most people in their forties would have been stooped, blotched and generally decayed. In addition, there is good circumstantial evidence that Shakespeare suffered from syphilis, something that would certainly have been evident in portraiture. Even if this were intended to be a portrait of Shakespeare, then, there's no reason to think it looks anything like him.

Above all, the chances of this painting being of Shakespeare must statistically be fairly low, simply because there were many more people around in 1610 having their portrait painted who were not William Shakespeare than there were Shakespeares.

We're left with the scholarly credentials of Stanley Wells, but here to we should perhaps tread carefully. He is, after all, a literary scholar rather than an art historian, and it might be that, having got over his initial scepticism, he fell prey to the same kind of enthusiasm that afflicted Hugh Trevor-Roper when he authenticated the "Hitler diaries".

This kind of wishful thinking is the hallmark of pseudohistory. Wherever the facts are unclear, the personage or legend glamorous, and proof all but impossible the hopeful eye will detect the glint of gold. It was the impulse that led Heinrich Schliemann, digging up a gold mask of a warrior-king at Mycenae, to cable home "I have gazed upon the face of Agamemnon", or that leads over-enthusiastic, publicity-hungry Egyptologists to label any unknown mummy as Nefertiti. Last year, amid comparable fanfare, the discovery was announced of a bust of Julius Caesar, "taken from life", at Arles in southern France. The bust had a certain superficial resemblance to the great dictator, viewed from a certain angle, but there was no real evidence that it was Caesar, still less that it was carved from life. But, just as with the Cobbes portrait, a noted expert was taken with it and somewhere along the line all the caveats disappeared.

Somewhere in Dr Wells's mind, I suspect, is a desire for Shakespeare to have been as handsome and debonair as this portrait, rather than the intense scruffy wordsmith he more probably was. And can it be mere coincidence that this portrait bears more than a passing resemblance to Joseph Fiennes?
Email Post
Labels: art culture history shakespeare

Edwin Moore said…
In my past life I looked after one of the complete Shakespeares, and used to get a regular supply of green-ink letters (occassionally literally green ink) from Baconian heretics, and even stranger people, who said that Shakespeare didnt write Shakespeare, and there was usually some 'back-up evidence' from the portraits. One chap had some point about the pattern of buttons on the First Folio engraving (the one Ben Jonson thought outdid life) which was rather good in its way.

Wells has a history of making authoritative pronouncements about Shakespeare that aren't that persuasive and this is one of them. I am not persuaded!

By the way, my favourite heretical view came from a nice old guy in Ireland who argued in tightly fitting lines that William Shakespeare did not write Shakespeare, it was someone else called Shakespeare.
11 March 2009 at 09:04

valdemar said…
There's a long tradition of older intellectuals going a bit loopy about the Bard: Enoch Powell and A. L. Rowse spring to mind. It seems unlikely that the portrait is of a middle-aged man, even if artists did flatter their subjects. And who cares anyway? If the 'real' Shakespeare turned out to be three Welsh lesbians who shared the same tights, I would not feel betrayed. Though I would be keen to a see a group portrait.
11 March 2009 at 16:37

Anonymous said…
I still cleave with Harold Bloom's contention that Shakespeare knew more about human nature than anyone before or since. A formidable intelligence that has never been bested.

Yet the portrait portrays hooded eyelids, traditionally associated with guile, cunning and shrewdness, rather than the folded eyelids that usually betoken warmth, ingenuousness, reserve and wisdom.

Heresiarch said…
A very interesting point, Moby, since in the Renaissance such absurd (to us) ideas about physiognomy were taken quite seriously. I like the point about "guile, cunning and shrewdness", since it goes well with the quotation from Horace. We're dealing with a minor courtier, I think.
11 March 2009 at 16:58

Anonymous said…
I'm glad you caught the humour. From the days when I took a dilettante's interest in the occult I have retained a passing familiarity with typologies. But now I find myself agreeing with Murray Bookchin's sweeping dismissal of intuitive systems as "a dead end".
12 March 2009 at 00:18