More on the alleged Shakespeare Portrait

Robert Mackey of the New York Times's Lede column has been considering the alleged new portrait of Shakespeare, with specific reference to the possible meaning of the Latin tag principum amicitias! and its implications for Shakespeare. While several press reports translated the phrase - very loosely - as "beware the friendship of princes", in its original context (one of Horace's Odes) it refers to the first triumvirate, an uneasy alliance between Caesar, Crassus and Pompey which carved up the Roman Republic until it collapsed into civil war. Gaius Asinius Pollio, Horace's dedicatee, was writing a history of the period at the time of the poem's composition - and the passage in which the phrase appears describes those events.

Despite several ingenious efforts, above the line and below it, it's hard to see in this any obvious relevance to Shakespeare. The most natural allusion would be to one of his Roman tragedies - but Shakespeare did not write a play about the First Triumvirate, and I find myself thinking that the artist could have found a more directly applicable Latin tag. Of course, the phrase can be made to fit - but then so can the quatrains of Nostradamus be made to fit current events.

I was more struck by one of the comments, which drew attention to the supposed first owner of the painting, Henry Wriothesley, 3rd Earl of Southampton. Wriothesley, pronounced "Risley" was Shakespeare's patron. The commenter suggested that the portrait might be of him - so I checked, and there is a certain similarity. 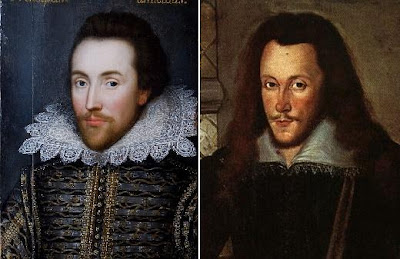 The first picture is the new "Shakespeare", the second a portrait of Southampton painted in 1603. The hairline, in particular matches fairly well, although the man in the second painting is thinner in the face. Here, by comparison, is the Cobbe portrait and the familiar "Chandos" portrait of Shakespeare, believed to be the source of the First Folio engraving. 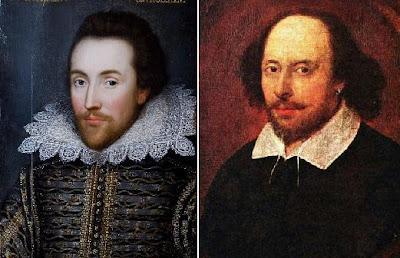 Neither matches unambiguously, but the new picture strikes me as a bit closer to Southampton than to Shakespeare. Wriothesley was about ten years younger than Shakespeare, though probably still too old for a painting dated at 1610 (on the evidence of the 1603 picture). And, to be really subjective, the subject of the Chandos painting looks like a man of relatively humble origins who earns his living with his brain, whereas the man in the Cobbe portrait looks like a pampered young fop.

There's no proof either way, but given that Southampton would seem to be a distinct possibility for the portrait's subject - and is, on the face of it, a more plausible one - it would be interesting to know on what grounds it was excluded. The attribution would even provide a better meaning for the Horatian tag. An associate of the Earl of Essex, Southampton was implicated in Essex's disastrous revolt of 1601 and only narrowly escaped being beheaded. A dangerous "alliance of princes" indeed.
Email Post
Labels: art culture history shakespeare

Edwin Moore said…
Fascinating analysis and conclusion. The 1603 Southampton portrait was (I think) painted while he was in the Tower, and in the full version he has a splendid cross-looking black cat on his lap.

Anthony Burgess is rather good on that portrait in his (unfairly neglected) book on Shakespeare.
14 March 2009 at 22:25

Anonymous said…
The latin inscription on the Cobbe portrait would more easily apply to Sir Thomas Overbury and his dreadful fate. One of the copies has been previously been identified as a possible portrait of him. WS, as a 'player' would have been unlikely to have to have worn such splendid attire for a portrait.
15 March 2009 at 00:06

Heresiarch said…
Thinking again, I find it inconceivable that the Cobbe portrait depicts Southampton in 1610 - if only beause the 1603 portrait shows him prematurely aged, presumably in consequence of his confinement in the Tower. But it is conceivable that it was painted earlier, perhaps at the time of the plot - with the superscription added later, with the benefit of hindsight.

Electro Zombie: I'm not sure how Overbury can be connected to the painting, but judging by the engraving on Wikipedia it certainly does look like him. Thanks for the tip.
15 March 2009 at 08:06

Anonymous said…
Overbury was slowly poisoned to death in the Tower Of London after attempting to thwart a relationship between his friend Robert Carr, Viscount Rochester, one of King James main advisors, and the already married Frances Howard, Countess of Essex.

The inscription on the Cobbe portrait, ' principum amicitias' , is thought to reference an ode from Horace's 'Carmen Saeculare' which warns of the 'destructive friendship of rulers'. It has an exclamation mark added which tends to emphasise the possibility of it meaning essentially ' beware the friendship of rulers - look what happened to this guy '.

Lee said…
I suspect that I made the original "it's Southampton" suggestion in your comments section, and I was dead wrong. Overbury, as Electro Zombie and many others have pointed out, has got to be the sitter.

The cat's name is Trixie, by the way (in the SH Tower portrait). That portrait was painted after Southampton's release from the tower when James I came in.

Anyway sorry to mislead you on the Cobbe, but I meant well.

Burgess fans should check out Dead Man in Deptford, a great historical novel that somehow gets overshadowed by his other fine works.
29 June 2009 at 00:48