Manchester’s Convention on Modern Liberty, organised by NO2ID is buzzing when Lucy and I arrive, half an hour late and armed with leaflets, pages of action ideas, and display boards. Organiser Dave Page of Manchester No2ID greets us, looking rather frazzled, and tells us that technical hitches meant we still didn’t have a live link up to London and that they are packed to the seams. Great turn out!

Next we are greeted by Tony Holden who I haven’t seen since International Fetish Day in January, when we leafleted Manchester shoppers about the Consenting Adult Action Network protest. I introduce him to Lucy - CAAN is so big now that lots of people don’t know each other. He’s got his laptop out and is Twittering blog updates, letting his readers know how the conference is going, announcing the arrival of CAAN’s representatives and informing me he wants photos. As we hug, I marvel at how technology has helped develop so much activism and wonder how much the government is going to restrict that over the next few years. Over his shoulder I see the live link-up to the London speeches come online. I have been excited and preparing materials for days and I feel a sudden wave of energy run through me at the thought of the scale of the event we are taking part in. This is a historic day and we are here, a little X on the map, part of a wider concern affecting so many of us: modern liberties.

We put together our display by the entrance, put out our flyers and CAAN statement sign up forms and then it's time for the break. Something in the atmosphere feels flat as people help themselves to fresh juice and biscuits - I hope that some energy can be regained after this morning’s hiccups. Really we need a bigger venue. No2ID are doing their best to make it work despite the event having greater attendance than predicted, with well over 100 people crammed into a few rooms. I rather like the grass roots feel of this event and feel a sense of impatience that others may not be so impressed. In the retelling of it, I find myself compelled to note that even this is a sign of how privileged so many of us are in this country and how many liberties we take for granted. The BDSM community events I am involved in have trouble even finding anywhere willing to let us gather, let alone participate in large-scale national activism. We need to recognise how much privilege we do have, in order to point out where we are headed if we don't fight for the liberties we are losing.

A hard choice between workshops is next. No2ID with “The Database State” and Students for a Sensible Drug Policy with “Personal Freedoms and State Controls”, but I cannot go to all three so I decide to go to see Helen Wallace of GeneWatch with “Reclaim Your DNA” because it speaks most to me as a disabled person. GeneWatch rock, I knew that already as I have come across them in the course of the work I have done on bioethics in the disabled people’s movement. I am not disappointed and Helen facilitates an interesting and informative discussion. I like the simplicity of their current campaign and will be encouraging my colleagues in the Disabled People’s Direct Action Network (DAN) to participate, as the police acquired DNA database definitely holds some of our DNA. I am informed by the legal professional beside me, who has worked with me lots of times over the years, that they took my DNA before 2005 when the state was allowed to keep it forever. Nice to meet old friends, especially ones with good memories! 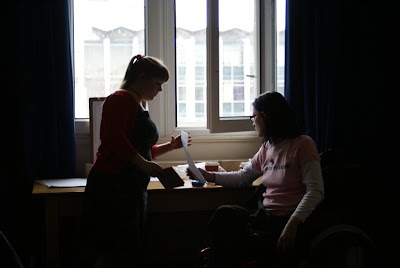 Tony Holden
Then we break for lunch and our room is prepared for our discussion on 'Sexual Freedom and the Slippery Slope'. We make space so more people can get in, as people have been sitting on the floor in each space so far, and I can get out in my wheelchair without making them all move. I feel nervous that maybe nobody will come, and then the room fills. Half of the people there have heard of the work CAAN has been doing about sexual freedoms and half not. I'm pleased new people are finding out about CAAN and wonder what they will make of what we have to say, pleased also that some of our activists and supporters are there too, to contribute and find out more about the history of the laws which have brought us to this position where the government wishes to legislate against people’s private sexual practices. People want to talk. I had been concerned that some people here would be against what CAAN is doing, but it seems not. Even better, people have attended in curiosity at how we may even have legitimate challenges to their taboos, such as that feminism and kinky porn are at odds.

After another break I watch the afternoon speeches from London but they feel long and repetitive and I wish it had more reference to the 10 conventions outside London. I feel sad at the apparent lack of moving motivational icons and felt a need for an inspiring leader, someone who can arouse passion in us all, someone who can speak until we cry or shout. It feels too academic and too relaxed. Despite the large scale of this event, it felt like people are not hungry enough yet, not angry enough yet. I am angry and hungry and I wanted to feel an energy, which didn’t come across from the speakers on the stage. It felt very British and very polite. I finally found an echo when the guy in the London audience got up and asked passionately whether the people on the stage willing to put their jobs on the line like some activists and resistors are doing. I thought of the teacher who attended the last CAAN demo in disguise because she had taken a day off and admitted where she was going, only to be told that if her face was seen in the press she’d be immediately dismissed. It takes guts to fight back from there, but she did it anyway.

CAAN will be holding our own conference, Consent 2009, in a few months. I wonder how we can keep the energy flowing and inspire each other to fight back against the tide of laws restricting our sexual choices and orientations. The time for politeness is over, our liberties are being eroded one by one, more and more of us are feeling it on a personal level and CAAN is just one of the groups working on a stack of issues facing the British people right now. Sexuality is an issue, which affects most adults in this country, and yet remains so very hard for so many people to talk about, afterall one sure fire way to prevent harmless people organising is to make them afraid they will be labelled a sex offender. It feels as if the government, not content with our well conditioned compliant manners, wants us all to be afraid too.

Overall it was a positive well attended event in Manchester, lots was learned and lots of networking was done. Myths were busted, old friends reunited, supporters collected and bonds strengthened. Shall we do it again next year? Yes, but let’s inject some energy and passion!
Email Post
Labels: civil liberties guest post Politics sexuality

I agree that people need to be angrier, I further agree that this country's growing McCarthyism is utterly shameful, but I do wonder where we can go from here. Perhaps the choice will be taken from our hands, and action will simply happen.

BTW Heresiarch, many congrats on the Orwell longlisting; I hope you will go further.
3 March 2009 at 12:03

Andrew Hickey said…
Good to see a report on this from someone who attended totally different workshops than I did - I came away with pretty much the same impression as you ( my own report is at http://andrewhickey.info/2009/03/01/the-convention-for-modern-liberty/ ) although I'm a little more optimistic about people's anger...
3 March 2009 at 12:31

Anonymous said…
Yes congratulations on your award Heresiarch - you deserve it!


Frank, we'd love you to be there - just been watching you in the Cambridge debate on Internet Censorship, brilliant stuff! here: http://www.archive.org/details/cus_2009-02-28_speaker_internet-censorship-in-uk


Andy great blog, yes same here good to read what went on elsewhere, I'm a greedy creature, I should have liked to go to ALL the workshops!


Thanks Heresiarch for including my report, and thanks again to anyone reading who attended and helped us make it s lively and interesting workshop. It got a mention in The Guardian, too! http://www.guardian.co.uk/commentisfree/libertycentral/2009/mar/03/manchester-convention-on-modern-liberty
4 March 2009 at 10:23