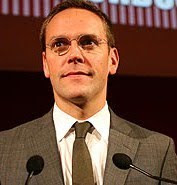 In light of recent controversies, especially given the outrageous comments yesterday made by the son and heir of the Harper Collins publishing empire in his speech in Edinburgh, I thought I'd take this opportunity to say just how much I enjoyed this August's literary selection from the BBC. We take this unique public service too much for granted; perhaps this, then, is an appropriate moment to think seriously about how diminished we would be as a nation were we forced to rely on the uncertainties of the free market for the provision of books.

For the benefit of my non-British readers, a short explanation. The British Book Council (BBC, for short) is an independent statutory body charged with selecting and distributing a package of eight books, to be delivered three times a year (in March, August and December) to every household in the country. In return, a compulsory levy, the Reading Rate (currently £153), is charged to each householder (although pensioner households receive a 75% discount, and those with children under ten are given an additional package of age-appropriate reading matter). Unlike in the United States, where people are forced to buy their own books - one result of which is the lowest literacy rate in the industrialised world - or France, where the state only subsidises impenetrable novels written by existentialist philosophers about their own sex-lives, or Italy, where the book trade is entirely controlled by Silvio Berlusconi, in Britain each household, for a modest fee, is assured a regular supply of high-quality books chosen for them by a panel of experts.

Present members of the BBC's key Selection Panel include Will Hutton, Myleene Klass, Lord Paddy Ashdown, Yasmin Alibhai-Brown and the chair, Professor Germaine Greer. Their duty - as set out in the brightly-illustrated 42-page Readers' Report - is to "produce triannually a distinctive, accessible but thought-provoking list which balances the public-service need to inform and enlighten with awareness of popular trends, prioritising both creativity and value for the Rate-payer". An almost impossible task, I think you'll agree - and one regularly undermined by the negative attitude of the Daily Mail, many of whose journalists are convinced that the panel's selections are politically biased (although, to be fair, the Mail does not call for the BBC system to be scrapped, merely reformed, with a small proportion of the Reading Rate shared with independent publishers). Still, even critics were forced to admit that this August's selection - always the most difficult - had something for everyone.

To begin with, there was the inevitable middlebrow chick-lit - Poppy Harvest, by Cecilia Cowshawe, which tells the tale of Poppy Horsley, a fashion journalist sent by mistake to Afghanistan who falls in love with a local warlord and finds eventual fulfilment designing burqas. There was a crime novel, too, the latest in the Inspector Morseford series by Valerie Daggerton, and history: I was Hitler's Dog-handler, an inside story of life at Berchtesgarten by the late Hans Graul. The history selection usually has something to do with the Third Reich or, failing that, Henry VIII - although this March many readers were absorbed by a biography of the little-known Princess Helena Von Hosenstocken, a great-niece of Queen Victoria who scandalised European high society in the Twenties by becoming a cabaret singer in Berlin.

Gardening and Cookery - the latest Delia Smith - were both represented, and we were also treated to the latest hilarious memoirs of Jonathan Ross - this last leading to an unseemly row about the amount of Ratepayers' money the BBC paid him as an advance. Another controversial choice was Global Meltdown, described as "a powerful wake-up call", which criticised the government for not investing heavily enough in wind farms. Some saw this as further proof of the BBC's politcally-driven environmentalist agenda, though others thought that the book's strong words gave the lie to suggestions that the Council is an instrument of state propaganda.

Finally, for younger readers, came the long-awaited twelfth installment of The Tamara Chronicles - which, as everyone knows, record the adventures of a three hundred year-old teen vampire at a progressive but inevitably crepuscular school for the undead.

A splendid package, I'm sure you agreed - and delivered straight to our frontdoor at no additional cost. True, not everyone will have enjoyed every single book on the list - and opportunities for resale are few, since all households receive the same selection. But then what are recycling bins for? And, of course, the wide variety that is the hallmark of BBC booklists ensures that everyone, whatever their financial status or educational level, has access to stimulating and entertaining books. Without the BBC, it has been estimated, millions of Britons would never open a book at all, leading to an incalculable cultural impoverishment both for individuals and for society as a whole. It's not as though no other books are available, at a slight premium, for those who wish to buy them: the BBC is not a state monopoly. What it does provide, though, is a basic guarantee of quality for all households, and one which has provided the backbone of our national book-reading culture over many decades. It also enables both new and established authors to develop and express their creativity free from the harsh and uncertain commercial environment.

And now here comes young Murdoch - an American by upbringing, though he is now based over here - to cast doubt on this national treasure, the envy of the world, with his frankly absurd claim that the BBC is "out of control". He argues that, especially in a recession, the BBC has a dominant and distorting impact on the book market, that it provides a kind of outdoor relief for second-rate writers who belong to an incestuous politico-literary network while skewing the political debate in a left-leaning direction. He appears to think that there is something wrong with charging people, on pain of imprisonment, for books they may not read. He even points to the free-market free-for-all that is television, where most high quality cultural and sporting content is available only to subscribers and free-to-air services offer a depressing diet of soap-operas, fly-on-the-wall documentaries about the emergency services and dance pseudo-competitions. Is that really the sort of dumbing-down he wants to see in the world of books? Yes, there is some news available, but most commentators agree that Channel 4's hour-long daily bulletin has very little depth. And yes, a free commercial channel is beginning an adaptation of Wuthering Heights tomorrow - but that only got the go-ahead when the producer told the channel's bosses that the hero, Heathcliff, was a vampire. It hardly compares to the rich brew served up three times a year by the British Book Council.

Of course, Murdoch's not the first to think such thoughts. But by and large the British book system retains a strong measure of popular acceptance. We love our BBC - and woe betide any politician who dared to disturb it.
Email Post
Labels: BBC books culture Politics