This gets my goat

So, there was this voodooist in the town of Euless, Texas, happily going about his business sacrificing goats, in the privacy of his own home, doing no harm to anyone (apart from the goats, obviously), and the local authorities tried to stop him. "Health and safety", naturally. First they tell him it's illegal to slaughter goats without a licence. So he - law-abiding citizen that he is - applies for a licence. And the permit-issuing office tells him, "Sorry, we don't do goat-sacrifice licences. We do permits for abattoirs and the like, but not in a residential area. Just stop with the goat-killing, right." 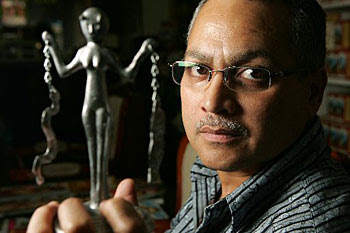 But he can't stop. Because sacrificing goats is an essential part of his religion. Because the gods he worships expect their quota of goat's blood, and you don't want to upset a god. And because under the US Constitution - not to mention a local Texas Statute - he has a right to freedom of worship. As he said, he'd been arranging goat sacrifices for at least sixteen years without any trouble, until an anonymous tip-off sent the public health busybodies round to his door. The authorities are clearly guilty of blatant discrimination, not to mention anti-voodoo bigotry.

So José Merced, whose type of voodoo is technically called Santeria, goes to court - having turned down a compromise offer that would have allowed him to carry on sacrificing chickens. The first hearing finds in favour of the local council. He then takes the case to a federal court of appeal. The council, in its submission to the court, sets out the problem:

To be clear, Merced does not want to sacrifice a goat in his home. He wants to sacrifice 5-7 goats, 1-2 turtles, 1 duck, 10-14 chickens, 5-7 guinea hens and 10-14 doves all at one time. Keeping and killing that many animals in a residential neighbourhood poses disease transmission dangers. It creates stench and filth. And it impairs the City's ability to have uniform animal regulation.

They thought they had quite a strong case:

Furthermore, said the lawyer for Euless council, sacrificing goats was "repulsive and has no place in an urban environment".

But the appellate court wasn't buying that. On the contrary, in finding in Merced's favour (pdf) they noted that he had "performed these sacrifices for sixteen years without creating health hazards or unduly harming animals." (I love that "unduly"). They pointed out that the animals only arrived at his house a few hours before the sacrifice was due to begin, that they were dispatched swiftly (so he claims, anyway) and that he took care to clean the place up afterwards. Nor were they much impressed by the council's fears that allowing Merced to do his thing would open the floodgates to unlimited goat-sacrifice which might be worse for public health. There were, after all, a mere five practising Santeria priests in the town.

The court was more moved by Merced's plight at being unable to carry out important rituals. First, the judges were careful to point out - with studied neutrality of tone - the centrality of goat-killing to the Santeria way of life:

Its practice centers around spirits called orishas, which are divine representatives of Olodumare, the supreme deity. Santeria rituals seek to engage these orishas, honor them, and encourage their involvement in the material world. Doing so requires the use of life energy, or ashé, the highest concentration of which is found in animal blood. Thus many Santeria rituals involve the sacrifice of live animals to transfer ashé to the orishas.

Deprived of the ability to carry out mass sacrifice, the court went on, Merced would be unable to initiate new priests, which was "essential to the continuation of the Santeria religion". A few chickens just wouldn't do the job. Moreover, the 250,000 Santerians in the world had only two temples, "neither in the continental United States", which meant that "home sacrifice is not only the norm, but a crucial aspect of Santeria, without which Santeria would effectively cease to exist." One possible answer to this conundrum is that the disappearance of Santeria would be no bad thing, given that it is a dark and superstitious throwback to a more primitive age, and that anyone in the modern world who believes in gods who must be propitiated by goat sacrifice deserves pity and contempt rather than legal validation. Such a thought might well have occurred to the judges a few generations ago. But these days all beliefs are of equal validity, and all religions, simply by virtue of being religion, entitled to the full protection of the law. Unlike goats.

That, indeed, was the crucial factor. As the court pointed out, Euless would have been perfectly entitled to prevent anyone who wanted to slaughter goats en masse for secular reasons. "For example, if Merced wanted to keep and kill goats and sheep because he could thereby ensure the quality of the meat he consumed, such a purpose, while meritorious, is non-religious in motivation and lies beyond [the law's] reach." However, the ban on sacrifice meant that "Merced cannot perform the ceremonies dictated by his religion". This imposed a "real and substanial" burden on him, since it forced him "to choose between living in Euless and practicing his religion".

An outfit called the Beckett Fund for Religious Liberty (actually a law firm, wouldn't you know), backed Merced, and their "National Litigation Director" described the result as a great victory for spiritual freedom. He said that they had taken on the case "not just to vindicate the rights of Mr. Merced, but also to protect the ability of every believer to worship in his own home as his conscience dictates, without undue government interference."

But then this is America, where the state does not arbitrate between sects ("The judiciary is ill-suited to opine on theological matters, and should avoid doing so" said the appeal court) and there is tolerance of a wide variety of unusual religious practices, from cults of the Heaven's Gate or Wacko variety to evangelical Christians who like to wave poisonous snakes around during worship. So what if someone wants to sacrifice goats? I wonder if the courts be so supportive in Britain.

Certainly I'm not aware of any similar cases. If there are voodoo sacrifices taking place in Britain, and there probably are, there are being done in secret. A couple of years ago a South African witch doctor announced his intention to sacrifice a chicken on stage during a performance at the Edinburgh festival; the SSPA pointed out that it was illegal, but only since the theatre was not a licensed slaughterhouse. It is (still) permitted to slaughter animals for personal consumption on your own property; however, "religious slaughter is only permitted in approved premises". In Britain, Health and Safety rules tend to take priority over questions of religious sensitivity. In 2007 Gangotri the cow was destroyed by the RSPCA on welfare grounds despite the pleas of the community attached to a Hindu temple.

On the other hand, Santerians and other voodooists might just be able to make out a claim under the Human Rights Act. Article 9 of the European convention enshrines the right of everyone "either alone or in community with others and in public or private, to manifest his religion or belief, in worship, teaching, practice and observance." This, however, is "subject to law" passed "for the protection of public order, health or morals". I haven't been able to track down any European case law on the subject. Come on, goatslayers, what are you waiting for?
Email Post
Labels: human rights law religion US politics voodoo