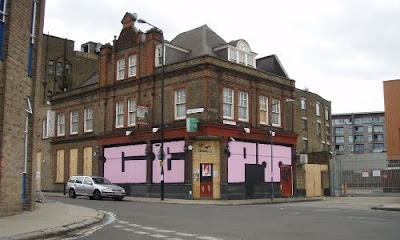 Saturday's Times brought us the story of the Sun Inn, a Herefordshire pub so old-fashioned it doesn't even have a bar - the beer being brought in from the kitchen in "foaming jugs". In one respect, though, it is like many other British hostelries - it is threatened with closure.

Pubs are closing all over Britain. The precise number varies according to who you read - the most recent figure last month was an astonishing 52 per week. But why? The recession, the smoking ban, cheap supermarket booze, the cost of drinks and changes in lifestyle all seem to play their part. I would put some of it down to the loud music most establishments insist on playing these days, which seems intended to abolish the important distinction between pubs and nightclubs and renders it nigh on impossible to enjoy a quite drink and civilised conversation. But perhaps the soulless bean-counters who now run the majority of pubs have calculated that there's more money to be made out of people who simply want to lose themselves in an alcoholic stupor. They may be right, though the thought is not a pleasant one.

In a letter to the Heresiarch, Cranmer's Curate (Rev Julian Mann) sees the pub trade's current predicament in terms of the decline of community feeling in favour in individual gratification, which he relates to the loss of Christian values - ironically, perhaps, given that the church and the tavern have rarely been natural allies. He writes:

When Mark 'Shirty' Shirtliff took on the Hare & Hound in the parish four years ago, it had a reputation as a drugs' den. Shirty cleaned the pub up by facing down the dealers and under his stewardship it developed a wholesome atmosphere. A group of us regularly went down from the church to participate in the Thursday night quiz night which Shirty started and the improvement was noticeable. This was a pub that deserved to succeed.

But back from holiday as I was going down to play tennis in the local park with our youngest son, I saw Shirty drinking outside the rival Cock Inn in the sunshine. 'Helping out the competition?' I joked rather tactlessly only to be told the sad news.

A key factor that is not sufficiently acknowledged when it comes to pub closures is the overweening egotism of post-Christian Britain. The local - whether it be the pub, the church, local theatre, brass band or other voluntary association - was supported by previous generations because it had been there before they were born and, they assumed, would be there after they had finished their brief sparrow's flight through this mortal life. We children of Woodstock, by contrast, wish to engage in community on strictly autonomous terms and appear to have genuinely convinced ourselves that we can get back to the Garden without divine intervention or at least to that part of the Garden that most suits our individual tastes.

In the highly communal society of 1st century Judaism, Jesus was criticised for social drinking. Matthew's Gospel records that he was accused by the Pharisaic establishment of being 'a glutton and a drunkard, a friend of tax collectors and sinners'. If the tragedy that has enveloped publicans like Shirty is allowed to go on, then it is to be feared that it will be much less possible to level that criticism at Christ's followers in a growing number of local communities in Britain today.

Hmm. That puts me in mind of a quote of Bakunin's, who said that "people go to church for the same reasons they go to a tavern: to stupefy themselves, to forget their misery, to imagine themselves, for a few minutes anyway, free and happy." The two national institutions, whatever their differences, do seem to be going down a similar plughole, with around two churches going out of business each week. There are almost as many churches as pubs in Britain, so superficially the religious seem to be winning that particular race to the bottom. The main difference is that while the number of churches has been declining fairly steadily for decades, the loss of pubs has been sudden and precipitous. It can't all be due to deep-seated social change.

Incidentally, the King James version renders the verse quoted above, more appositely (if misleadingly) in the present context, as "a friend of publicans and sinners". A publicanus, in Roman parlance, was a state contractor, typically engaged on collecting revenue for the government. He was allowed to screw the taxpayers for as much as he could, and could keep the surplus: a form of income-generation that seems to have been revived in recent years with, for example, car-clamping firms holding the public hostage for their own profit. Nor would it be entirely amiss to see pub owners as state-licensed tax-collectors, given the high proportion of duty included in every pint.

This thought leads me to the analysis by Hackney landlord (and druid, apparently) "John Q Publican" (he runs the independently-owned Pembury Tavern, a favoured haunt of Goths, geeks and Bohemians) over at Liberal Conspiracy last month. He attributes at least part of the problem to a legal and financial regime that he describes as "a scam even more ridiculous than the brewery-tied lease". Whereas traditionally pubs were owned and run on behalf of breweries, who may have produced characterless identikit boozers but were at least in the ale business, an increasing number of pub chains are little more than property companies. Such owners not infrequently discover that they can make more money by closing down pubs entirely and turning them into offices and apartment buildings.

The tie now binds landlords into high-level inter-corporate wholesale deals which they cannot influence, which mandate pricing, vendor and brand. The tied landlord works under monopoly conditions. Prices are rigged, and rents are set, such that a publican can turn over better than £500,000 a year and actually earn only £15,000 [1]. Relatively minor variations in local economics or politics can drive a pub’s business down the pan. The pubco bean-counter does not see this: he just sees numbers. The bottom-performing 10% of the thousands of pubs his business owns are worth more as property deals than as businesses, this year. So he sells them.

...The only benefit in this system is to the faceless corporate owners of international conglomerate companies: the plutocrats who run the Great Machine. Once a pub is gone it will not come back. Any property of such size in a town is worth more as flats than as a business; any big rural pub is worth more as a footballer’s country pile.

In the comments, JQP (besides outing himself, at least as regards the identity of his pub) describes this situation as "an explicitly anti-competitive and economically destructive industrial cartel enshrined in law".

Another interesting theory was put forward by Joe Jackson - of Is She Really Going Out With Him? fame, no less - last week in Spiked. A campaigner for traditional pubs, Jackson notes that the closures can't be down purely to economic factors, given that "pubs have thrived in previous recessions, and supermarkets have always sold cheaper booze". He thinks that pubs have lost much of their atmosphere, largely as a result of New Labour policies, including but not limited to the smoking ban. It's not just the ban, it's what the ban represents:

Traditionally, a pub is supposed to offer hospitality, tolerance, free choice, and a place to relax away from official interference. The ban goes against all of this. It also sets a terrible precedent by overruling the property rights of publicans, and prohibiting adult citizens from negotiating their own arrangements – in this case, with regard to a perfectly legal habit.

For Jackson, the smoking ban, like the need for ever more (and ever more expensive) licenses for the kind of entertainments landlords have been putting on for decades without any trouble or the spread of CCTV cameras - I would add the increasingly obsessive demands for ID - have turned pubs from places belonging to their owners, tenants and the local community (public houses, that is - houses into which the public is invited) to yet another form of impersonal public space:

I’ve been in pubs where at the stroke of 11, staff start mopping the floor around my feet with vile-smelling disinfectant. I’ve been in pubs where miserable staff start cheering when the boss decides to close at 10.15 because they’re ‘not busy enough’. The convivial landlords and cheery barmaids of old seem to be disappearing, too, replaced by scowling franchise-managers and Polish immigrants like the one who, the last time I asked for a single malt Scotch in a London pub, droned, ‘Errr, I think we haff Jack Daniels’.

The really chilling part of Jackson's article is his unfavourable comparison of the situation in Britain with what he discovered in Germany, where pub owners and pubgoers alike have a healthy disregard for official diktats:

Why should German, and especially Berlin, pubs be so much more relaxed and more fun? I’m convinced that it has something to do with freedom, and the idea of ‘us and them’. Clichés about the Germans notwithstanding, the English seem to me much more deferential to authority, and when you go into an English pub you feel, more and more, that you’re entering ‘their’ territory; an ‘official’ place, where strict rules apply, and you’d better behave and be grateful they let you in at all.

In Berlin, though, the owners and customers all seem to be ‘us’, which explains why interference from ‘them’ (smoking bans, for instance) is so strongly resisted. And the lack of regulation makes for not only a better atmosphere but, interestingly, much less ‘trouble’. I’ve yet to see a German pub with a bouncer on the door.

Three different perspectives, all fairly depressing - not least because they suggest that the epidemic of pub closures is symptomatic of a wider malaise. Of course, the word "pub" covers a multitude of different venues, and many of them - including gastro-pubs, inns specialising in real ale and some of the noisy places I wouldn't be seen dead in - are doing very well. There are others - grotty, run-down places breeding violence and drunkeness, for example, and Irish theme pubs - who would not be missed. The tragedy lies principally in small communities, where the pub has often outlasted the village shop and perhaps the church, or even the post office, to be the last remaining venue for social interaction. Dr Johnson, who would have hated characterless pubs every bit as much as Joe Jackson or JQP, once said that there was "nothing which has yet been contrived by man, by which so much happiness is produced as by a good tavern or inn." There is little, surely, that has produced quite so much misery as the constellation of factors that has seen so many such places driven to the wall.