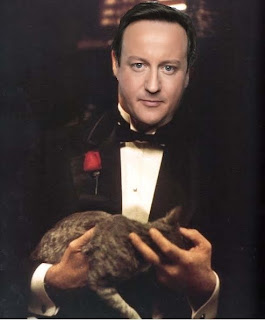 By far the most interesting thing to come out of Trevor MacDonald's profile of David Cameron last night was Samantha's revelation that her husband is a fan - indeed, an obsessive watcher and re-watcher - of Francis Ford Coppola's Godfather films.

Forget the Mafia setting, or the Italianness of the characters, or even the family dynamics. The Godfather triology is about politics - politics in its purest, most atavistic sense. Manoeuvring for power, the building, manipulation and destruction of alliances, the destabilising of enemies and the endless shifting of loyalty: this has been the stuff of politics before language itself, when our early ancestors were chimp-like primates grooming one another. The Godfather trilogy lays it all bare.

Some scenes approach the Shakespearean in their penetration and universality. It is a saga about the rise and fall of empire, the waxing and waning of power both personal and dynastic, set amid the intimate relationships and rivalries of a small elite.

The scripts abound in political epigrams that might have been penned by Machiavelli or Cicero and could prove almost as immortal. "Never hate your enemies. It affects your judgment." "Never let anyone outside the family know what you're thinking." "Finance is a gun. Politics is knowing when to pull the trigger." And, most famously of all, "Keep your friends close and your enemies closer." But it's not all backstabbing and realpolitik: we also learn, courtesy of Don Corleone, that "a man that doesn't spend time with his family can never be a real man", a lesson that most of today's politicians have taken to heart, at least for appearances' sake.

Like the Corleone clan, political parties are based on patronage and networks of informal influence. Power within the party often lies not with those who hold formal positions, but derives from personal relationships with the boss. Favours are traded, threats issued and made good on, at any time friendship may be sacrificed to ambition. Many insiders appreciate and enjoy such parallels. Martin Ivens reported last year in The Times that "a leading parliamentary lobbyist gives new recruits a set of the Godfather films to help them adapt to Westminster life." It was also reported that when Boris Johnson made unhelpful comments about Cameron's European policy, someone close to the Tory leader sent him a text message - in Italian - to the effect that revenge is a dish best eaten cold. The Evening Standard diarist Paul Waugh compared it to the famous scene from The Godfather in which Jack Woltz wakes up to find the severed head of his favourite horse laid out in his bed.

In an interview with Katie Couric before the 2008 presidential election, Barack Obama also named the Godfather films - at least the first two - as his favourite movies. He singled out the original Godfather's "combination of old world gentility and ritual with this savagery underneath." That, too, is a truth about politics. Especially our politics, in which seething hatred and ruthless character assassination, always off the record and unattributable, coexists with decorous Parliamentary conventions - lords and baronesses, right honourable gentlemen and Her Majesty's this and that - as out of date as the wigs still worn by the House of Commons clerks.

At its heart, though, the Godfather trilogy is about power - how it is won, maintained and lost in a world that is constantly shifting. A couple of years ago, John C. Hulsman and A. Wess Mitchell wrote a fascinating essay entitled Pax Corleone, which claimed that The Godfather provided a "startlingly useful metaphor" for discussing the strategic problems facing the United States in the early 21st century. For the authors, America post 9/11 was like Vito Corleone, struck down by the hitmen employed by Virgil Sollozzo. Don Corleone's sons and putative successors faced a dilemma, one personified in the three characters of Tom Hagen - adopted son and consigliere - the hot-headed Sonny and the initially reluctant Michael (played by Al Pacino).

Hagen's strategy of negotiating with the Corleone family's rising enemies has an analogue, the essay argued, in the Democrats' attachment to international institutions, while Sonny - whose response to the hit was to indulge his lust for revenge - resembled the Bush administration. Sollozzo played the role of a "rogue state" like Ahmadinejad's Iran. Hulsman and Mitchell argue that neither response is the correct one. The Hagen solution is to strive to preserve the existing system - "a kind of Sicilian Bretton Woods" - by appealing to conventions and agreements that are no longer sustainable. "Tom thinks that even a rogue power like Sollozzo can be brought to terms, if only the family will take the time to hear his proposals and accommodate his needs." Ultimately, though, such a strategy only works from a position of unassailable strength, which the Corleones (like the USA) no longer possess. Tom "thinks he is still the emissary of the dominant superpower, a delusion that many Democrats apparently share."

Sonny's aggressive assertion of Corleone power is even worse, and precipitates his own death. "In place of understanding the world, Sonny based his strategy on accosting it; the world striking back, as happened in Iraq, is an obvious conclusion." As with Tom Hagen, Sonny fails to notice that the world has changed. The only way out of the impasse is Michael's: to accept that the world has changed, that the Corleones are no longer the only mob that matters, and to work with the rising powers to construct a new order in which his family's interests can best be preserved.

Hulsman and Mitchell wondered if the next president would "match Michael’s cool, dispassionate courage in the face of epochal change". It's possible that the Copenhagen "deal" - in which the US came to a four-way with China, Russia and India, much to the EU's displeasure - represents the tentative beginnings of such an approach. But in other respects (such as the treatment of Iran), Obama - Godfather fan though he claims to be - would seem to be falling into the Hagen trap of "We oughta talk to 'em."

That's one way of reading the films as a political allegory. But it works equally well domestically - though the New Labour set-up strikes me as being closer to the Corleones than Cameron's Conservatives. Gordon Brown gained and maintains power through intimidation - carried out on his behalf by well-placed henchmen. He is the target of repeated assassination attempts, none of which ever quite work. A secretive, paranoid atmosphere prevails.

Ultimately, though, our politics lacks the operatic depth of Coppola's cinematic masterpiece. Our political elite is down-at-heel, absorbed in petty quarrels and out of tune with a world that has ceased to take them seriously. They're more like The Sopranos.