From Westboro to Washington 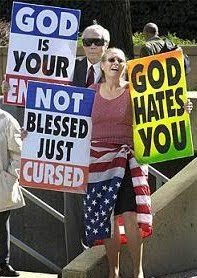 Interesting legal news from the US, where the Supreme Court has decided to hear the case of Snyder v Phelps. The Phelps in question is the Rev Fred Phelps, of the notorious Westboro Baptist Church whose USP is picketing military funerals with signs reading "God damn America", "God Hates Fags", and the like. Last year, you may remember, Jacqui Smith gave them some much-needed publicity by banning Phelps and other members of his family/congregation (the two are more or less the same) from Britain - after the Westies had expressed a desire to call down God's wrath on the sinful people of Basingstoke.

Back in 2007, the Westies were sued by the father of a Marine killed in Iraq who had been offended by the sight of the placards at his son's funeral. He told the court that he "became angry and tearful when he thought about the protest and that the memory of it had caused him to vomit." The jury awarded him $10 million in damages for "intentionally inflicting emotional distress" - which makes you wonder about the low level of libel awards in Britain, doesn't it? - a sum reduced by the judge to a mere five million. The Westies appealed - and won, on the grounds that they have a constitutional right to proclaim their hatred of gays, celebrities and US soldiers as loudly as they want.

That decision seems to accord with previous authority. In 1988, the Supreme Court found against the evangelical fulminator Jerry Falwelll, who wanted to sue Hustler magazine for publishing "a parody of an advertisement suggesting that Mr. Falwell had incestuous sex in an outhouse." The difference here is that Snyder is not a public figure. However, the court's decision to take the Phelps case has caused some surprise.

The best legal analysis of these developments is provided by Eugene Volokh, who argues that the appeal decision was correct and worries that the Supreme Court's agreement to hear the case suggests a willingness to overturn it. He is concerned about the chilling effect of restricting the Westies' right to be offensive in the era of the Mohammed cartoons - especially given the possibility of wildly disproportionate damages. "I think it’s better to protect the Phelpsians’ speech, appalling as it is, than to allow its restriction — because by allowing the restriction, we’d be giving a powerful extra tool to those who would restrict a great deal of other speech." He also argues that the whole notion of an "emotional distress tort" is unconstitutional.

The obnoxious Phelpsites, like our own Anjem Choudary, thrive on the publicity they get by their offensiveness. Banning them is invariably counterproductive. It wins them an undeserved status as free speech martyrs and brings them even more attention. Geert Wilders' appearance at the House of Lords the other day passed off without incident and far less publicity than he achieved last year by being banned. In Holland, where he is being prosecuted for expressing uncomplimentary opinions about Islam, he has become a major political force. Would he have been so successful in the absence of official attempts to shut him up?

The Westboro Baptists will relish the fact that their case has reached the Supreme Court. No doubt they will picket the tribunal with placards proclaiming God's hatred of the Justices, but I'm sure that won't have any influence on the result.
Email Post
Labels: law religion Westboro Baptists