On tour with the Pope 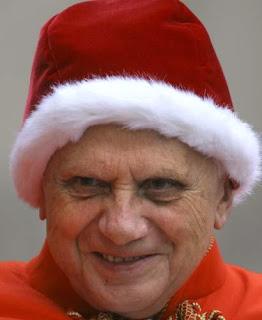 The increasingly discredited, scandal-engulfed head of the Roman Catholic church is coming to Britain in September, and now we know where we can go to boo. The Liturgical Mystery Tour kicks off in Edinburgh, where the Queen will give him the traditional lavish welcome. Her Maj is used to this kind of thing, of course. Previous guests for whom she has laid out the red carpet include Ceaucescu and Mugabe. By comparison, Ratzinger's involvement in covering up decades of child abuse in his native Germany and worldwide might seem fairly minor stuff, though not perhaps for the thousands of traumatised victims.

Then it's off to Glasgow for an open-air mass. The BBC notes that almost 300,000 people turned out to see John Paul II in 1982. But that was before all the scandals, and JP II was noted for his charisma. In Ratzo's case, the main interest will likely focus on his choice of outfit. Incredibly, according to Scotland's Cardinal Keith O'Brien quoted in The Times, the pope will use the trip as an opportunity to "give guidance on the great moral issues of our day." Clearly the spirit of irony is alive and well at the Vatican.

The doddery alleged paedophile-enabler will then shift his attentions down south. In Coventry, he will beatify an obscure Victorian theologian at another open air event. Then it's London's turn. The former Hitler Youth stalwart will "give a major speech to British civil society at Westminster Hall" perhaps, if we're really lucky, lecturing his audience on the evils of contradicting the normal order of things by giving equal rights to gay people. We're also promised "an event focusing on education" which sound rather mystifying. Somehow, though, I doubt it will focus on sex-education, which is something Ratzo might have profited from the last time he sounded off about AIDS.

He'll then meet the Archbishop of Canterbury at Lambeth Palace. How very generous of Rowan Williams to provide tea and biscuits to someone hoping to persuade traditionalist Anglicans to desert the relatively sane C of E for his own scandal-hit church - although The Times reports that he had offered an "uncharacteristically terse welcome" to the visit. Indeed the Archbeard is not generally known for his terseness. Finally, the Pope "will pray with other Church leaders at Westminster Abbey". For forgiveness, I hope.

The announcement comes at an interesting time. In Germany, there are demands - so far unmet - that the Pope publicly denounce and apologise for the cover-ups of clerical sex abuse that took place under his watch as Archbishop of Munich and, later, head of the Vatican department responsible for investigating it. Instead of tackling the problem Ratzinger at the very most did nothing and may well have colluded in the conspiracy of silence. The German revelations join those from many other countries - unusual only in that they appear to implicate the Pope personally. Cranmer thinks it "beyond question that this flood of child sex abuse cases constitute a papal PR disaster of potentially apocalyptic proportions for the Vatican." But then, as the Independent pointed out yesterday, there have been so many other PR disasters over the past few years it's difficult to keep track.

Curiously, the Tour's official website of the makes no mention of any such difficulties, unlike the National Secular Society which describes the government's invitation to the Unholy Father as "a rebuke to all those Britons who are incensed by the horrific revelations that are emerging daily about the Vatican’s activities." They're planning to give Ratzo a very warm welcome.

Christopher Hitchens has written a furious piece in Slate accusing Ratzinger of being "a mediocre Bavarian bureaucrat once tasked with the concealment of the foulest iniquity, whose ineptitude in that job now shows him to us as a man personally and professionally responsible for enabling a filthy wave of crime." For Hitchens, the pope is the man "chiefly responsible for the cover-up" of clerical sex abuse adding - taking his cue from Fr Amorth's tales of Satanic infiltration of the Vatican - that "his whole career has the stench of evil - a clinging and systematic evil that is beyond the power of exorcism to dispel."

Hitchens wrongly attributes to Ratzinger personally phrases written by Vatican lawyers in 1962, which specified that cases involving abuse be heard "in the most secretive way... under penalty of excommunication." There's no doubt, though, that Ratzinger had more than an inkling of what was going on - specifically, the policy of moving abusive clergy to other posts where, as often as not, they carried on abusing. And it isn't denied that as Archbishop of Munich he personally approved a decision to sent one notorious abuser for "therapy" to a religious retreat - rather than involving the police, as might have been more proper in such circumstances. At all stages in his career, Ratzinger has placed protecting the church, its reputation - and even its paedophile ministers - ahead of the interests of the victims or or open investigation of crime.

Damian Thompson claimed to have detected "international fury" in response to a report in The Times about the Ratzinger revelations. There's international fury, all right - but it's aimed squarely in the Pope's direction. No doubt the Pope, and his church, will survive these storms - the former is sackable only by God, the latter has come through worse. Indeed, there have been far worse popes than Ratzinger. Peter de Rosa's Vicars of Christ remains a terrific compendium of historical scandal - though it is more than twenty years old and contains nothing about the abuse scandals. Instead you can read about the likes of John XII, who was elected pope at the age of 16 and proceeded to turn to the Vatican into a giant brothel, Sixtus IV - he of the eponymous Chapel - who was said to have "waded mitre-deep in crime and bloodshed" - or the great Renaissance soap-opera of the Borgias. By the standards of his more questionable predecessors, Ratzinger is almost a saint.

He is, nevertheless, in his obduracy, his hypocrisy, his stubborn attachment to preposterous doctrines a fit symbol of the whole rotten cult. As I have argued before, the scandals currently engulfing the church not only undermine its claim to be a source of moral guidance in the world, they also spring from its self-definition as God's vehicle on earth. If you believe that the church is God's chosen mechanism for salvation, it stands to reason that its good name counts for more than justice, or the law, or the suffering of individuals in its care. Since becoming Pope, Ratzinger has positioned himself as a champion of traditional Catholic teaching - standing against a world that he sees as corrupt and decadent. Yet he has ignored the corruption and decadence of his own church. He may personally be a humble man - as his supporters claim - but his view of the church and his role in it is anything but.

I hope he has a lovely time. After all, he's most unlikely ever to come back.
Email Post
Labels: catholicism Pope priestly abuse scandals religion