Contrary to reports, Geert Wilders has not been acquitted 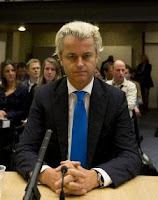 The bizarre trial of Geert Wilders for his outspoken criticism of Islam continues its merry way, despite the best efforts of the prosecuting authorities to stop it. At the end of last week, after exhaustively listing the evidence against the Dutch MP, the prosecution submitted that he had no case to answer. All three charges should be removed from the indictment. However much one disagreed with his views, lawyers argued, he had a right to freedom of speech. Presumably the defence agrees. The bench is now hearing evidence from Muslims who still want him to be convicted, including a trainee lawyer who begged the court to "protect me as a Muslim and a Moroccan against Mr Wilders". Wilders, who for years has lived in fear of his life, must have smiled ruefully at that line.

As the three charges against him (including the incredibly vague "insulting a group") were successively withdrawn by the prosecution, many observers unfamiliar with the Dutch way of doing things imagined that he had won and that his acquittal would be a mere formality. His sympathisers in blogland (of whom there are many, not all of them "Islamophobic" or right-wing) erupted in celebration. It was premature. Wilders remains on trial, and the probability remains that he will be convicted.

In Britain or the US, if the prosecution offers no evidence the trial is over. The notion that a judge (there's no jury) would overrule both prosecution and defence and find a defendant guilty is unthinkable. In the Netherlands, on the other hand, the fact that the prosecution and defence might be united in agreement that the accused has no case to answer would seem to mean very little. It's not even surprising. What most commentators forgot last week was that the Dutch equivalent of the Crown Prosecution Service never wanted to put Wilders on trial in the first place. They were forced to do so by an appeal court ruling that appeared to find him guilty before he had even been charged. Having argued at length that they had no need to bring charges, it would be at the very least inconsistent of the prosecutors to strain every sinew to bring him to justice. Their presentation of the case was always likely to be half-hearted.

The Appeal Court ruling that led to this trial was so strongly worded it reads like a final judgement rather than a technical granting of the right to proceed. "The Court of Appeal considers criminal prosecution obvious for the insult of Islamic worshippers because of the comparisons made by Wilders of Islam with Nazism," it said. It went on:

The public prosecution is of the view, amongst others, that part of the statements of Wilders do not relate to a group of worshippers, but consists of criticism as regards the Islamic belief, as a result of which neither the self-esteem of this group of worshippers is affected nor is this group brought into discredit. Some statements of Wilders can be regarded as offending, but since these were made (outside the Dutch Second Chamber) as a contribution to a social debate there is no longer a ground for punishableness of those statements according to the public prosecution.

The ruling dismissed all these contentions. It asserted that Wilders' views (I assume they mean his expression of them, but it just says "views") "constitute a criminal offence according to Dutch law... both because of their contents and the method of presentation." The views were an incitement and, moreover, "insulting as well since these statements substantially harm the religious esteem of the Islamic worshippers." And thus criminal. He could not assert his Convention right to freedom of expression because, as a politician, he had "special responsibility" - there were apparently "European standards" according to which "statements which create hate and grief made by politicians" were "not permitted." Moreover, by bringing up the Nazis (he famously said that if Mein Kampf were banned, the Koran should be also) Wilders had "exceeded fundamental boundaries".

The whole ruling - dated 21st January 2009 - is a chilling masterpiece of liberal illiberalism. It is jaw-dropping in its insistence that free speech yield to political convenience. Even those who disagree with almost every one of Wilders' opinions on Islam and immigration ought to recognise how dangerous a principle it enunciates. Clearly the Prosecutors have not been changed their interpretation of the relative value of the freedom to offend and the need to protect "groups" from insult. That may well be meaningless, however, given that the Court of Appeal all but ordered that Wilders be found guilty. Such is the Alice in Wonderland world of the Dutch courts.
Email Post
Labels: free speech Geert Wilders Islam Islamophobia Politics