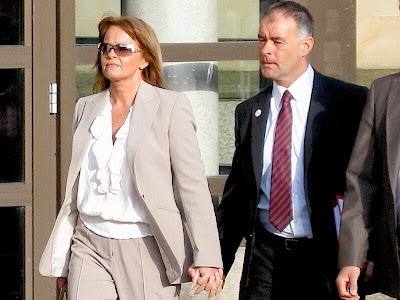 On 4 October 2010, Tommy and Gail Sheridan arrived at the Glasgow High Court to be tried for perjury. Details of the case and its cast can be found on several excellent places on the Scottish blogosphere. I recommend for starters A Very Public Sociologist and the estimable Lallands Peat Worrier (who includes the full indictment). There is also a very useful daily blog by an observer of the trial, which is expected to last 10 weeks and thus become Scotland's longest ever perjury trial. To the tabloids' delight and the mortification of the puritanical Left, the affair springs from disputed and very uncomradely memories as to whether or not Tommy Sheridan admitted to visiting a 'swinger's' club.

'. . .Scottish justice is getting a bad name from the Sheridan case. It may not have the trappings of a show trial, but Mr Sheridan's treatment thus far is beginning to look like cruel and unnatural punishment.'

Others are not so sure; the first link above makes the point that the charge sheet pertains 'to the specifics of the original trial itself'.

So what's going on? My take is that you can discount the state-conspiracy-to-destroy-left-of-Labour-in-Scotland theory. Even the British secret service could surely work out that the best way to destroy the Scottish left at present would be simply to stand by and watch it self-destruct. Putting the Sheridans on trial was always going to carry the risk of making martyrs of a couple with a young child. The exuberance with which the police went for the Sheridans seems to me to be part of the ancient Scottish tradition of seeking out the heretic (proportionately, Scotland was one of the worst witchunting nations in Europe).

Sheridan wants to overthrow the state and the cops probably see that as a threat to themselves. But as any fule know a socialist state means more, not less, cops. Perhaps Strathclyde Police haven't realised this yet.

Enough conjecture. I went along to nosey at the High Court on the 5th. It seems an odd thing to say given the huge media coverage, but on the evidence of the wee group that assembled outside court on the second day of the trial, there seems to be very little public interest in the Sheridan case. Apart from the press there are only a handful of us civilians and a very few Sherryfans. If this trial was about some X Factor person lifting a bun from Greggs you would not be able to move around here.

Not long after Sherry was elected to the Scottish Parliament in 1999, a prominent Scottish journalist wrote about how proud she was to be living in a country which had elected such a man as Tommy Sheridan to its parliament. Indeed.

One of the emerging features of the trial (I am typing this on 9 October) is the close-knit nature of Scottish politics and Scottish life. On Tuesday, the former Treasurer of the SSP, Alison Kane, had this exchange (taken from the Daily Record) with Gail Sheridan's advocate -

'Gail Sheridan's advocate Paul McBride QC - who has been tipped as a future Tory candidate - asked Miss Kane about whether there were "factions" in the SSP.
In a reply which prompted laughter in the courtroom, Miss Kane replied: "Yes - like your own."

Factionalism is a universal feature of all parties and religions, but one wonders if Scotland is particularly bad. I remember an English Tory saying to me after meeting his Scottish counterparts, 'These people aren't Conservatives - they are bigots'. Similarly, Scottish Presbyterian wrangles seem rather more toxic than, say, equivalent Anglican ones.

Arguably, Scotland created the modern world through the Scottish Enlightenment, an Enlightenment driven from Glasgow as well as from Edinburgh. It is a phenomenal achievement, something we should all be vastly proud of. Yet here we are in 2010, with the Mr Hyde version of Scotland rising into view, and barely a few decades away from sectarian policies that quietly kept Catholics out of employment in institutions such as major banks and BBC Scotland.

The journalists and writers who orgasmed over Tommy Sheridan in his early days were part of the problem - we don't need heroes to exalt into demigods to be trampled when found out to have feet of clay. Whatever the outcome of this trial may be, it is not going to be pleasant.

Reposted from Edwin's Glasgow Album, where you can read a follow-up post. He's also the author of Scotland: 1000 Things You Need to Know which, he tells me, has been no 4 on the WH Smith Scottish bestseller list for two months now.