What's offensive about a pregnant nun? 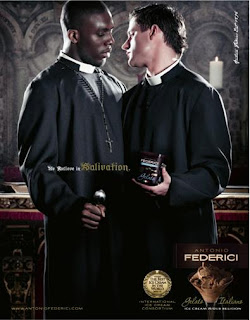 Two priests share a glance in front of an altar, and seem about to share something more than the tub of ice-cream that one has in his hands. A nun looks down at her pregnant belly, one hand holding a spoon poised over a large tub of the same brand. Offensive? The Advertising Standards Authority thinks so. It has recently banned both these adverts on the grounds that they might upset Catholics. The National Secular Society today accused the quango of seeking to "unilaterally" reintroduce the old law of blasphemy less than three years after it was abolished by Parliament.

Anyone who has seen the Antonio Federici ads knows that they are mildly humorous, in no way threatening, abusive or insulting. It is entirely wrong that these advertisements have been banned by such an unaccountable body, which needs to be reined in.

I'm not always a fan of the NSS, but I think they've got this one right. It is indeed troubling that these fairly inoffensive pictures should have been deemed - by the anonymous functionary who made this decision - to be likely to cause "serious or widespread offence" to religious people. If only on grounds of common sense. Certainly, the offence cannot have been widespread. A mere six people complained about the "gay priests" ad, while there were ten complaints regarding the pregnant nun. Last year, an even tamer ad by the same firm featuring a priest and a nun "looking as if they were about to kiss" was also deemed offensive by the ASA, again after 10 complaints.

It's not clear if anyone complained separately about all three adverts, but I wouldn't be surprised if there were some overlap. In any event, there is a maximum of twenty-six people and a minimum of ten who find these things offensive. There are supposedly five million Roman Catholics in the UK. Not all of them will have seen these ads, and some who did may have felt some offence yet not have been moved to complain. But that, too, is relevant. For given that the offence was not widespread, we must assume that the ASA deems it to have been serious. 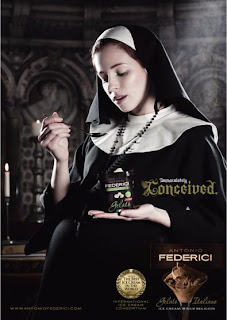 Does this image really represent "a distortion and mockery of the beliefs of Roman Catholics" as the ASA held? Scarcely. I can imagine a Catholic pedant - or even an atheistic one - being offended by the apparent misuse of the phrase "immaculately conceived" as a reference to the virgin birth and thus to the incongruity of a pregnant nun. The theological meaning of "immaculately conceived" is "conceived without sin" - but given that ice-cream is supposed to be sinful (that's the whole point of the ad, I should have thought) the line doesn't really work. That isn't why the ASA upheld the complaint, though. It imagined that Catholics might be shocked by the very idea of a pregnant nun. Yet neither history nor literature is short of pregnant nuns. Such a lapsed Bride of Christ might get well into trouble with her Mother Superior, but her existence would not mock or undermine the faith. She's just not a very good nun. First she gets herself up the duff. Then, when she should be deep into remorseful Hail Marys, she starts tucking into ice cream. First lust, then gluttony.

And anyway, it's not like she's having an abortion. A pregnant nun - continuing with her unplanned pregnancy although it has presumably ruined her career, and, indeed, still in the habit (which means that Mother Superior has forgiven her) - actually represents an affirmation of Catholic teaching, if you think about it.

As for the "gay priests", they aren't even Roman Catholics. Their cassocks clearly mark them out as Anglicans, possibly from one of the more liberal Anglican parishes that don't have a problem with gay clergy. It may in fact be that the advertisers intended the models to represent clerics of the Roman persuasion, but there is nothing either in the picture, nor in the caption ("We believe in salivation") to prove such a contention. Yet the ASA decided that "the portrayal of the two priests in a sexualised manner was likely to be interpreted as mocking the beliefs of Roman Catholics", and that was apparently that. Whether or not the advert actually mocked anyone's belief was irrelevant; it was enough merely that it could be "interpreted" in such a way. This is a ludicrously censorious interpretation of what is already a restrictive code.

Antonio Federici may not mind the further publicity that comes from having their already-seen adverts withdrawn, but the rest of us should mind. The adjudications are couched in that humourless, deadening prose we have become used to from the modern bureaucracy of "non-offence", whose effect is to make things that are humorous and trivial sound like serious and dangerous threats to society. The code itself, notes the statement without further rationale, stipulates that "particular care should be taken to avoid causing offence on the grounds of race, religion, sex, sexual orientation or disability." This is a problem. Why should religion be privileged in this way, especially when what is being satirised is not even a core belief of the faithful but merely the institutional structure and its personnel?

The NSS claim that the watchdog is surreptitiously reintroducing laws against blasphemy actually misses the point, for its rulings do not make the adverts illegal. Rather, we should be asking why advertising should be subjected to petty-minded interventions that would never be tolerated in literature or film, simply to appease the sensibilities of a tiny minority of the easily-offended. Or, more likely, of semi-professional offence-takers whose motivation is as much political as spiritual.

At the very least, the ASA seems to have an alarmingly low threshold as to what constitutes "offence" where religion is concerned. An advert need not be objectively outrageous; it's enough that someone somewhere might potentially take exception to it. The organisation is worryingly over-protective both of the supposed sensibilities of believers (who, at most, will have been mildly irritated) and of its own Holy Scripture, the Code. Perhaps they would like all advertising to be bland and inoffensive, just to be on the safe side. But as Federici told the ASA:

They did not believe offence had been so deeply felt as to affect their right, as marketers, to free expression and that offence caused to a small minority should not affect the ability of the wider public to see their ad. They believed that, as a form of art and self-expression, advertising should be challenging and often iconoclastic.

I agree. Advertising is mainly about selling things, obviously; its artistic impulse will always be secondary. Yet it is an important form of public art. The best advertisements are thought-provoking, memorable, unexpected and, yes, controversial. Advertising is also the most ubiquitous type of art. It can make a huge impact on public consciousness, much more so than most films or books. This hands the unelected, largely unaccountable ASA the powers of a censor. Banning an advert robs people of the opportunity to have their thoughts provoked by it. Potentially it impoverishes culture. The ASA should realise that it owes greater duty to society as a whole than to the unrepresentative and eccentric handful who take the trouble to complain.
Email Post
Labels: advertising blasphemy culture free speech regulation religion