Why I called Virginia Ironside a Eugenicist on live TV

I don't have a secular or religious opinion on abortion itself, believing it to be a personal issue for people to consider themselves. I do, however, have a big problem with pro-life and pro-choice campaigners using emotive disability related arguments to validate their point of view. I also have a problem with women's rights being misused as a platform from which to spread hatred and prejudice against disabled people or advocate murdering us.

I was therefore delighted to be asked to participate via webcam in a discussion about abortion with the Rev Joanna Jepson and Virginia Ironside on Sunday for the Sunday Morning Live show on BBC1 . (On the iPlayer here. You'll find the disability related part of the show at 20:30 mins.) 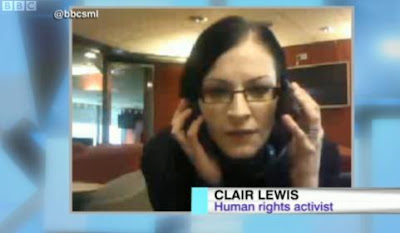 I described it as outrageous for Virginia to suggest killing is the answer to the hatred and suffering disadvantaged children face (disabled and not). In response, she went on to describe how she'd be the first to put the pillow over the face of a child who is 'suffering. Then she claimed this is what any loving mother would do, seemingly certain that this is a perfectly acceptable and typical parental response.

Ironside's shocking claim has been widely condemned, but she has her defenders, too.

Suffering is a very subjective concept, as I have outlined in detail here before. I wonder if Virginia Ironside has any disabled people in her family or neighbourhood who she might be a risk to. Her attitude is not only deeply worrying, but quite dangerous as disability something she WILL come across at some point in life.

It is fascism masquerading as equality politics when we try to pass off disability discrimination and prejudice like this as feminism. The welfare of women and disabled people are not opposed and this is not a competition for a limited quantity of equality and rights. It is misuse of the platform of women's rights and insulting to twist debates about our right to choose whether to be pregnant, or not, into opportunities to peddle a moral obligation to kill disabled infants. It is a distortion and conflation of two separate issues.

Yet women’s rights and secular prejudice has become a stick to beat anyone who opposes this sort of eugenics. This leaves me as one of few disability rights activists who will publicly speak against it. I am then labelled pro life and religious, despite being neither! This is becoming so normal these days I am beginning to feel like an honorary believer.

The problem that other points of view are virtually unheard in these important debates about disabled people’s lives. Even if it kills me, before my life is over, I vow to break the back of that problem, to get a wider variety of perspectives out there.

Why is an anti eugenic standpoint not anti choice? Simple.

The right to choose is about choosing whether to parent, not who to parent: the first is our right (within legal limits), the second is legalised eugenics. Women's right to choose expires at 24 weeks under current UK law. Unless there is grave risk to the mother's life, rape or disability as a factor, in which case later term abortions may be permitted. I am unsure why these three are thrown together, but my own experience and comment is on the disability equality issue only, the bottom line of which is probably explained best here.

There was not time to discuss on Sunday’s BBC show how almost all abortions of 'defective' pregnancies happen after 24 weeks - the date by which women must have made the choice of whether to stay pregnant. This means women, most of whom had already chosen to stay pregnant, then have to make a choice about whether to terminate their pregnancy because it is offered as standard. I believe people make those decisions under threatening medical and social/economic pressure that is almost completely one sided and unfair.

Termination is the only the only ‘fix’ on offer, or we are told to expect a life of suffering for our child and our family. There is no real choice whereby we can rely on a decent life for our child, or our families - even though in almost all cases this is fully possible. I think parents deserve fairer choices than this and deserve more balanced information.

Trying to pass off eugenics as a women’s right wrongly implicates women as responsible for the neglect of disabled people in society by making them responsible for ‘the fix’. Arguably, and ironically, the opposite is true - it’s mostly women who take care of us, whatever age we are.

Is extermination necessary and a suitable fix for a suffering infant or anyone else in their family? Suffering is around us, but in this rich pleasant land in most cases, it is not necessary and viewpoints such as Ironside's excuse, facilitate and fuel neglect and abuse instead of addressing the social problems faced by all disadvantaged people. She is excusing discriminatory policy, wrongly blaming women for eugenics, wrongly implying that women's equal rights cannot be had at the same time as disabled people's equal rights, as if these ideas are directly opposed when really those rights go hand in hand. To offer all disabled children a chance of a decent life is to offer their mother and the rest of their family a decent life too.

Disabled people, of all backgrounds and 'severities of impairment' have been fighting for our equal human rights for decades (alongside many of our parents). We are watching our equal right to exist, as promised in the Human Rights Act, being further and further eroded. It's become normal to talk of killing disabled people at any age as if is in some way helpful to us, necessary for our family, or best for the state. It's horrible for us, and very personal.

In some ways it’s easier to fight when someone is as explicit as Virginia Ironside. After all, is there really that much difference between a late term abortion and smothering an infant, apart from having someone else do the dirty work? This is why in her reply to me she smiled smugly and said she was happy with the current abortion laws. Of course she is – we’ve now effectively got a whole population screening program giving her what she wants without the need for pillows.

What Ironside and the state are promoting is eugenics. But nobody uses that word any more: advocating for killing disabled people is just normal these days.. for disabled people's own good, even (!).. but once we accept the idea that targeting any specific group of people for killing or pre-birth extermination, we are approving eugenics. This is outright discrimination while we have a law which states that only impaired infants may be terminated after 24 weeks.

I don't see this as much different to advocating for euthanasia - these ideas are based on the same principle, that some lives are unworthy, unnecessary, disposable.. a problem for all around us, best killed. I don't know when is the best date to allow abortions until, but I do think the law should be equal for all. If it's banned, ban for all. If it's ok any time, then make it any time for all. Current law is abortion rights are cut off at 24 weeks, so it should be 24 weeks whoever the entity concerned will turn out to be.

I have never heard of a women's campaign for eugenics... I believe these beliefs are handed down to the UK populace from government, who have been pushed by eugenic scientists, relying on political issue-based ignorance and false economic strategy to push though what is essentially a fascist policy that some scientists (social, medical and otherwise) have been trying to set in our culture since the Victorian era - the most successful (in their terms) examples were the Nazi programs of extermination. Most modern British eugenicists have a more slick approach and I kind of admire Virginia Ironside for her honesty.

This country has the only free, universal prenatal screening and termination program anywhere, so the notion of killing those of us who are impaired to prevent us from bringing suffering to our families is now a social norm - acceptable to do, acceptable to talk about and now campaign for more of – you know, being allowed to kill our own family members and things like that.

Killing people is still illegal, by the way.. and those of us with impairments are people too.

Ironside is utterly wrong that killing a child we love is what any good mother would do. In most situations, in reality (not intellectual debate), what good parents, a good people do is fight for our children, our loved ones, to have the best lives possible, whatever our circumstances. Yes, even us lower class plebs.