Since my New Year's Day post, evidence has continued to emerge about the "Charlotte Church countdown clock", which the singer herself told the Leveson Inquiry had run on the Sun's own website in the period leading up to her 16th birthday in 2002.

It turns out that there were two of them, neither of which, needless to say, were in any way connected with the Sun. One, which seems to be the earlier version, was hosted on Yahoo's much lamented (by some) GeoCities pages. It was plain and amateurish in style, merely showing a picture of the young singer, the message "how long left until Charlotte Church is legal?" and a ticking clock. This seems to be the clock featured in most of the reporting. It is certainly the site that was referred to in a report in the South Wales Echo of 2nd January 2002, in which the creator of the site is named as "William". There was a link on the site (which can be accessed via WayBackMachine), which takes you to a log-in page for the gossip site PopBitch. This may or may not be significant.

But there was also another clock, much more professional in appearance and with its own domain-name, www.charlottechurchconsentcountdown.com (thanks to Cath Elliott for unearthing this). This site, no less sleazy than the first, claimed to be "dedicated to the most beautiful girl....soon to be woman in the world." It carried a disclaimer to the effect that it was "no way related to Charlotte Church and does not promote sex with minors." There's no hint as to the identity of the person or persons behind the domain.

Despite reports around 2nd January 2002 from outlets including the BBC, which I naively took at face value, that the "countdown clock" had been taken down after intervention by Charlotte Church's lawyers, it's clear that both these sites were still up and running up to and indeed long after her 16th birthday. The second was last archived on 28th November 2002. The countdown was replaced by different photos and the message

Charlotte is legal! As of 21st of Feb 2002 Charlotte Church is all woman. Hip Hip Hooray! 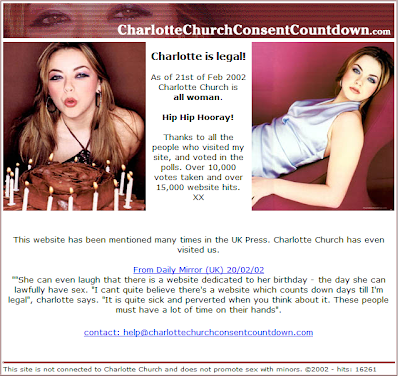 The earlier site was still visible as late as October 22nd 2004, by which time Charlotte Church was 18.

Cath Elliott notes that this site was selected as his "website of the day" on 2nd January 2002 by Matt Kelly, who was internet columnist for... the Mirror. "Should we be afraid of this website or treat it as a weird joke?" he asked. Either way, he was happy to publicise it and publish its address.

So it seems that the tasteless countdown clock was indeed promoted, if not actually hosted, by a tabloid newspaper. Just not the evil Murdoch Sun.

I suspect most of my readers won't need reminding that the editor of the Mirror at the time was one Piers Morgan.