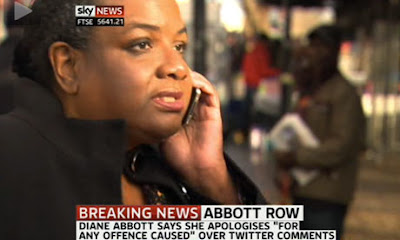 I do have a modicum of sympathy for Diane Abbott as the latest victim of Twitter's thought-police, ever-watchful for any signs of deviation from the mindless pap that passes for permissible opinions these days. Her public dressing-down by Ed Miliband was an inevitable demonstration of the pieties of modern discourse: she had Tweeted something stupid and "offensive", and while stupidity is tolerated (even encouraged) offensiveness is unforgiveable, or at least forgiveable only after a sufficiently abject apology.

Of course, she was being called out for double standards as much as for mere offensiveness. An acute racism-spotter herself, she appeared, in her comment that "white people love playing divide and rule" she was indulging in the sort of generalisation that she would undoubtedly find outrageous if aimed at black people. So to some extent she deserves her humiliation. But it's dismaying that all the noisy, self-righteous demands for her to withdraw the remark should have crowded out any consideration of whether, in fact, she might have had a point.

To say that "white people" monolithically do one thing or another is absurd rather than actually offensive. In the context of playing divide and rule it doesn't actually make any sense whatever. Which white people? When? But I imagine that when Abbott thinks about "white people" what she is imagining is the British establishment. In the days of the British empire, in non-white colonies (for example, Abbott's own ancestral Jamaica) "white people" and "British establishment" would have been virtually synonymous. And the British authorities certainly did find that "divide and rule" was a useful tactic for governing societies that might otherwise develop a single identity in opposition to the colonial power. The policy has left a long and unfortunate aftertaste in some parts of the world, most notably perhaps in India and Pakistan where British administrators deliberately taught the natives to think of themselves first and foremost as Hindus or Muslims.

The equation of "white people" and "British establishment" doesn't really work in Britain, especially not in modern Britain, where the establishment is no longer uniformly white. Yet successive British policy-makers have indeed found a policy of "divide and rule" to be useful in the context of a multi-ethnic society. Although of course it's no longer called "divide and rule". It's called "multiculturalism".

Bim Adewunmi, whose exchange of tweets with her MP precipitated the Twitterstorm, writes that her concern had been with the term "the black community" - implying as it does a monolithic entity. She writes:

Here's how it goes: a) something deemed to be a "black issue" is on the news agenda; b) Without fail, "community leaders" and the now standard "ex-gang member" are wheeled out to be interviewed. ... I hardly ever recognise any of the so-called "community leaders" on these programmes – I doubt many ordinary black people, ie those they purport to represent, ever do.

The view from Whitehall, and indeed from the BBC (and other establishment peaks as well, no doubt) is indeed something like that. A concept like "the black community", or "the Muslim community", or for that matter "the gay community" is easier to conceptualise than the notion that the public "out there" is a collection of individuals with complex, varied identities. Today, "divide and rule" politics has never been more institutionalised.

The other day, the former Met commissioner Ian Blair was on the radio, in response to the Stephen Lawrence verdicts, boasting that "this was the most profound change to the police in thirty years, as they moved from a kind of colour-blind policing that treated everyone the same to one that understood the previous experience and expectations held by different communities." So the legacy of that brutal racist murder was that citizens are no longer to be treated equally under the law? It's worth reminding Blair, and others like him, that it was not "colour-blind" policing that led to Stephen's killers escaping justice for so many years. It was policing that treated him first and foremost as black, and only secondly as a human being.

But that sort of thinking, often masquerading as liberal and progressive, is all too prevalent, and is enshrined in law, notably in the 2010 Equality Act. It comes naturally to the British establishment precisely because it is a continuation of the old idea of divide and rule. Here lies the irony of Diane Abbott's claims: she believes (or appears to) in the myth of a monolithic black community. The myth gives her a power-base, after all. She is fully engaged in the game of divide-and-rule when it means dividing blacks from whites. She seems to think of black people rather in the way that old-style trade union bosses used to think of their members, in fact. Hence her contemptuous attitude to any member of "her community" who engages in the race-relations equivalent of crossing a picket-line.
Email Post
Labels: Labour multiculturalism Politics