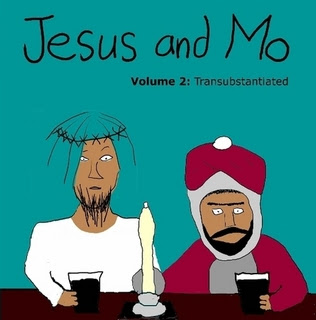 UCL's Atheist, Secularist and Humanist Society seems to have won its tussle with the student union over its "right" to use an image taken from the popular "Jesus and Mo" cartoon strip.

The union had demanded that the image be taken down, following a "number of complaints" from Muslims suggesting that the image was offensive to their sensibilities. There's no mention, incidentally, of any complaints coming from Christians, although the image of Jesus in the cartoon is every bit as satirical and thus potentially "offensive" as that of Mohammed.

(Of course, some Muslims object to the depiction of Mohammed at all, even by non-Muslims, but that is an entirely bogus argument. Muslims may make a point of principle and theology of not depicting their prophet, but such a principle cannot apply, or even have any meaning, to those who do not adhere to the religion.)

A post on the ASHS Facebook page thanks supporters, including Richard Dawkins and New Humanist magazine, and states the following:

We can now tell you that the University College London Union has recognized that mistakes were made and that the initial correspondence with our society was flawed. The Union is to review its stance on such matters and has said that this will not happen again. They can no longer call on us to withdraw the image. We welcome these developments, which set an important precedent for other universities. We also feel it appropriate to recognize the swift response of the Union, which certainly helped us reach this positive conclusion.

It is astonishing, or should be, that the right of people to be mildly satirical about sacred figures should even be in question in this day and age. No doubt UCLU thought it was being sensitive, inclusive and progressively liberal in demanding the atheist society remove the cartoon. But it was not. It was the action of illiberal bullies.

Incidentally, Jesus and Mo have their own unique take on the row, here.

And it's not over yet. Apparently, UCLU are still threatening the humanists with disciplinary action on the basis that the image might "constitute an act of bullying, prejudice, harassment or discrimination." This "could lead to the forced resignation of committee members, or disaffiliation from the Union." However, "in light of our now constructive relationship with the Union, such an event seems unlikely." Well, let's hope so.

The important message to take home from this case is that knee-jerk censorship in response to claims of religious "offence", whether genuine or (as here) plainly bogus, can and should be resisted. As Cranmer points out this morning, "it has taken many centuries of religio-political evolution, but liberal democracy has learned to permit expression of the God who laughs... So why are the thought police (aided and abetted by government) collaborating on the ascendancy of a god in whom there is no humour?" Offensiveness, in and of itself, is not something to be scared of.

Any strongly-held belief is likely to be offensive to someone. Avoiding of offence, either in words or images, is impossible in practice and undesirable in theory. People who complain about trivia, whether to the UCLU or to Ofcom or the Advertising Standards Authority, should be told to get over themselves. UCL's Atheist, Secularist and Humanist Society deserves to be congratulated. They have proved, not merely that they had nothing to apologise for, but that if you stand up to bullies they tend to back down.
Email Post
Labels: atheism censorship free speech Islam