All Done with Mirrors 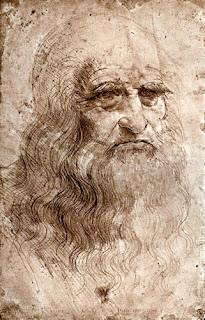 Holy Blood, Holy Grail co-author Richard Leigh, who died last week at the age of 64, would have loved this Dan Brown-style story about secret messages concealed within the works of Leonardo da Vinci.

Apparently, by playing about with mirrors you can find esoteric hidden images in some of Leonardo's best-known masterpieces. In the Last Supper, for example, images of demons and angels, as well as the Holy Grail, magically appear if you place a mirror along the length of the table and then rotate the picture. Hidden in the Mona Lisa's sleeve is what looks vaguely like the head of Darth Vader. The artist's painting of John the Baptist, when subjected to the mirror treatment, reveals what could be a naked four-legged female Buddha meditating under a tree. However, we are given to understand,

it is not a human female, as explained by Philo of Alexandria, but the symbolic name given in the Bible to the corporal sensibility (the biblical woman) that transmits the five senses to the intelligence which was symbolically called “man”.

Several videos demonstrating the technique, along with much philosophically-dense commentary of this sort, can be found on a website entitled The Mirror of the Sacred Scriptures and Paintings. It is the work of what The Telegraph describes as a "mysterious group", and is linked to a forthcoming book. Well worth a look. The pictures are pretty, even if the theory is completely bonkers.

It's a sort of Rorshach test, of course. It reminds me slightly of the work of Maurice Cotterell, who discovered messages concerning the end of the world in Mayan carvings by manipulating strips of acetate. He went on to "decode" the arrangement of the treasures from the tomb of Tutankhamun to equally enlightening effect. Come to think of it, Leigh's erstwhile colleague Henry Lincoln predicated many of his ideas about secret societies on symbolic designs he "discovered" in Nicolas Poussin's painting The Shepherds of Arcadia. The world of the esoteric is like politics or soap opera: the same old themes keep recurring in slightly different guises. There's nothing new under (or indeed in) the Sun.
Email Post
Labels: art culture general weirdness Leonardo da Vinci

Anonymous said…
We do respect our opinion and comments, and as representive of the
researchers of Mirror and Art we would like to transmit a message to
join both Christianity and Islam since our study would prove that the
Renaissance artists are not Italian and that this cultural movement
that changed the world is originally form orient and that the bible is
the history of the human soul. I'm sending you biblical versicles
that refer the images we have discovered. If you wish more
information or to contact us email us at info@mirrorandart.com


In The Last Supper Da Vinci represented the versicle Luke 22:20 that
reveals the Eucarist of the soul must be celebrated spilling the
grail, as found with the mirror between Jesus? hands: ?And likewise
the cup after they had eaten, saying, "This cup is the new covenant in
my blood, which will be shed for you.??


In the painting of Saint Anne, the virgin and child Da Vinci
represented several versicles that refer to the face hidden in Mary,
in which the holy spirit and the sword were represented with the
mirror that allows one to see the sacred image on her shoulder (Isaiah
9:5; Luke 2:35; Luke 1:35; Luke 1:46 ss).

Isaiah 9:5: ?For a child is born to us, a son is given us; upon his
shoulder dominion rests. They name him Wonder-Counselor, God-Hero,
Father-Forever, Prince of Peace.?


Luke 2:35: ?(and you yourself a sword will pierce) so that the
thoughts of many hearts may be revealed.?

Luke 1:35: ?And the angel said to her in reply, "The holy Spirit will
come upon you, and the power of the Most High will overshadow you.
Therefore the child to be born will be called holy, the Son of God.?

Luke 1:46 ss: ?And Mary said: ?My soul proclaims the greatness of the
Lord?; 47: ?my spirit rejoices in God my savior.?; 48: ?For he has
looked upon his handmaid's lowliness; behold, from now on will all
ages call me blessed.?; 49: ?The Mighty One has done great things for
me, and holy is his name.?; 50: ?His mercy is from age to age to those
who fear him?; 51 ?He has shown might with his arm, dispersed the
arrogant of mind and heart.?

Exodus 12:23: ?For the LORD will go by, striking down the Egyptians.
Seeing the blood on the lintel and the two doorposts, the LORD will
pass over that door and not let the destroyer come into your houses to
strike you down.?

Judith 16:2: ?For the Lord is God; he crushes warfare, and sets his
encampment among his people; he snatched me from the hands of my
presecutors.?

Hebrews 11;27,28: ?By faith he left Egypt, not fearing the king's
fury, for he persevered as if seeing the one who is invisible.? ?By
faith he kept the Passover and sprinkled the blood, that the Destroyer
of the firstborn might not touch them.?

Numbers 16:19,20,21: ?Then, when Korah had assembled all his band
against them at the entrance of the meeting tent, the glory of the
LORD appeared to the entire community,? ?and the LORD said to Moses
and Aaron,? ?"Stand apart from this band, that I may consume them at
once."?

Deuteronomy 28:49,50: ?"The LORD will raise up against you a nation
from afar, from the end of the earth, that swoops down like an eagle,
a nation whose tongue you do not understand,? ?a nation of stern
visage, that shows neither respect for the aged nor pity for the young.?

Deuteronomy 31:17,18: ?At that time my anger will flare up against
them; I will forsake them and hide my face from them, so that they
will become a prey to be devoured, and many evils and troubles will
befall them. At that time they will indeed say, 'Is it not because our
God is not among us that these evils have befallen us?'? ?Yet I will
be hiding my face from them at that time only because of all the evil
they have done in turning to other gods.?

Psalms 21:10: ?At the time of your coming you will drive them into a
furnace. Then the LORD'S anger will consume them, devour them with
fire.?

Psalms 68:8,9: ?God, when you went forth before your people, when you
marched through the desert,? ?The earth quaked, the heavens shook,
before God, the One of Sinai, before God, the God of Israel.?

Psalms 96:9: ?bow down to the LORD, splendid in holiness. Tremble
before God, all the earth;?

Lamentations 4:16: ?The LORD himself has dispersed them, he regards
them no more; He does not receive the priests with favor, nor show
kindness to the elders.?

Jeremiah 33:5: ?men come to battle the Chaldeans, and these houses
will be filled with the corpses of those whom I slay in my anger and
wrath, when I hide my face from this city for all their wickedness.?

Ezekiel 39:23,24: ?The nations shall know that because of its sins the
house of Israel went into exile; for they transgressed against me, and
I hid my face from them and handed them over to their foes, so that
all of them fell by the sword.? ?According to their uncleanness and
their transgressions I dealt with them, hiding my face from them.?

Ezekiel 39:29: ?No longer will I hide my face from them, for I have
poured out my spirit upon the house of Israel, says the Lord GOD.?

Zechariah 7:2: ?Bethelsarezer sent Regemmelech and his men to implore
favor of the LORD?

1 Peter 3:12: ?For the eyes of the Lord are on the righteous and his
ears turned to their prayer, but the face of the Lord is against
evildoers."?