Europe has had it, thinks Camille Paglia. Writing in Salon, the arch-iconoclast declares that the continent has "settled into a comfortable secularism" and is "no model for the future". Great art, she believes, needs religion, or at least something more psychically stimulating and uplifting than the vapid consumerism that is presently on offer. "Without spirituality in some form, people will anesthetize themselves with drink or drugs".

The great era of European achievement in arts and letters seems to be over. There are local luminaries but no towering figures any longer of the stature of James Joyce, Pablo Picasso, Marcel Proust, Thomas Mann or Ingmar Bergman. Europe is becoming a museum and tourist trap, as people from all over the world flock to see the remnants of Europe's royal and religious past -- the conservative prelude, in other words, to today's slack liberalism.

...It's as if Europe, struggling to incorporate massive Muslim immigration, has retreated into a bubble where the beautiful artifices of the past float like a mirage. Secularism evidently cannot stimulate creativity as profoundly as religion does -- whether in the artist's soaring affirmation or angry resistance.

Certainly the Europe to whose construction the finishing touches are being put today is a soulless and bureaucratic affair. Gordon Brown's no-show at the signing ceremony at a Lisbon monastery may be ridiculous - as though by not being there he can dissociate himself from the treaty (a.k.a. constitution), or perhaps give the impression to the ill-informed and gullible that it's really no big deal. It does, however, reveal how truly irrelevant such gatherings are. The European elites have an obsession with grand staircases, fresh-laid carpets, group photographs and empty speechifying, as though such things conferred profound meaning on their proceedings. Instead, they merely demonstrate the lack of vision. The EU is about power: the power of politicians and bureaucrats to make decisions behind closed doors and often contrary to logic, and then impose them on the citizens of nation states who didn't vote for them, don't need them and can't do anything, democratically, to stop them. 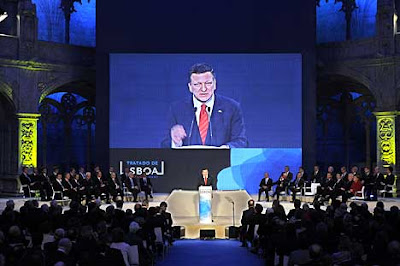 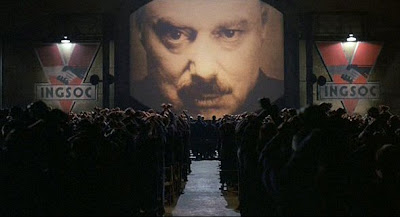 In its weasly defence of its backing out of the promised referendum on the constitution - an explicit manifesto commitment - the British government has stressed that the new treaty is "completely different". And, pressed for evidence that it is different, it offers as its prime exhibit that the EU flag and anthem are no longer enshrined within it. The flag and anthem are still present, of course: they are much in evidence at today's grand ceremony. But they aren't in the treaty. Thus what looked to all the world like the constitution of a new country is now just another treaty.

Such a childish argument shouldn't fool anyone, and doesn't. What matters are such things as the creation of an EU diplomatic corps, a permanent president and foreign minister (though in another piece of empty symbolism, he will no longer have that title), the vast increase in the scope of majority voting (which is a euphemism for the imposition on democratic governments of policies which both they and their people have voted against). Most importantly, the EU is still to gain a legal personality. It will be an international entity in its own right: no longer an association of individual countries like the African Union or even the old Eastern Bloc, it will take its place alongside the United States, India and other federal superstates. Indeed, thanks to the far-sightedness of the founding fathers, individual American states retain discretion in economic, political and legal matters which European nation states have given up.

Yet for all that, symbols matter. For with its anthem, its flag, its leaders glad-handing and mouthing platitudes (Brown excepted), as well as with such things as "youth" activities and propaganda in the classroom, the EU hopes to win itself a place in the hearts of the people who find themselves living within its borders. It wants us to be good Europeans, to dream fondly of a common European football team, to listen to Euro-pop, to develop a sense of patriotism and place. For its people to say, and think, "I am a European".

Yet it is such an empty and artificial construct, the European Union. It has all the attributes of nationhood except the one that really matters. A sense of patriotism, of belonging. A common dream. A reason, beyond itself, for its existence. In other words, a vision. It is this lack of a psychological dimension that will condemn the European project, ultimately, to failure. The eurocrats know this, but they have nothing to offer but trumpets and balloons.

Once, there was a vision. It was a vision formed of decades of war, and saw in the unification of the continent the only hope of lasting peace. Well, the wars are over; and they would probably have ended with or without the grand plans of Jean Monnet and his co-conspirators. The vision is well and truly out of date. Perhaps the European Community, as was, helped the reconstruction of a devastated continent: certainly Germany, France and the Low Countries had a better time of it in the decades after the Second World War than complacent, sluggish, unionised Britain. Now, however, as the centre of world dynamism slides inexorably towards Asia, the existence in Europe of an old-fashioned, bureaucratised, undemocratic monolith will condemn us to a lenghty stagnation.

Civilisations can give up and die. Western Europe did when the barbarians arrived in the fifth century, despite the supposedly revitalising effect of Christianity: pace Paglia, religion isn't always, or even usually, the answer. China did in the early nineteenth century, though it is now recovering. Islam, too, has long since succumbed, although its zombie-like rotting corpse now threatens to consume more than just itself. It's probably our turn once again, to be followed, soon enough, by the United States. Though in that case it is too much religion, rather than too little, that is at the root of the trouble. Yet there could still be hope, if only our leaders could abandon their attachment to the outdated and sclerotic model of a superstate and rediscover the nations and cities in which the arts and science were born.

For that to happen, however, a catalyst is needed. Such a catalyst might have been provided by a definitive rejection, by the British electorate, of the Lisbon treaty. Since British withdrawal from the EU would be disastrous for all concerned - apart from anything else, they need our money - a comprehensive renegotiation of the basis of the Union would almost inevitably follow; and what started out as British opt-outs might easily end up in opt-outs for all, as the benefits of a decentralised and truly flexible European system became more apparent. As it is, the road to a free and dynamic Europe will be longer and more painful. Perhaps the coming Great Depression will cause the whole rotten enterprise to come crashing down. Or perhaps we are, indeed, headed for slow irrelevance and ultimate oblivion.

Whatever happens, I can't imagine that the dynamic, creative, educated and successful countries of east Asia will be sparing us too much thought in the decades to come.
Email Post
Labels: culture Europe Politics