I don't want to rehash the "Archbishop rubbishes Christmas" story, which was, of course, rubbish. All Rowan Williams said, as can be seen from the transcript of his 5Live interview with Simon Mayo (helpfully provided by the Telegraph), was that many of the elements in the Christmas story that appear on Christmas cards, in traditional cribs, and in nativity plays old and new, are not actually in the Bible at all but are later accretions, elaborations and extrapolations of the bare bones of the original account. This doesn't mean they should be scrapped, of course; indeed, Williams was careful to state that the legends have their place. On the headline-grabbing subject of the Three Kings, for example, he said this:

Well Matthew's gospel doesn't tell us that there were three of them, doesn't tell us they were kings, doesn't tell us where they came from, it says they're astrologers, wise men, priests from somewhere outside the Roman Empire. That's all we're really told so, yes, 'the three kings with the one from Africa' - that's legend; it works quite well as legend.

It works quite well as legend. Indeed it does. And in stressing the worth of such legends, he's arguably less radical than the Pope: this year's Vatican Christmas crib, as I reported last week, scraps Bethlehem entirely, although the Bible (if not many modern scholars) is quite clear on this aspect of the story at least.

He does slip a bit, though:

Joseph, yes, again, the Gospels are pretty consistent that that's his father's name

Whose? Jesus's? I thought the whole point was that Joseph wasn't his father...

Anyway, I'm not going to labour that aspect of the story, except to mention, en passant, that some of the press clearly did want Williams to rubbish the Christmas story, if only so they could have a go at him. When David Jenkins stopped being Bishop of Durham he left a great hole in our national life: the slightly dotty, other-worldly liberal bishop who doesn't quite believe in the religion he's paid to promote. The non-belief isn't sufficient, of course. Richard Holloway, for many years Bishop of Edinburgh, was an out-and-out atheist, but he never really cut the mustard as a dodderer. Rowan, for all his relative youth and famed intellect, has that rather distracted, carefully-phrased air that recalls Jenkins in his pomp. If only he wouldn't spoil things by actually believing things, he would be perfect.

The big story of the interview, in fact, came later when Ricky Gervais joined the party, and expressed the view that believing in God was like believing in Father Christmas (as we say in England). Oh no, said Williams, God isn't a bit like Santa Claus. 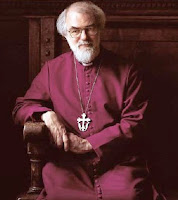 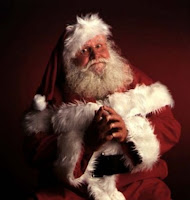 Strange that the good archbishop should denigrate someone who looks so much like him.

God, in the Book of Revelation, has the Book of Life. Santa has his list, and woe betide boys and girls whose names are down in the bad list.

Father Christmas has a work ethic that would put even Gordon Brown to shame:

He also teaches good manners. You don't just get his presents willy-nilly, you have to write and ask him politely; and, preferably, write again afterwards and say thank-you.

Admittedly, his super-powered sleigh might contribute more than its share to global warming, but on the plus side he must be the world's greatest philanthropist, giving away all those toys. In practice, of course, Santa gives better presents to rich kids, and this might might appear to contrast with the Christian promise embodied in the Magnificat:

He hath filled the hungry with good things, and the rich he hath sent empty away

But that's just saying that the practice doesn't always live up to the theory; the same might be claimed of many religions.